So,I Mustache You Some Questions

Black Dog Runs Disney is a blog I read pretty often. The author, Kimberly is a pretty insightful writer and is obsessed with Wonder Mutt, her dog. (Which is of course, black) She is also very funny. I always thought she was funny in the "hey her blog can be so funny" kind of way. It turns out she is also funny in the "ha ha, I tagged you in one of those chain posts that can be so fun" kind of way. 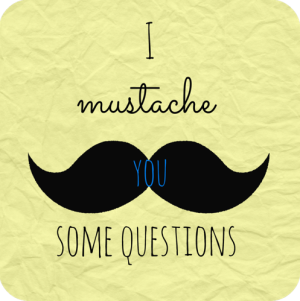 I had seen some of the blogs I follow doing this and thought it was pretty fun. Didn't think I would be tagged as I have only been tagged only once before for things like these but sure enough, Kimberly sent this one my way. That graphic above by he way, I totally stole it from her.

OK, so this particular exercise is about answering some questions about yourself and for each you have to give four answers. Here are mine:

1. Star Wars - Saying I've watched this more that once is like saying "Yeah, My Heart Will Go On" by Celine Dion has been played on the radio more than once."

4. The Lord of the Rings - I've actually seen these more than once at the theater as well as at home.

1. A Song of Ice and Fire by George R. R. Martin - The Game of Thrones saga. If you think the TV series is good...

2. Different Seasons by Stephen King - Stand by Me, The Shawshank Redemption and Apt Pupil were all made from this collection of novellas.

3. The Lord of the Rings - Greatest Fantasy book. Ever.

4. Harry Potter and the Order of the Phoenix - My favorite Potter book. Yeah, I'm a big nerd.

Four Things I Don't Eat: This was hard. I eat most things. LOL

1. Durian - Have you ever smelled those things?

Four of my Favorite Foods:

2. Friends - Still watch reruns and the DVD's. All the time.

3. Sophia the First - I'd be lying if I told you this wasn't playing in our house constantly, or any of the other Disney Junior shows for that matter.

1. Getting a Road Bike

2. Training for the Goofy Challenge

1. "Stop bothering your sister!" - Or it's many variations.

Four people to pass this on to:

Hope you guys have not been tagged before on this but if I'm tagging you it's because I'm curious to read your answers.

4. Jennifer at The Final Forty