Philadelphia Half Marathon: The Food

While it would seem from my previous post that all I ate while in Philly was Ramen -and I admit, sometimes I wished I did- I actually had a chance to eat at some cool places I would like to share with you guys. In the spirit of bringing something different, I avoided going for Cheesteaks completely and I hope you guys appreciate how hard that was because they are awesome. Though, if you want, we can talk about them. I sure have had my share of them.

Five Guys Burgers
What?! Fast food? Really? "What is going on here at The Fat Runner? Have you lowered your standards?" Well, I don't think they were that high to begin with but this is really  a case of "In the land of the blind, the one-eyed man is king."

I had this meal in Atlanta International Airport, during the longest layover in the history of humanity on the way to Philadelphia. While many of you might be familiar with this chain, they have not expanded to Puerto Rico. Strange, as this is the land where McDonald's and Burger Kings, among others, seem to grow out of the ground. I decided to mention them here because, compared to other fast food burgers, this was truly, above par. I'm kind of thankful they have not reached my shores actually. I probably would have to change the name of the blog to The Fatter Runner. 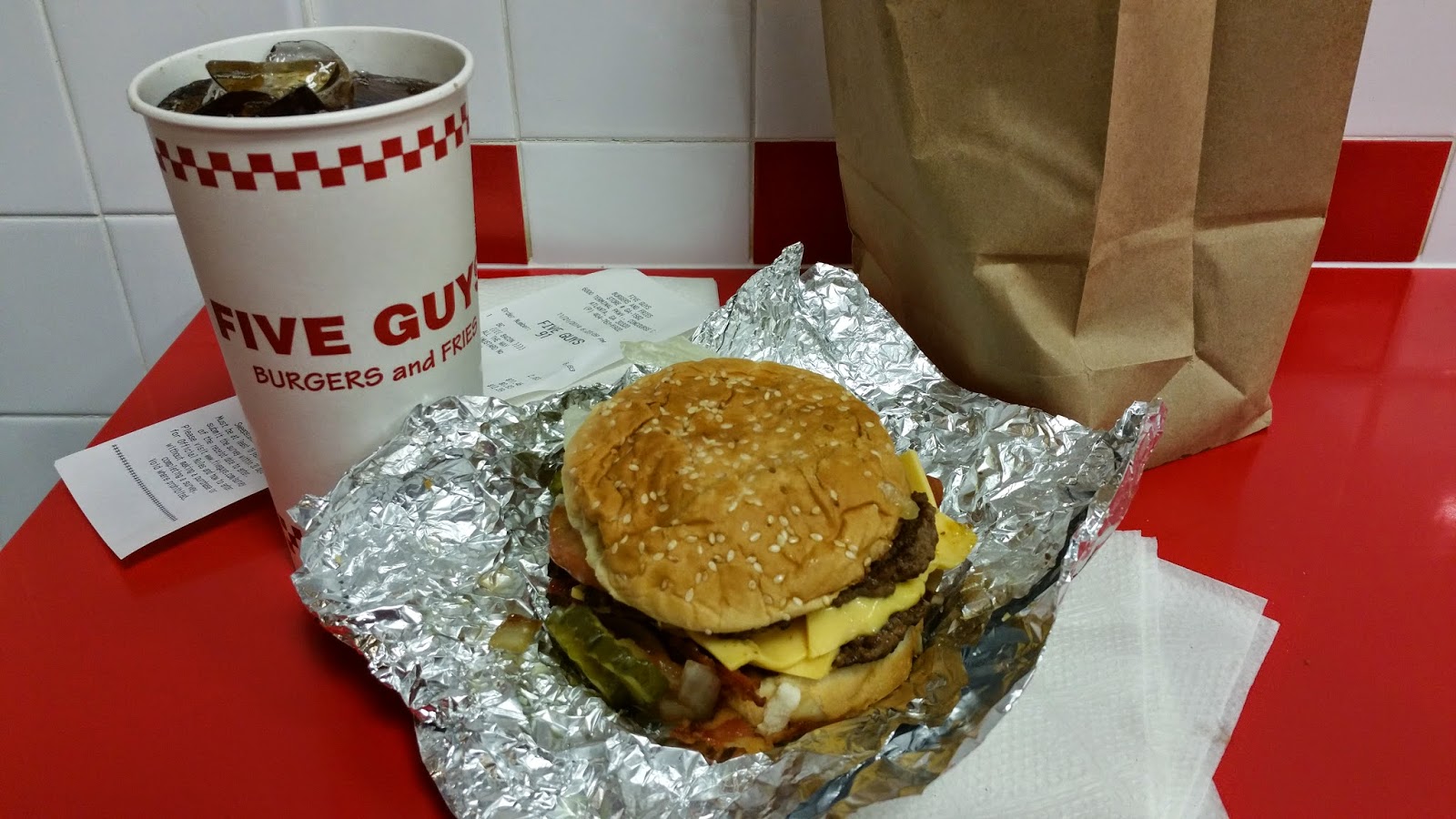 Essentially, this is fast food done right. The ingredients were fresh, the bacon was very crispy and everything made to order. While not the healthiest option, cooking burgers on a flat top is the way Nature intended. I'm not saying to go have this every day folks, but if you are gonna do a "cheat day", I can't think of a more glorious option. It certainly beats most cardboard burgers out there.

Reading Terminal Market
Not really one restaurant but an entire experience. If you don't mind the hustle and bustle of crowded places, you should go try something from this amazing place. If you think Epcot over at Disney World Resort is the bee's knees for all the different food, you should come here. Epcot has got nothing on this place. While the place is huge, it feels tiny because it is always filled with people and with good reason. You can find anything you want from most parts of the World to eat under its roof. Middle Eastern, Asian, Mediterranean, Italian, American, Latin American, Southern... I could go on. And it's not only the variety, it's all good too. It's not every day you can eat BBQ Ribs while your friend has an authentic Greek Gyro right next to you. I had some Chicken Lo Mein at a Chinese joint. Very yummy.

Federal Donuts
My friend Al took me to this place right after the race. Federal Donuts is... unique. They really only sell three things. Coffee, Donuts and Fried Chicken. 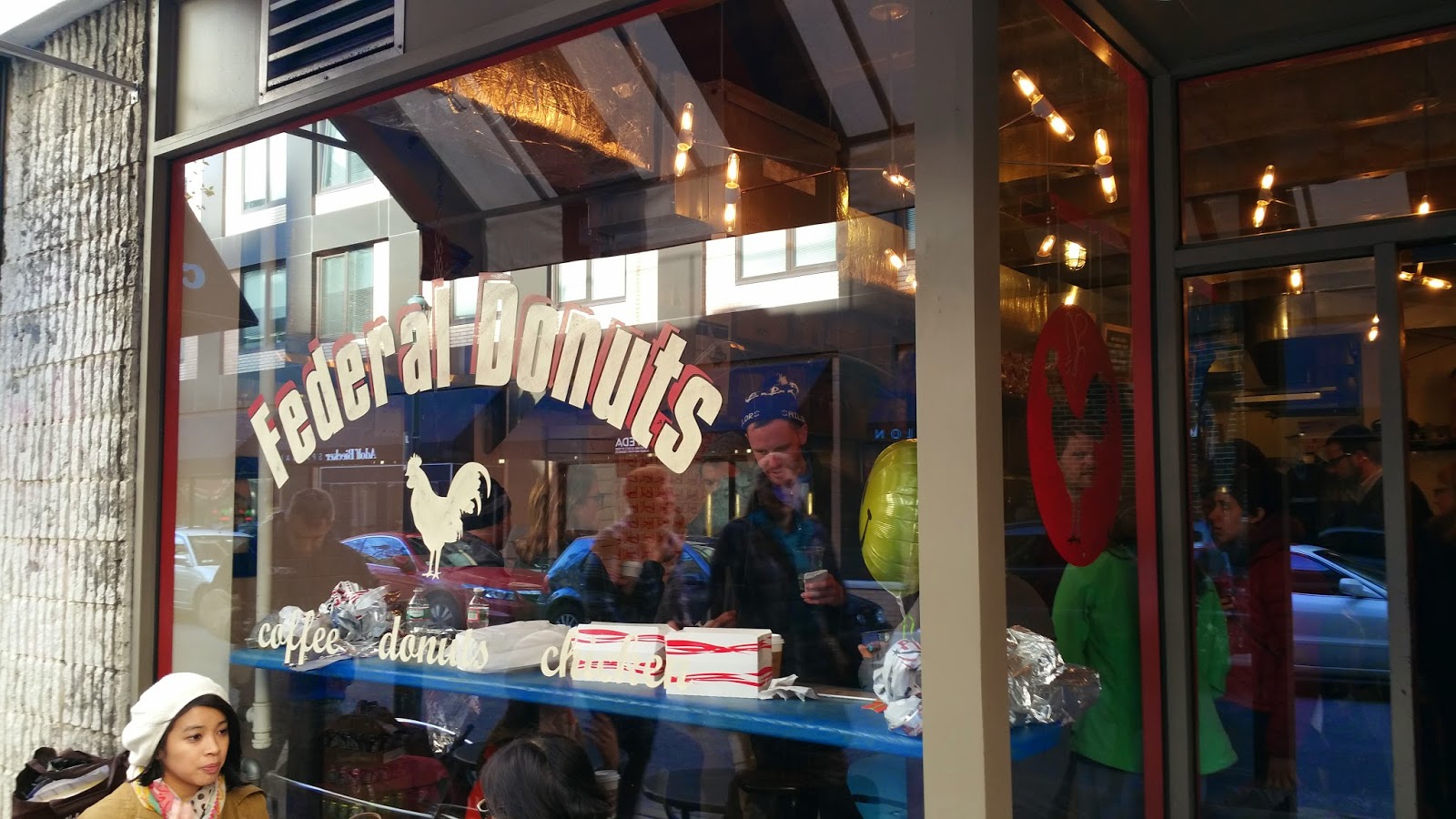 And that's it. This can be a double-edged sword for a restaurant. The phrase "simple menu" is thrown around a lot  these days but if you are gonna do only one thing, you better deliver the goods. Federal Donuts delivers and then some. Yes, the combination of chicken and donuts sounds weird but it's really not too far off the chicken and waffles combo that is so popular. Plus, it really works. The coffee and donuts are of course, a proven entity but add in the fried chicken -which you can order in several incarnations from Asian inspired to dry seasoned- and you will end up with something special. The donuts in particular stand out. Served piping hot, they really are like nothing I have ever tried before. And when I say piping hot, I mean "I can't hold them long enough to take a bite" hot.

And that is it. Those are all the interesting places I managed to fit into a weekend. Although I did not do the Cheesteak "thing" on purpose, I can't talk about Philadelphia eats and not tell you about the classic steak joints like Pat's and Geno's or my "regular" spot when I lived there, Jim's Steaks. Don't let the local passion for these places deter you from trying them all out. They are all good. In fact, I'm gonna tell you a little secret regarding the famous Pat's/Geno's turf war (they are across the street from each other in case you did not know): Their sandwiches are pretty much the same.

Please allow a minute or five for the mob with pitch forks and Eagle's Jerseys to quiet down their chants of heresy. I'm not saying they taste exactly the same. The concept of the authentic Philly Cheesteak is one and the same: Bread, Rib Eye, Cheese Whiz(yes, the radioactive orange stuff) and the option of onions (wit' or wit' out). Anything beyond that is not a Philly Cheesteak. Peppers, mushrooms, Provolone... all great and tasty additions but not authentic. So if the concept is the same, what gives?

The difference between them is the bread they use and the fact that Pat's chops their rib eye and Geno's slices it. No more, no less. So do yourself a favor and go to both joints. Better yet, go with someone else, order a sandwich from each, then share half of each right in the middle of the intersection where these two legends face each other every day. That would be the right thing to do in the City of Brotherly Love.