Ha! I know I didn't say anything about this race but I didn't want to jinx "the plan". Actually, a bunch of stuff has happened since I got back from Chicago, including my first gym workout, the very sore week that followed and a speed work session  that made the "Dri-Fit" claim in my shirt look like extremely false advertising and we will cover that at a later time but right now, it's all about racing. 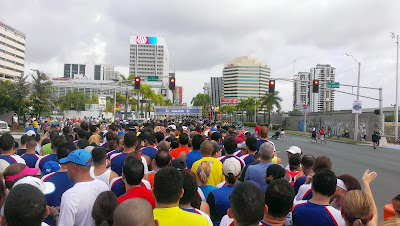 A lot closer to the Starting Line this year.

The reason I want to cover this first is that this is a special race. As the Year 2 in the title implies, this is the first race I run twice. My first race ever.  An anniversary of racing. Last year, finishing this race was both my greatest triumph and biggest disappointment all at the same time: Victory because it was my first race and I finished. I was a runner. Disappointment because on my way to that finish line I made every single mistake I could have made, including having to stop and walk halfway through. Not to mention my abysmal finishing time of 48:51. That's 18:24 minutes per mile. The Ice Age was faster than that. All that was not necessarily a bad thing, however. It drove me to do better and keep running but you know how it is. The mistakes keep nagging at you and you just want a chance to do better. 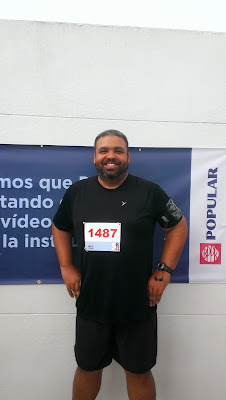 Can't get that darn bib straight. Ever! 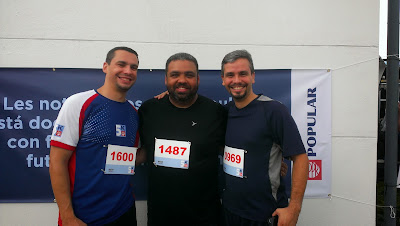 As if this wasn't personal enough, some friends of mine joined me for this race. Gilbert and Frankie are longtime friends, almost brothers. Gilbert told me he was motivated to start running by reading my blog so you know, no pressure. He is doing really well. While training for this race he had a PR of 30:01. Given the fast course and provided he didn't do anything stupid (his first race) he could very well break 30 minutes. Then again, next to me, he looks like a swizzle stick. Running with them was not in the cards this day however. They could wait for me at the finish line. I had a plan and was sticking to it. A plan so bold, so daring, that I didn't share it with anyone until now in this recap. This bold, daring strategy was something I have never been able to do in a race but I have been working hard and learned a couple of things. Assuming it works, I was coming into this race not only with the intention of achieving a PR but crushing my previous time for this race.

So after discussing strategy and getting in the corral (this time I was somewhere in the middle of the pack instead of way back) they made the announcement and we were off. Immediately  some people cut in front of me and my friends. Just as well, as I didn't want even to catch a hint of their pace (they run in the 9's) creeping into my plan of attack. As Kevin Costner in For the Love of the Game, I told myself "Clear, the Mechanism". Don't pay attention to what's going on around you and run your race. And for the most part it was working. I would occasionally look at my watch and see the pace in the 13's which is where I wanted to be during the first mile. On the other hand I was having a bit of trouble with traffic. At one moment this lady stopped cold right in front of me to tie her shoes and almost caused a pileup and then at the first water stop there was a bottleneck that made me slow down and zig-zag quite a bit. Things were happening very differently from last year. I sure wasn't being passed by walkers (runners though...) and said walkers were a bit more of a problem than last year but hey, it was a good thing because it meant I was running faster. At one point I had to run outside the marked course to pass through.

About a mile and a half in, it was time to take the hill. It was here where I stopped running last year so you can bet I wasn't about to stop now. This hill (a ramp actually) isn't very long but it gets steeper as it goes along so it's hardest point is right at the top. Well, I charged up that baby trying not to think about it too much. Once at the top I was a bit more winded than I would have liked and it took me a while to recover. I didn't slow down but I couldn't speed up which is what I wanted. I tried from this point on to not look at my watch and try to go by feel. When I felt a bit better, I picked up the pace a bit and tried to maintain it. Then I saw the finish line in the horizon and stepped on the gas. I tried to run faster but there were people everywhere and zig-zagged more during the last .1 miles than at any other point in the race. I almost screamed at people to get out of the way. Almost. And with that, it was over. 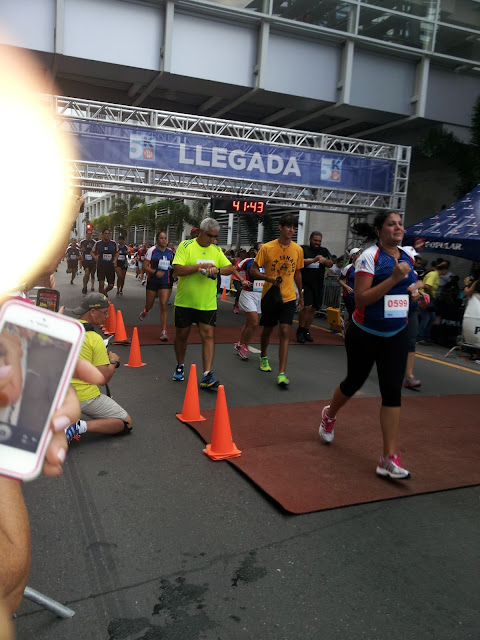 Where's Waldo. Can you spot The Fat Runner?

I stopped my watch and could not dare to look at the time. I just kept walking, got my fruit and water and my medal. Then, after getting my breath back I checked. 40:39. Here are the splits.


I wanted to crush my previous time and I guess I did. By a bit over 8 minutes. I wanted to run a negative split and as you can see in the splits, done. I also wanted to run this race under 40 minutes.

I guess you can't have everything but I'm so frustrated. I know I can run below 40 minutes and have done so in fact, here. If I had to claw and almost crawl my way to a sub-40 in that race, then what happened here? Well, a glance at the data seems to tell me I took too long to speed up after the ramp. I am vexed. I'm terribly vexed. And it showed too. My friends did the race in about 30 minutes so they didn't get to break 30 minutes either. Apparently they had some crowd troubles as well. They kept telling me I did great  and I was like (shrugging) "heh". 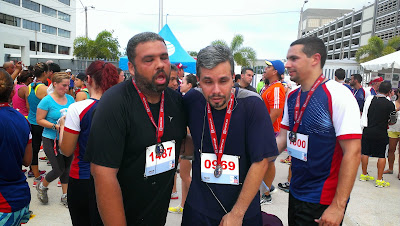