A 5K? When did this happen? I sure didn't blog about it. Wasn't I training for a Half-Marathon?

I am training for a Half. In fact I had already passed on a previous race (St. Patrick's Family 5K) because I couldn't figure out how to run the race and maintain my training schedule. However, there were some pressing reasons to go for this one. First, it was free. It's a government-sponsored race so they didn't charge anything. Free is free. I'll wait in line for some free. The second reason, I want to run a sub-40 minute 5K and wanted to see if I could do it.

This is a bit of a long post folks. Bare with me here.

The problem was my schedule. According to the plan I'm following, I was supposed to run 3 miles on Saturday followed by an 8 mile long run on Sunday. This was the first time I was to run 8 miles and I sure didn't want to miss that. I figured, I could run long on Saturday, then do the 5K on Sunday. I would still do all the scheduled runs just in a different order. Right?

Anyway, what's the big deal with running this race and breaking 40 minutes? Well, it's a personal thing. "Normal" runners do 5K's in the thirties. Even casual runners. 40 minutes? That's walking right? (Never mind the fact that I have been passed by walkers during other 5k's) Actually, it's just an arbitrary number I guess and I shouldn't let it bug me...

But it does bug me. It bugs me to no end.

During the packet pick up on Friday, they gave us a T-shirt as part of it. 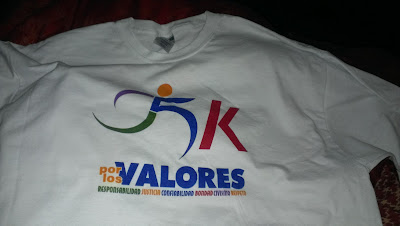 When I went to get it, the woman giving them out asks for my size. "Double X please." I say. She looks at me and asks: "Are you sure? Let me show you." Then proceeds to unfold the shirt and show it to me." Yeah, Double Extra Large. As usual." She looks at me again, then looks at the woman beside her then says: "He is not Double X." I smile, take the shirt and walk away.

I woke up early on Saturday to do the long run. I usually run in the evenings but I figured if I ran in the early morning then I would have all of Saturday and Sunday to recover. (The race was at 5 P.M.) If it went too bad I could always not run the race. Well, the first 6 miles were as perfect as a long run can be. Then the Sun came up. Not used to that. I felt like I was roasting. The last two miles were a real struggle but I made it. I felt like I was gonna die but by the time I got home I knew I was gonna run the 5K. The real question was, was I gonna race the 5K?

Continuing with my breaking 40 obsession, I spent the weekend trying to figuring out a strategy. As much of a strategy as you can come up with for a 5K. Contrary to what I thought before I started running, 5K's are not easier because they are shorter. Quite the opposite. They are more like painful devices of torture and as such, they are best endured as fast as you can. Now, during my Half training, I have to run 2 miles every Tuesday so I have taken that opportunity to try my hand at speed training. I have done that run as low as 24:05. I figured if I can come close to that and then run a somewhat mediocre third mile, I'd be in the ballpark. I could also try to start slow and then pick it up the last two miles. Or just try to run at a constant, "record" pace for the whole thing. I would figure it out when I saw how I felt at the start.

During all of Sunday, I made sure to check how I was feeling. By the time I had to go to the race, I was still a feeling a little sore but I could definitively run so I left with every intention to try to break 40 minutes. I forgot to take my wallet though and that would come back to haunt me later. At the race, they had a Zumba warm-up in which I didn't participate. Not much of a dancer. 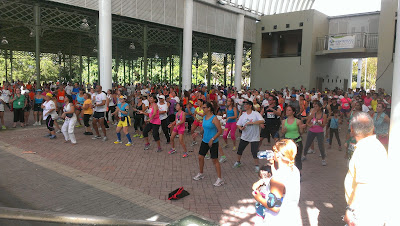 Then, it was time for the race. The course is almost identical to the Give a 5K for Diabetes I ran back in November. They had three "corrals" (walkers, joggers, runners) and I stood in the joggers section and without too much fanfare, a horn sounded and we were off.

The "corrals"? Well, they seemed more like suggestions apparently to most people and the first 200 meters was total chaos of people just trying to figure out where they were. I was trying to avoid "zig-zagging" too much as I was gonna need every bit of energy to just go forward. And folks, I was going all out. I knew there was no way I could keep that up the whole race but thankfully, there was that killer hill half a mile in to slow me down and keep me humble. 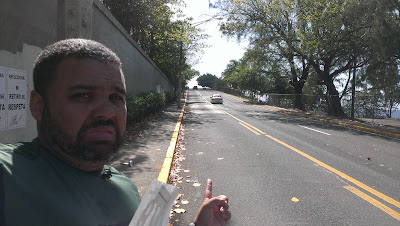 You want me to go up THAT hill?

It's a lot more challenging than it looks. I took it head on and just ran, but by the time I got to the top everything has hurting. By that time, there was no strategy, no plan... Nothing. I skipped all the water stops. I just ran and hoped for the best. Following the big hill, follows an undulating part that goes up and down. The uphill parts are not too bad but after that big hill, any hint of a hill would hurt. Legs, lungs, everything. My bib (which had the timing chip) almost blew off but I caught it and ran with it in my hand. After you pass the Capitol and a square, it's time to go back and you switch streets and go downhill for a little bit, then it's mostly flat all the way to the finish. Flat is good but I was just going too fast. (I hate saying that at my level) Shortly after finishing mile two, I had to stop and walk.

Man, was I angry with myself. Thankfully, I wasn't thinking about the how's or why's. I was just pissed that I had to stop and was not gonna brake 40 minutes. Because let's face it, there was no way I was gonna make that walking. Well, anger can act as fuel sometimes I guess, and I started to run again but I was too burned out so again, after a while I walked. I repeated this maybe three times. This was not the Galloway Run/Walk method people dear readers. That method specifies that you have to use the walk intervals before you get tired. I was exhausted. I would walk until I felt somewhat able and would then start running until I couldn't run anymore. I could see the finish line far away and I was still somewhere in the mid 30's in terms of time.

Then came the final  0.2 miles. I just took off and ran as fast as my legs would allow. My legs and lungs were killing me but I was not gonna stop. Not until the finish. I passed a bunch of people. Scared some of them I think. I thought I was gonna pass out. I almost did.

But I didn't. I barely made it, but I crossed the finish line. 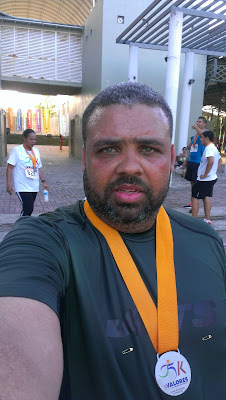 The look of an exhausted man... with no bib (check out the pins on my shirt)

And there you have it. I did it. Barely. There are many factors at play for what happened (ahem! *long run* ahem!) but I'm not gonna think about it too much now. Right now, I'm happy I made it and frankly, glad I got it over with.