Lets get this out of the way: It was great, I had fun... yadda yadda yadda. 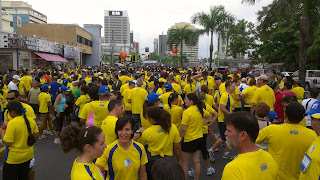 It was an extremely overcast and humid day last Sunday. While it was a bit warm, the lack of Sun made it a great day for running a race. The shadow of Hurricane Isaac was still over the island. While I was told that people do not wear the race shirt to the actual race, the starting line looked like a New York street filled with taxi cabs on rush hour. Maybe things work differently here in Puerto Rico. My wife and a good friend of ours accompanied me and gave me support. Because of the threat of rain, the girls stayed at Grandma's. 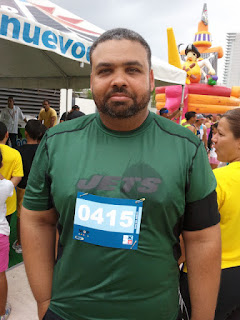 GangGreen in a sea of Yellow

Of course, nothing went as planned and all the mistakes I was planning to avoid weren't avoided at all but bear with me. Let us start with the bad.

1. I was told again and again. I read it again and again. Take it easy and don't start too fast. Yeah right. Out I went and sure enough, being at the back of the pack, I was passing people left and right. I was feeling fine so I barely noticed that compared to my usual snail pace I was sprinting like a galloping horse. Of course this didn't last too long. Which led to my next issue.

2. I couldn't run the entire way. The course was basically a rectangle. We went up one street and came down the other. The course was basically flat but on the cross from one street to the other it was uphill. My legs  simply were not going to stand for that so they went on strike and I walked up the hill. So there goes running the entire way. Just in case I needed conformation that I ran too fast, the soreness I feel today seals the deal. I haven't felt this way after running 3 miles in a while.

3. Now, one would think that since I'm not psycho or anything, I would take it easier on the way back but as soon as I started running again, Flash was back. I don't know why... Maybe subconsciously I was trying to make up for the "lost" time walking. I tried to keep it up the whole way but I just couldn't. There is a silver lining to this, but I will leave it for the good things about my first race.

4. I ran out of tunes. As I mentioned here, I had prepared a playlist that lasted 46 minutes and change. The purpose was to time myself and hopefully finish the race somewhere around the last song. (Journey - Don't Stop Believing) I fell short. It wasn't by a lot - the .1 in the 3.1 miles - but still, it stung a bit.

5. I don't know exactly what my time was. Not only are my results not showing up in the website, but I could not time it myself because when I turned on Run Keeper, the GPS was not working. Thinking I would just check the time from the race website, I turned it back off.

I wouldn't be writing this if there weren't some positive things. Right off the bat I have to say:

1. I will definitely run again. Another race I mean. The minute I crossed the finish line I was already figuring out how to run a better one next time. Which, of course, means...

2. I CROSSED THE FINISH LINE!

3. Despite my frenzied pace, I didn't walk that much. (The aforementioned silver lining to #3) Which means the prospect for a faster 5K is not that far away. The potential of a runner is starting to peek out of me. LOL

4. Not to mention the prospect of running the entire race next time. (which will be my #1 short term goal as of today)

5. Getting my first race bling. Before this race, I wasn't really thinking about it or giving it much importance. Everyone that finishes gets one after all so, why are they special? Well, you have to run a race to "get" it. If someone would have handed me one before the race I would still not care. After training like I did, running the race, and crossing the finish line, getting that medal really meant something. Even on such a short race. It really adds to your sense of accomplishment. The bag with plums and an orange they gave with the medal sure didn't hurt either. 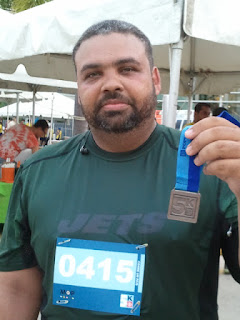 That green shirt sure got darker after the race.

There is a bunch of stuff I want to work on for next time and I will write about it on the next post but for right now, I'm basking in the glory of running my very first race.
Posted by Unknown at 10:39 AM