So on the previous episode, the gun had gone off and the 10K had started. It took 10 minutes for our corral to reach the start line. There was this arch we had to cross and I guess everyone assumed that was the actual line but about 30 feet before that I tripped on the chip sensor. There really was nothing I could do - it was still too crowded to run - but soon after the arch it cleared up a bit and I was off.

Immediately, the struggle began. "Start slow!" I kept saying to myself but between checking my pace and dodging other people, I wasn't doing a very good job. I was also all over the place, ending up on opposing edges of the course several times. Thankfully, the good news was that I was totally aware. Unlike my first (and second) 5K, where I was completely off the deep end, mentally I was relaxed. Still, the first mile came and Mr. Garmin said 14:46. I was aiming for somewhere in the mid 15's. That's when it happened. Feeling I was going too fast, I second-guessed myself and started worrying I wasn't going to finish because I was spending too much energy early and I still had that on-ramp to worry about.

And that ramp... I was worried it would be very steep. It wasn't. It was as long as an Alaskan night. It just would. Not. End. Now, you think this was a good time to back off but nope. I charged my way up that puppy. Second mile: 15:43. Not long after getting back on the bridge, (did I mention the final chase scene in the movie Fast 5 was shot on this bridge? Well, it was.) I took water from the second oasis. (I decided to skip the first.) This slowed me down and I managed to get into a consistent groove. The view didn't hurt either. Sunset, was just about to end and it made for a pretty spectacular backdrop to run in. In my (admittedly very short) racing experience, I have kind of made it a rule to not take pictures during the race but I just couldn't pass this up. Still the picture doesn't do it justice. (I was running you know) 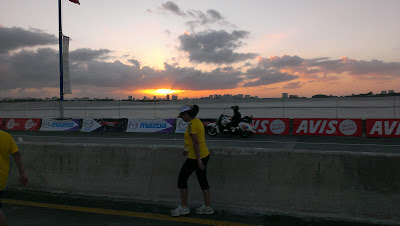 And yet, I tried again. This time with video. Didn't work either. (Again, running people!)

You know that scene in Forrest Gump, when Forrest was talking to Jenny about running in the mountains? Running with that sunset felt like that. And it really worked too because the next three miles all went down within 3 seconds of each other. Including two identical 16:06's. All this, despite the fact that when I finally made it out of the bridge, I found out that I had grossly underestimated the final leg of this course.

I thought the last two miles were on an long, mild incline and I was going to climb to the very end. Well, not exactly. I was looking at the wrong avenue. Right after the bridge was a hill and then the course kind of undulates up and down all the way to the end. So, another hill, another charge up from yours truly. Why?! "That's the painful way up you idiot!" I thought to myself. But as I made it back down and got back "normal", I realized I was actually feeling very good. With the fifth mile ending, I took the ramp to head back to the finish. One final decision before the final leg: To gel or not to gel? I was feeling fine but that was kind of the point right? To keep feeling right till the end? The final oasis was coming up so I took it out of my pocket and opened it. It was kind of warm (What did I expect? It was in my pocket after all.) but it tasted good and went down easy. It was thicker than I expected and immediately felt like dying of thirst but that's why you take it with water, which I did. Took two cups from the oasis and kept going. After washing it all down, I went back to thinking about how good I was feeling this late in the race. How I was charging up the hills and being consistent. After all my worries through the race, the training had kicked in after all. Not only was I feeling good, I was holding back. I knew I could do better.

So I picked up the pace. A lot.

By now it was night time. I could barely see the floor but I'm passing people right and left. I'm actually picking people to tail and pass. I was a little scared I wasn't gonna make it all the way to the end like this but it was a good scared. As I passed the final curve leading to the finish line I heard the faint beep of my watch. It was marking the 6th mile. I was almost afraid to look, but looked anyway. 15:14! What the...?! Is this for real? Almost an entire minute faster! And at the end?! When I'm "tired"?! And I still had plenty of gas left! I was ecstatic! So I continued to the finish. As I was reaching it, I remembered my friend Peg from the Runner's World Loop (their online forum). She always does this pose when she finishes a race. I believe she calls it the "Clay Mathews".

Well, I felt inspired to follow in her footsteps but I wasn't about to copy her signature pose so I did another one. Which one? Well, I'm not saying. There supposed to be a picture. If it comes out, I promise to post it. If it doesn't, well I'm taking that one to the Long Heavenly Trail in the Sky. He he he

So I cross, feeling great. I'm thinking about just making a fool of myself and how I still could have kept running when I remembered I hadn't stopped my watch! But hey, I started it late because of all the sensor confusion so I think it evened out. Total time? 1:37:21. Not my best time but very good nonetheless and knowing I left some out there makes me feel very good about the future.

Now for the bad news.

With the same deadly efficiency from when I arrived, the organizers had the ending down to a science. After finish, you keep walking down different stations with Gatorade, water, then some bars (the kind you eat, not the ones you go drink. Not that kind of party) and you keep going until you reach the bus areas and you leave. Everything was going great until I noticed I was awfully close to the buses and... I had no medal. That's when I saw (and heard) people complaining about it. Apparently, they ran out of medals. As people often do, they started gossiping and I heard everything from "They gave them to people without bibs." to "They stole them!" Apparently everyone who finished after 1:27 did not get a medal. Great, another reason to run faster.

I was really upset for some reason. I mean, in the one hand, it's just a piece of tin. Not getting it doesn't take away from the fact I just ran my first 10K. Yet, on the other hand, I just ran my first 10K dang it! I want something to remember the occasion. But it was not to be. With no one from the event giving any explanation, I took the bus and left. But on the bus and train I heard all these people complaining, I figured this was not over yet.

Back to the good news.

I had a feeling it wasn't over. The next day, I check the Facebook page for the race and sure enough people are coming down hard. By 10am, there's a press release apologizing and inviting all who did not get a medal to get theirs. 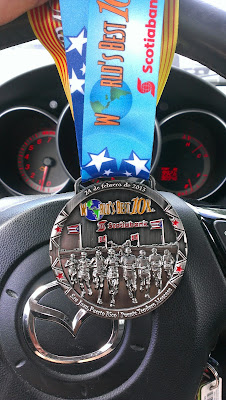 My wife mentioned that in that picture, with my car's gauges in the background it kind of looks like a Disney medal. An future omen perhaps?

So there you have it folks! I couldn't take a picture of me with the medal on race day so I got my wife to take some at home. The good thing about this is that I get to try several poses...

Here is the super-serious competitor 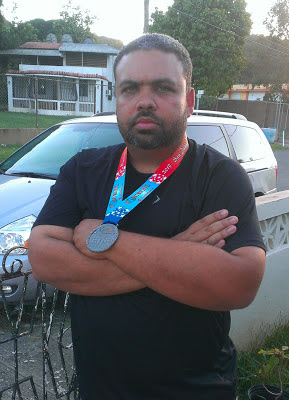 Here is the silently proud pose 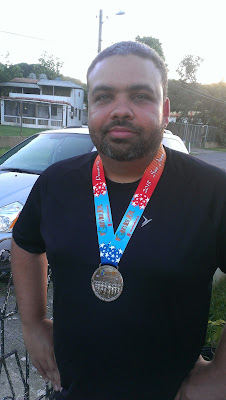 Here is the beaming with pride one 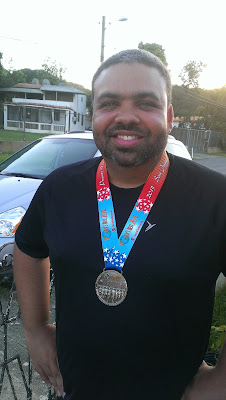 Pick your favorite and thanks for reading!