Why I do this

So I did my last long run before my first 10K. Just two more runs this week and then, the race. Can you spell excited?

Anyway, posting this a bit later than usual because February is kind of a tough, albeit special month for me. You see, it's my daughter's birthday. Which daughter you asked? Well, all three of them. That's right, my three gorgeous girls were all born in February. They are not triplets mind you, but as fate would have it they were all born in the same month. Now, this presents a bit of a logistical problem since they are not only born in February, there's only three years between them so they are all (my) babies for all intents and purposes. So instead of tip-toeing around gifts and parties and hard feelings about who got what first, we just opted to go have a day out, have dinner and some fun with some friends and family and sing happy birthday to all three at the same time. 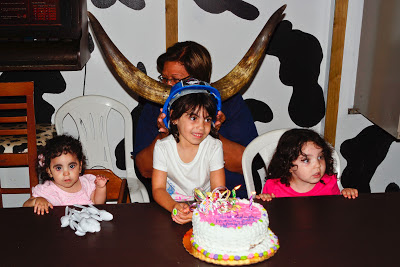 The youngest on the left (Angelica), the oldest, (Maria) in the middle and Veronica on the right.

The horns are part of the theme of the restaurant we were in, called "La Vaca Brava", (The Brave Cow) in this case the brave part means more like angry or mad, than brave. Whatever. Then of course, is the love of my life, here pictured with our youngest: 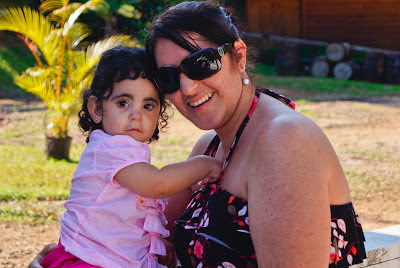 Needless to say, she has washed A LOT of sweaty dri-fit clothing this past year and has supported my insane idea to run a marathon without flinching or laughing one bit. She has also endured a lot with me these last two years. Our youngest, Angelica, was born prematurely for reasons we don't yet fully understand. She was suffering from respiratory problems (as premature babies often do) and a muscular condition that it's hard to explain. She would barely move. She was limp like she was a rag doll. She spent the first two months of her life in neonatal intensive care. For a very dark moment, I thought she was never gonna leave the NICU.

Her physical development has been slow and it has been a very tough two years filled with doctor's appointments and therapy and scary trips to the hospital but she has been my tough little warrior and today we have a beautiful little miracle. She loves her Mom and Dad and sisters. Hopefully, she will take her first steps very soon. To this day, we do not have a clear diagnosis or explanation of what happened but we have endured. And as these things often do, it has brought us together.

So what could this all possibly do with running? Well, taking pictures of my family during the birthday this weekend got me thinking about how important my family is to me and how much I want to be there for them. The whole reason I started running in the first place was because I wanted to see my daughters grow up. I wanted them to have an example they could follow and avoid the problems I had to go through because of my weight. I wanted them to be Disney fans. Something in which we have succeeded tremendously by the way. My daughters say they are all princesses. The oldest is Snow White, then in the middle we have Cinderella and the little one Aurora. They have also named my wife Belle, and while that technically makes me the Beast, I'm OK with that. 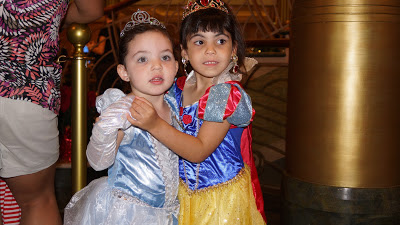 In the evenings, when I change to go running and go out the door, my daughters will ask me: "Daddy are you gonna go running?" and I answer in the positive. I guess we are doing all right.
Posted by Unknown at 10:19 PM