Allow me to get something off my chest. I hate the name of this race. The World's Best 10K. Sounds a little pretentious doesn't it? Not only that, it sounds like I'm declaring that in fact this 10K is the World's Best which I'm not so, I Have avoided saying the actual name of the race all this time as much as I can but now there's no helping it. I guess I'll just stick to calling it WB10K, which is a lot shorter too.

That's not to say the race doesn't have some impressive credentials. It is the biggest race in the island with a cap of 15,000 runners. It has also been certified by the International Association of Athletic Federations (IAAF) and given it's coveted gold rating label. Runner's World Brazil and Runner's World UK, as well as Scandinavian magazine iForm have all put the WB10K as one of the 10 races every runner should do before he dies. If you speak Scandinavian or just want to have some fun trying to understand the article you can read it here. The women's World Record in this distance was broken here in 2003 by Paula Radcliffe. 30 minutes and 21 seconds. She won more than $120,000  as part of a long standing purse that was being offered to anyone who broke a World record in this race. It still stands today. These are some of the highlights folks. I could do a whole post just talking about the history of this race. Does that make it the World's best? I leave that to you to judge. 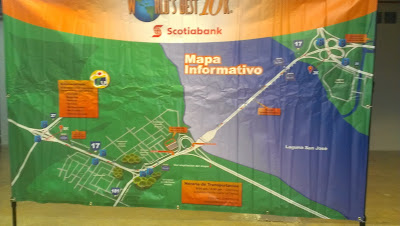 The course is pretty fast and shaped like a J. You go up the long part of the J by crossing the bridge then come back down and head all the way to the short end then go back to were you started. I had two concerns regarding the course: Once you cross the bridge, you have to get off it, go under it then get on it again. That means going uphill and those on-ramps can be pretty steep. The other concern is the final leg when you are coming back from the short part of the J. It's also uphill. While it is very subtle, it goes on for almost 2 kilometers.

My strategy was simple. Start slow, (HA! We all know how THAT has turned out in the past) cross the bridge, then pick up the pace if I can after going up the ramp. The final uphill part? Well, we'll see how I feel by then.

The race was supposed to start at 5:30pm so I had the entire day to get ready. I took it easy, hydrated myself and ate carbs during the day. (mostly white rice) I knew I was gonna go solo as my wife had to stay with our youngest one who just had surgery so I had to be careful with what to bring with me. So after figuring it out my wife took this pic right before I left. 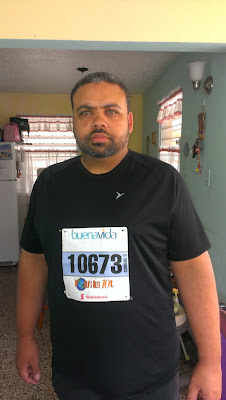 It has to be said: the organization for this race was incredible! I park my car at the station, took the urban train to the designated area and took a bus from there to the race. No fuzz, no waiting. From there you are moved to the corrals. All this flows like clockwork. There is also this whole area with booths and food and there is a track right next to the start line so you can warm up. 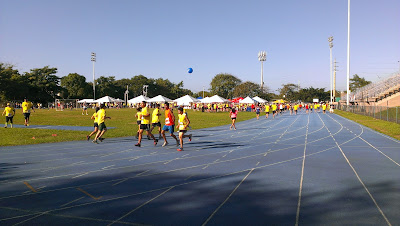 I warmed up a bit, stretched, then headed to the corral and waited for the start. Again, everything went on schedule. From the National Anthem to the start of the race everything went down to the minute as scheduled. As I picked a spot on the corral, I noticed I was right in front of the 1:30:00 pacer. Yeah, right. Wishful thinking. I moved back in between them and the 1:40:00 pacer and hoped for the best. 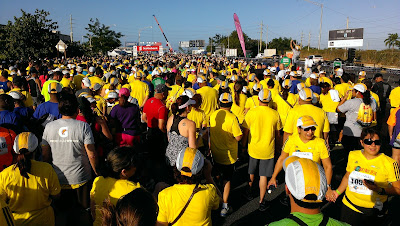 Anyway, as I mentioned the start gun went off right on schedule and about 10 minutes later we were crossing the start line. So how was the race? Well, I don't want to run too long here plus, without giving anything away, a "special" situation occurred that merits mention as well. Check out the play-by-play on the exciting conclusion of this recap.