A Tale of Three Runs

So, I had a horrendous run last week, which I detailed in my last post. However, it did got me thinking about those too-fast starts I keep talking about so I think its time I did something about it. On Tuesday, I went for a run, extremely mindful of the first mile and making sure I didn't go under 15 minutes per mile. It was hard. When you begin a run, you have all this energy and you swear to yourself that you are going slow when actually you are channeling Meb Keflezighi. This is all relative of course. I mean, if 14 minute miles were any slower I would be going back in time but it makes a difference. So did it make a difference? Let's ask my friend Garmin. Here is the Epic Fail Run:


So you see that first mile, me channeling Meb. Then by mile two, I'm already feeling it was not gonna work but I try to keep up the pace ( Meb had long left the building by then). The third mile I'm just thinking I can keep it up but I'm really just running at my normal pace (around the 16's) and then it just completely falls apart, including a totally dismal 17:41 in mile 4. But here are the 5 miles I did Tuesday:


Now that's more like it! I was very careful to take it easy in the first mile and the result was that by mile two I was feeling great. With the exception of one little hiccup I managed to stay in the 15's the entire time. New territory for me. But it was on my latest long run this Sunday where I really surprised myself. I was invited once again to run with some friends at this great linear park I mentioned a while back.

I made it very clear that I'm a turtle and they should just go ahead and do their thing. Two of the guys run 5K's in the low twenties so I had no delusions of keeping up. We warmed up, stretched and took off.  Sure enough, they started leaving me behind. I was mindful of my new "start slow" mantra but when I checked the Garmin I was up to my old tricks. But a funny thing happened. When I start too fast or when I'm going faster than usual, I can feel it. It's a general sense of discomfort in my legs that lets me know I'm biting more than I can chew. As I tried to adjust my speed, I noticed I wasn't feeling anything of the sort. I was feeling pretty good actually. As my friends faded away in front of me I soldiered on, a bit faster than usual but careful.

Two miles in, I had found a nice groove and noticed one of the runners in our group was falling behind. I was gonna pass someone! Yay! By mile three we were at the beach and it was time to head back. I just couldn't believe I was feeling so good but I kept at it. It wasn't until the very end that I ran out of steam but by then, it was almost over.

Can you believe these numbers?! Wow, I'm so happy. Of course, the course made all the difference. It's flat as a pancake so I had no hills to worry about and it made for a consistent pace. The fact that I managed to run the 5th mile in 15:19 is incredible to me. Flat course or not, I give myself a little credit here. As I mentioned in a previous post, I wrote 1:50:00 as a finish goal on the entry form for my upcoming 10K, secretly hoping for a 1:40:00 and here I am, 3 weeks from the race with a 1:31:00. If I come even close to that on race day I will be so happy! Here is are some parting shots of that last long run. The Coquí Runners, to whom I'm grateful for inviting me and the beautiful park which I love. 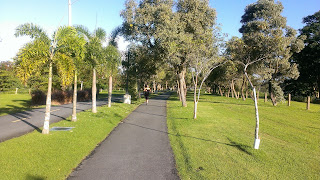 Bike lane on the left, runners on the right, a whole bunch of trees and the river. It's an awesome place to run. 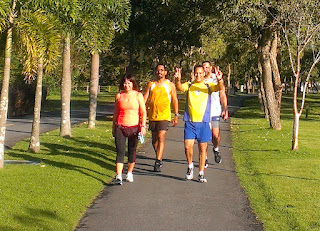 Coquí Runners. The running team that invited me. Thanks guys!