This was a pretty hectic week. Our youngest had surgery Friday. It was a minor ambulatory procedure, but a procedure nonetheless so you can guess how ecstatic me and the wife were this week. Doctor's appointments, pre-admission, very, very early mornings and the waiting... I hate the waiting while she on the operating table. It's the type of day you would gladly give back. But don't worry folks, everything was fine and the procedure was successful. By the time we got home she was laughing and playing and will recover well.

Of course, my running schedule didn't go as planned. I had two runs planned, managed only one but it was a pretty good one. I also thought I wasn't gonna be able to pick up my bib but, thank goodness, the operation went very well and we managed to leave the hospital early so after getting everyone home, medicated and resting I went back to San Juan to get my stuff.

The Expo, which by the way is my first, was pretty sweet. Because it was the first day, and it had just opened, it wasn't crowded so I breezed by registration which was extremely well organized. I signed the waiver, got my bib(10673), tested my chip (which is on the bib, not a separate item to tie on your shoes) and was given my shirt (ADIDAS!) and goodies bag. The only complaint was with my shirt. When I registered online, they did not have an option for XXL so I put XL in the form. When I got to the expo they had XXL shirts but wouldn't give me one which kind of bothered me a bit. I don't know why it bothered me, since the shirt is  a bright "runner's" yellow, just like the one from my first 5K. Do you know what running needs more of? Darker colors people!

The bag was pretty cool. 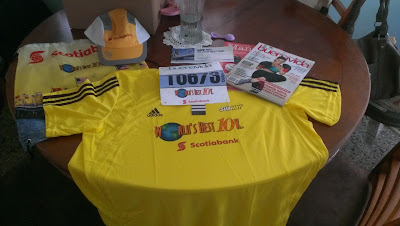 It included a hat and the bag is reusable. Plus there were some coupons and magazines. The Expo was big, which I expected since this is the biggest race in the island. Adidas had a huge presence and there were many other sponsors giving samples and promotions. There were also fitness demos, massage tables, free temporary tattoos (??) and even spinning classes. One ironic thing though: This is the Health and Fitness Expo. You know what there was a lot of? Food. There were samples everywhere of cookies, pasta and the expected runner stuff (energy bars, gels etc.) There was even a cooking demonstration and I was handed a whole bottle of chocolate milk at one of the booths. Not a sample. A whole bottle. I felt a little guilty because, honestly I tried most of it. 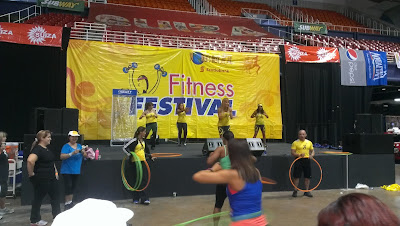 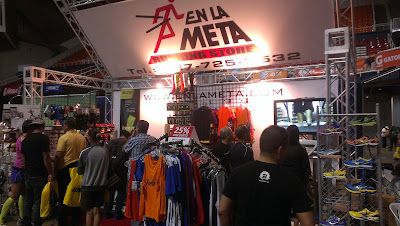 En La Meta, the local running store I try and support (when they have stuff in my size) had a booth and you know who was there? Super-Fit Girl! I don't think she remembered me though. I bought a couple of things: 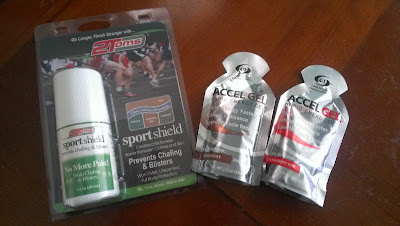 The sport shield is for chafing. For a while now, I've been having issues in my... um, nipular area and it was about time I tried to do something about it. The gels... up to this point, I haven't used anything during my runs. Basically because I hadn't had a need for it. I guess my runs were too short to merit Gatorade or a fueling strategy during the run. However, during all the 6-mile runs I did for this race, I finished feeling very weak and parched which has got me thinking about what I can do to avoid this. There was a lady at the booth representing these gels (AccelGel) and she gave me the basics of in-flight fueling (I know that's not the correct term but that's what I'm reminded of) I told her I was essentially running out of gas at the very end of my long runs and she suggested I use a gel right in the middle of the race to help me finish stronger. I have no idea if I'm gonna use it. I know you shouldn't try anything new during a race but I also want to finish strong and you know I'm gonna run harder during the race so I'm kind of stumped on this one. Will accept suggestions. Either at the race, or on a later practice run, I will try these out and let you know how it goes.

There was a lot of other interesting stuff and a whole weekend's worth of presentations and activities but after a little while I went back home for obvious reasons. Next stop: The World's Best 10K!