What a week. Just as I was hoping to get at least a final run before my first 5K, a Tropical Storm of all things makes certain that it will not be so. Ever since last weekend, we have been watching this thing develop into a Storm and heading towards the island. What's worst, it was preceded by a band of rain that started on Monday (Usually it gets eerily calm and rain-less just before a storm). So my Tuesday run? Scratched. Thursday? Ditto. I was hoping to get one in today at the very least but its not looking good. We are still getting the tail end of Isaac.

The good news? Well, several good news actually. Isaac did not pass the island head on. It just kind of grazed us on the southwest and while there has been a lot of rain, it could have been much worse. Also, since we are practically out of danger, it has been announced that the race will be held as scheduled so I went down to Popular Center to pick up my bib and shirt. There was a very long line but it moved fast. Apparently they are expecting 5,000 + runners and so far there are 4,500 and something registered online so it looks like they are going to pass that target.

Here is the shirt: 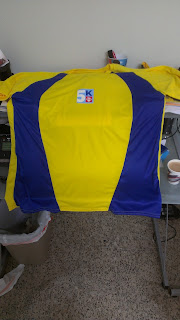 Why does running stuff have to be so... bright?! I hate wearing yellow. The shirt looks nice and I like the design but the color.... 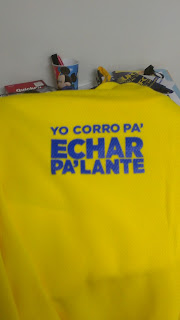 This is the back. It says: "Yo corro pa' echar pa' lante." It is kind of a slang way of saying "I run to move forward." I have been told that it is a common rookie mistake to wear the shirt you are given on a race to the actual race itself so I will be wearing my new favorite Jets running shirt. 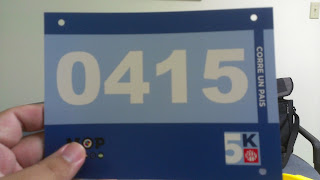 My bib. I was one of the first to register it seems. Am I excited or what? 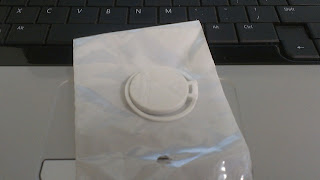 The "Champion Chip" used to record your time. I know you put it in your shoe but I have no idea how so I will probably wait 'till the race and copy somebody.

So there you have it. Two days to go and the last run I had was last Saturday. We already discussed that little fiasco here. I sure wish I'd be heading into this first 5K with a bit more confidence. While I'm sure I will not be losing a lot of conditioning with just a week of inactivity it still makes me wonder. If everyone has told me something, is that the race is very different from training. Despite my doubts, overall I feel excited. You know, the good excited so we will see.
Posted by Unknown at 2:54 PM