The Fat Runner in the The Machine

We start 2015 with a big announcement. As those of you who follow me on Instagram already got to see, I finally bought a road bike! It was a very long time coming and I can forget about buying anything for any occasion for the next several years but I finally got a bike. 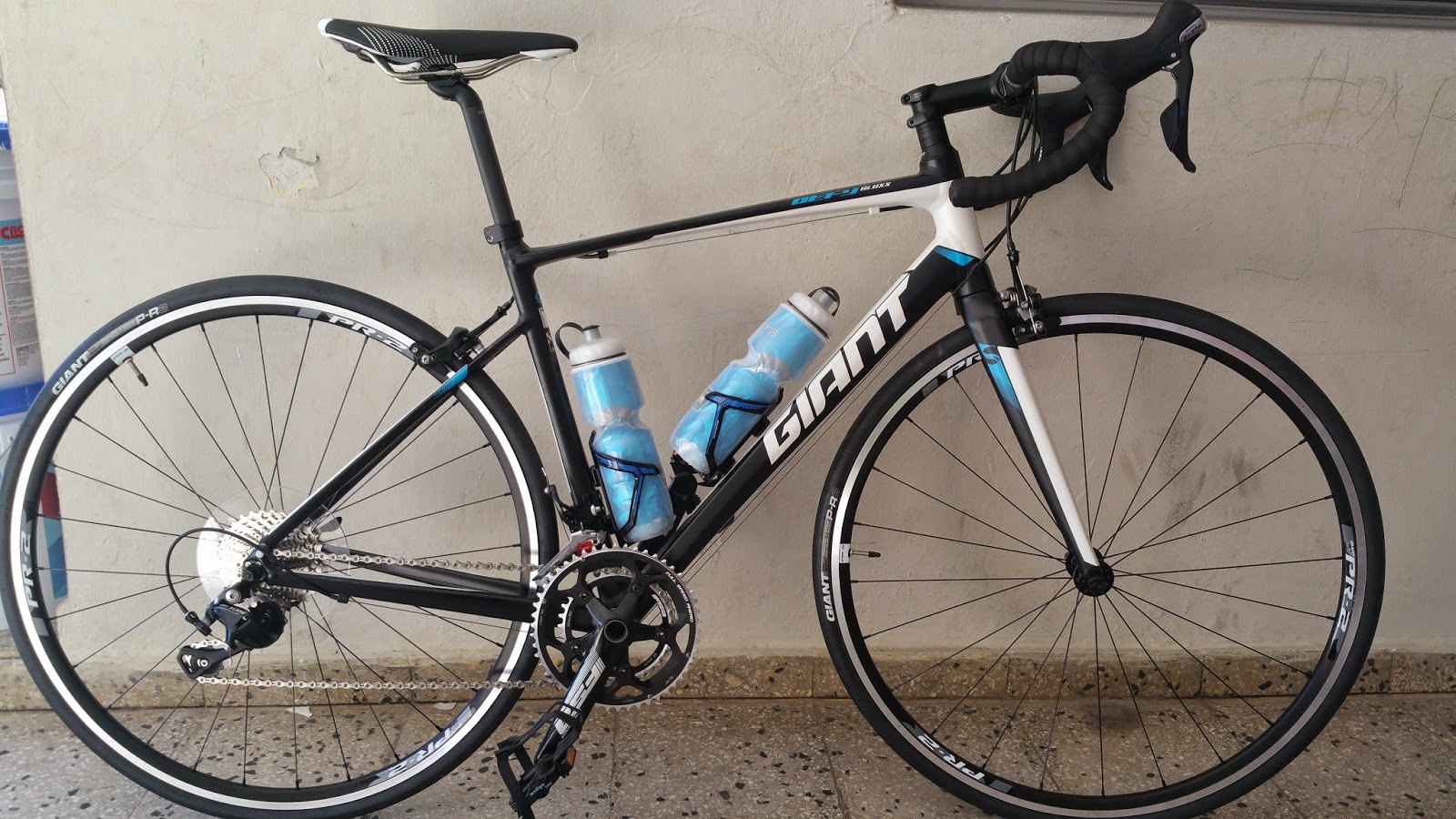 It's a Giant Defy 1 road bike. Right off the bat, let me say I love the name of the bike. Defy. Words to live by here in The Fat Runner. Here's a fun fact: Not being able to buy something right away gives you plenty of time to obsess about the details. And folks, I obsessed. 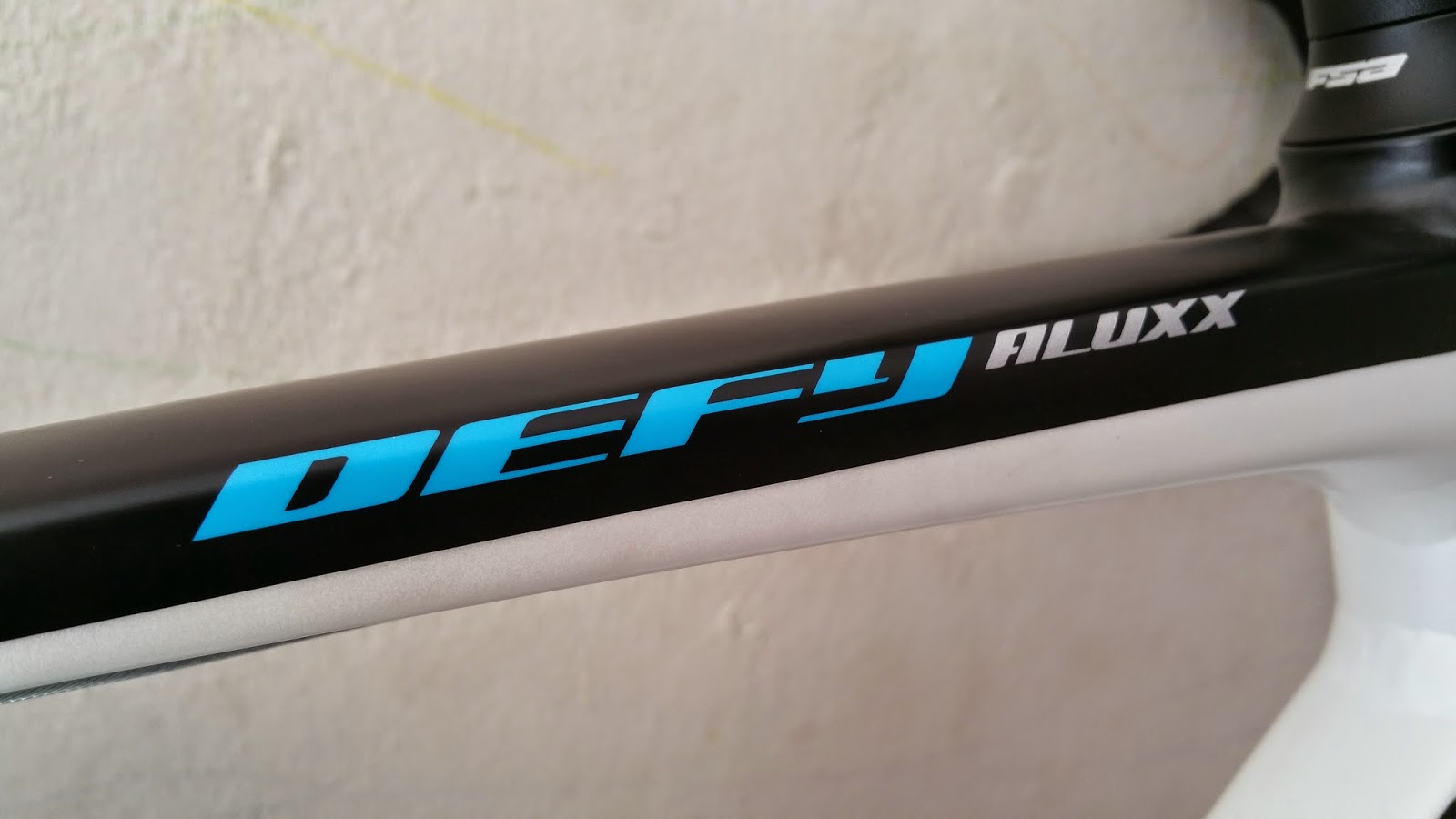 Bikes are expensive and at least in my case, not something you are gonna buy often. I wanted to make sure I was getting as much bang for my buck as possible. I wanted to still be in love with the bike 5 years from now and beyond. So I drew up a list of specifications of what I thought the bike needed to have in order for my conscience to be clean. What ensued was me diving off the deep end of the cycling world, consuming everything I could about bikes and how they are made and how they work. By the time I actually bought the bike, I knew more than many of the people in the bike shops about the models I looked at. 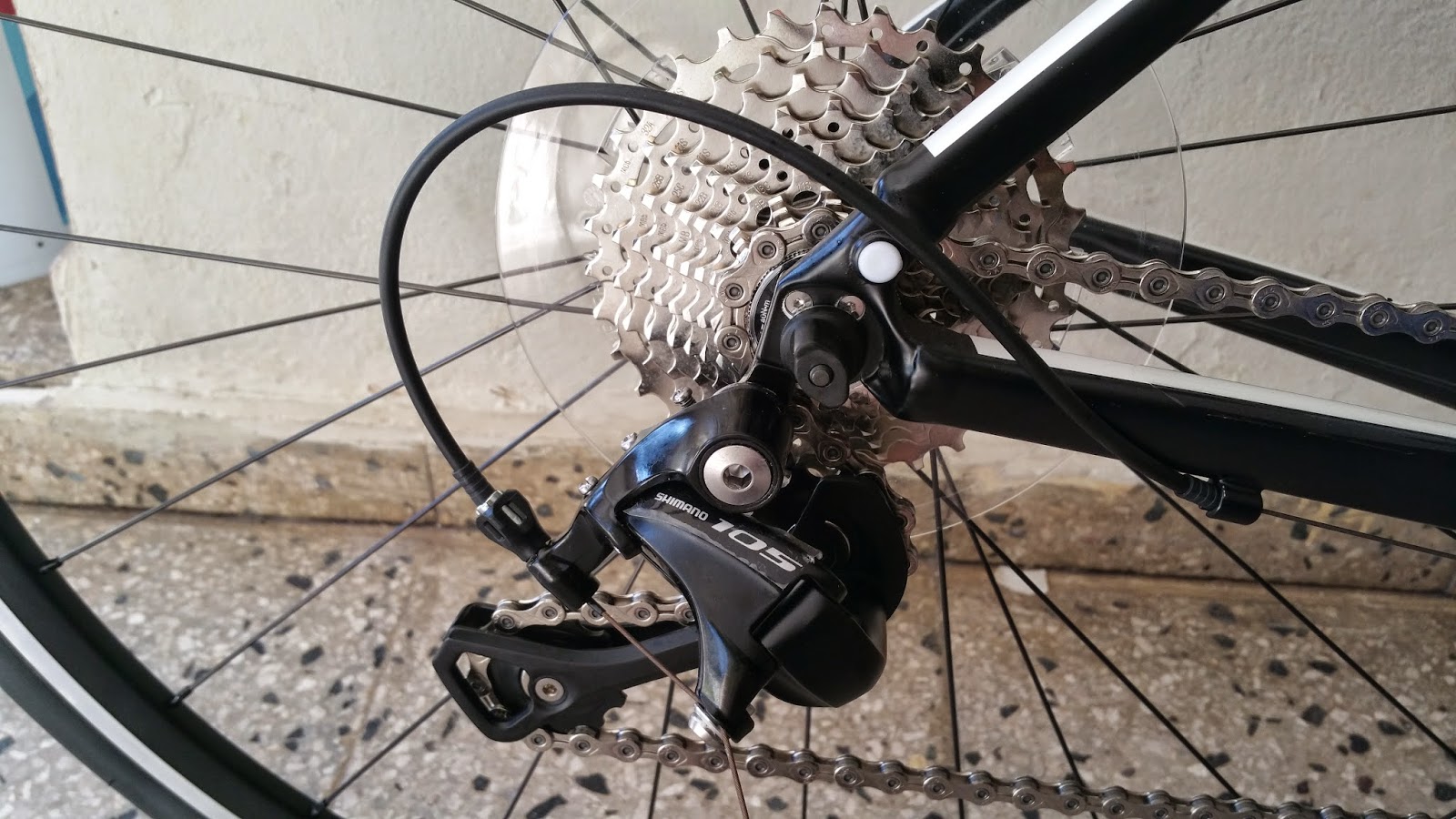 Essentially, this was my list of requirements. There might be stuff there some of you might not be familiar with but that's OK, I'll explain things as they come up during the year.

1. Aluminum frame - Carbon fiber is like, THE material of choice for modern bikes but they are way too expensive. Aluminum is light and sturdy. Important in my case where the weight of the rider is an issue.

2. Endurance geometry - Different bikes have different shapes depending on the needs of the rider. "Faster" bikes have a more aggressive shape that makes you sit lower and further forward. Endurance (or sportive or comfort bikes among other names) bikes are not as upright as hybrid or recreational bikes but not as aggressive as the racier models. I thought this was important. Since I have no previous experience, I did not want to buy a bike that was too aggressive to the point where I just could not hold the position comfortably and end up not riding.

3. Shimano 105 - The components or groupset are the stuff that make the bike work. Brakes, shifters, crank, etc... bike manufacturers usually install these in groups so that everything works together. I knew early on that I wanted at least a 10-speed bike and at the bottom of that you have Shimano Tiagra which is very good but if I could swing it, I wanted the groupset above that one, Shimano 105. The higher the groupset, the lighter, smoother and more durable it is. From the time I started checking bikes out, to the time I actually bought it, there was a model change and Shimano 105 went from 10-speed to 11 speed. Score!

4. Carbon fork - Aluminum has a reputation for being harsh on the road. Most manufacturers work around this problem by installing a carbon fork. It's the thingy that holds the front wheel. This helps damp the ride which helps a lot, especially in longer rides. The Machine comes with a carbon seat tube as well as the fork. Bonus! 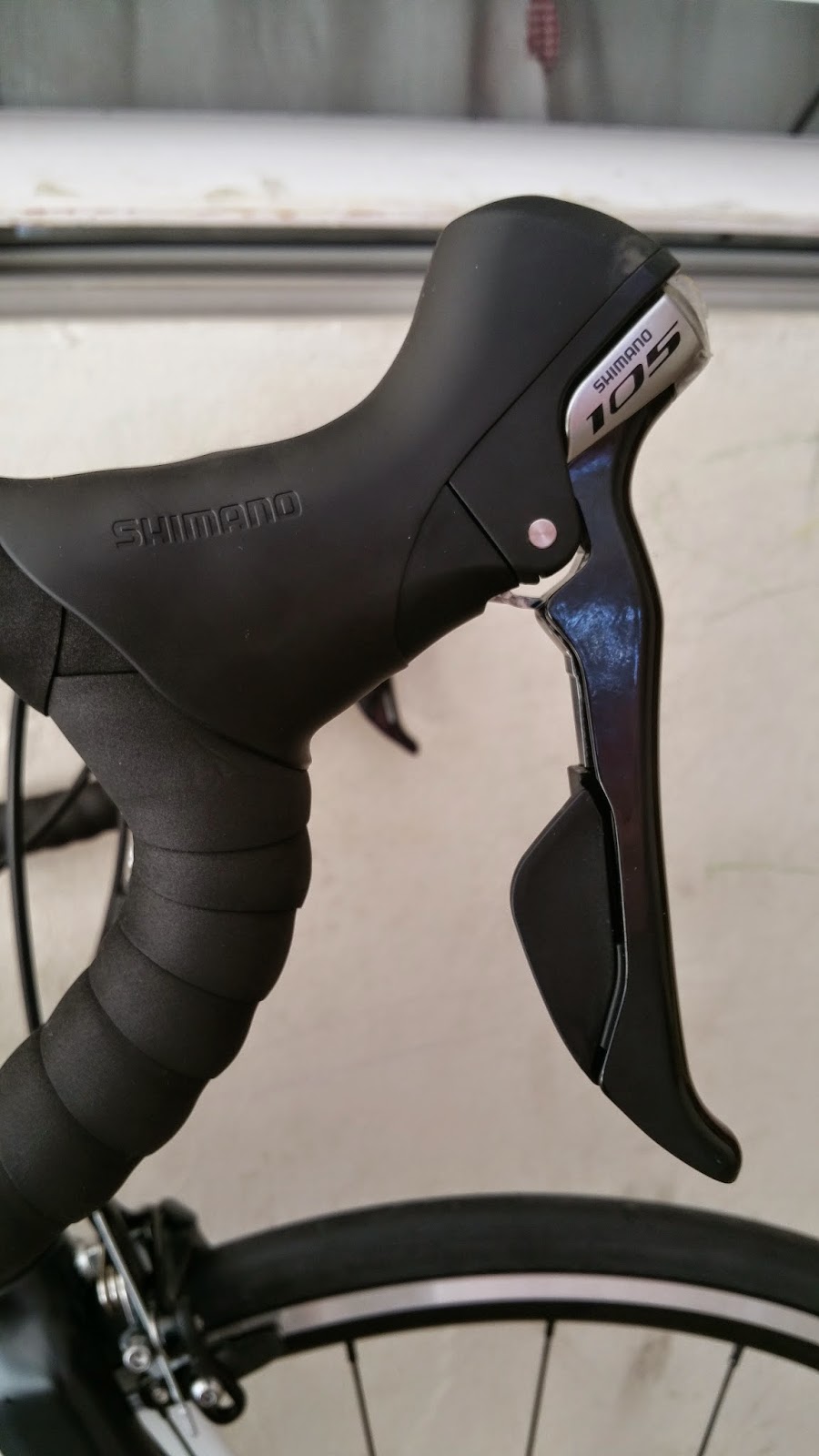 Right from the start, the Defy jumped at me. It really had everything I was looking for but it was at the very top of my budget limit so I tried very hard to find other options and try to save some bucks. I saw many bikes in the category and if you are shopping for one they are all pretty good. Bianchi Impulso, Scott Speedster, Cannondale Synapse, Trek Domane are some of the bikes you can check out.

But in the end, the Defy's reputation won me over. It's like the Honda Accord of bikes. It always seems to win it's category in magazine awards and it comes very well recommended so I decided to spend a bit more money and go for the "sure thing".

And so far I could not be happier. Road bikes look "weak". Even at this level, they are very light and streamlined compared to what you find at your local mega store so I was obviously concerned about it holding my weight. But I didn't need  to. Once on it, the bike feels sturdy and very stable. Riding this after riding my wife's mountain bike for a while last year, is akin to going from a Ford Pinto to driving a Ferrari Enzo. It's pretty amazing. I used to be afraid of shifting on any bike. The ensuing "rat-tat-tat... clank!" that came with it felt like the bike would brake at any moment but on this one, it just happens effortlessly. "Click." and that's it. 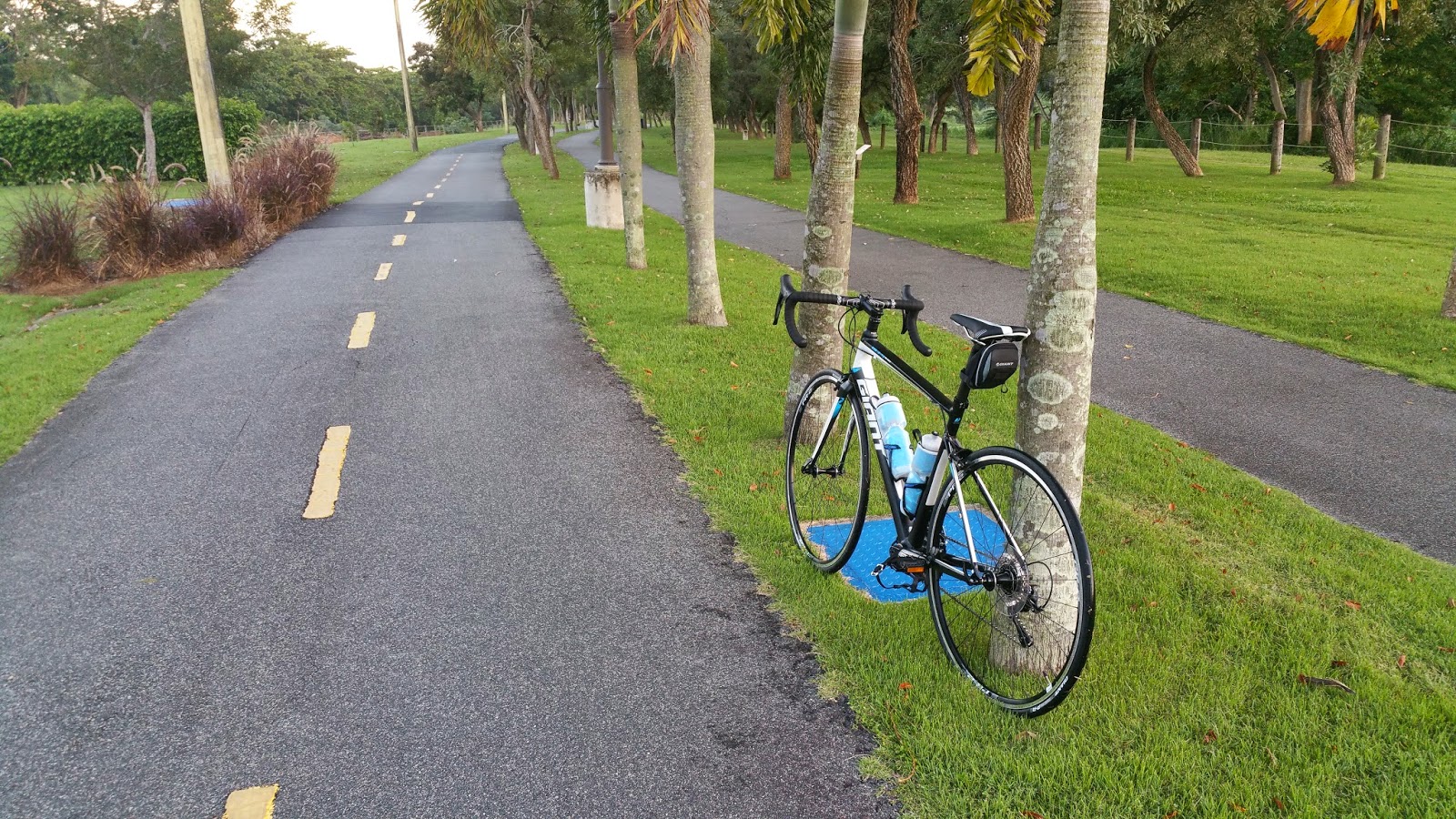 I will share more as I get more used to riding. You guys are in for a few laughs for sure as I talk about butt pain, cycling gear and many other things. Oh, and why did I name it The Machine? Well, in fitness in general and endurance sports -especially triathlon- in particular, people talk about "the engine", which amounts to your ability to propel yourself forward whether it's swimming, running or cycling. Well, if I'm "the engine" and engines power machines, then I'm the engine and the bike is The Machine. OK, it's a bit dorky but I can't help it.