I think it's safe to say that triathlon is not for the disorganized.

First of all, in case you guys were not aware of this, you don't train for all three parts of a tri at the same time. With the exception of certain workouts (known as "bricks") where you practice two sports at a time to get used to the feel of it, you train all three disciplines separately. While that might make some people sigh in relief that they don't have to swim, bike and run every day, the reality is that you have to figure out your week with a lot of precision if you want to get all your training in there. That means running at tight ship at home and an even tighter schedule.

The last two weeks have been the first with full-on running and cycling and hopefully this week I can introduce swimming to the equation. It has been pretty interesting and quite honestly a lot of fun so far. Yes, fun. While it's easy to get anxious about changes like that, everything has fallen into place kind of naturally. Of, course I'm working hard to not over-do it. The worse thing you can do is to try to do everything at once. Here are some new things I'm doing.

I love the smell of running in the morning...
In the past I have tried to avoid running early in the morning. With the exception of some long runs, all my running usually happens in the afternoon/at night. I try to protect my sleep time as much as I can plus, I admit, there have been some mornings where I have woken up and said "no way" and went back to sleep so I avoid early morning runs. But, you can only cram so much in a week and if you intend to swim, bike and run enough you need to make more efficient use of your time. To be able to swim in the afternoons/nights, I have to run in the mornings. Pretty much all training plans I have seen have two days per week where you both swim and run. As I get ready to start swimming, I have cleared Tuesday and Thursday afternoons to do it so I wake up at 5am to run. It hasn't been as bad as I thought. In fact after running in the morning and taking a shower I feel refreshed and ready to go. It's the waking up part that sucks. We'll see if that sticks.

The wonderful World of cycling
I'm enjoying cycling. I really am. It's a completely different feeling from running. So far I have been careful to acclimate properly by keeping the rides short. As I remain on the saddle for longer and longer, my nether regions complain accordingly but I think (hope) it's getting better. Apart from riding near my house I have been going to the linear park several times as I feel safer there (no traffic = good) and I went to "La Ruta del Ciclista" (The Cyclist's Route). It's a section of public road that the police closes on Sundays from 6:30am to 11:00am so that cyclists and runners have a "car-free zone". The road runs parallel to the beach so you get this breathtaking view while you ride. Awesome stuff. If you do the whole route and come back it's 10 miles. I was a bit nervous being my first time and being the new guy but not only did I find tons of people riding there but also people at all levels of fitness. I see myself going there regularly. I was surprised to ride the whole 10 miles in less than an hour. I'm cycling faster than I thought I would be. Believe me, I'm not complaining. There is one byproduct of cycling that I wasn't expecting but it's been great so far. Riding the day after a run really helps with my recovery it seems. It might sound weird, (how can you recover if you are working out) but I feel better the days I ride after a running day than on the days I don't ride. Interesting...

Isn't technology wonderful?
It has taken some tweaking but I'm getting my tech set up just the way I want. First, my Garmin Connect account. Garmin recently launched a new version of Garmin Connect that is very customizable. It allows you to get a pretty comprehensive glance at what you are doing. 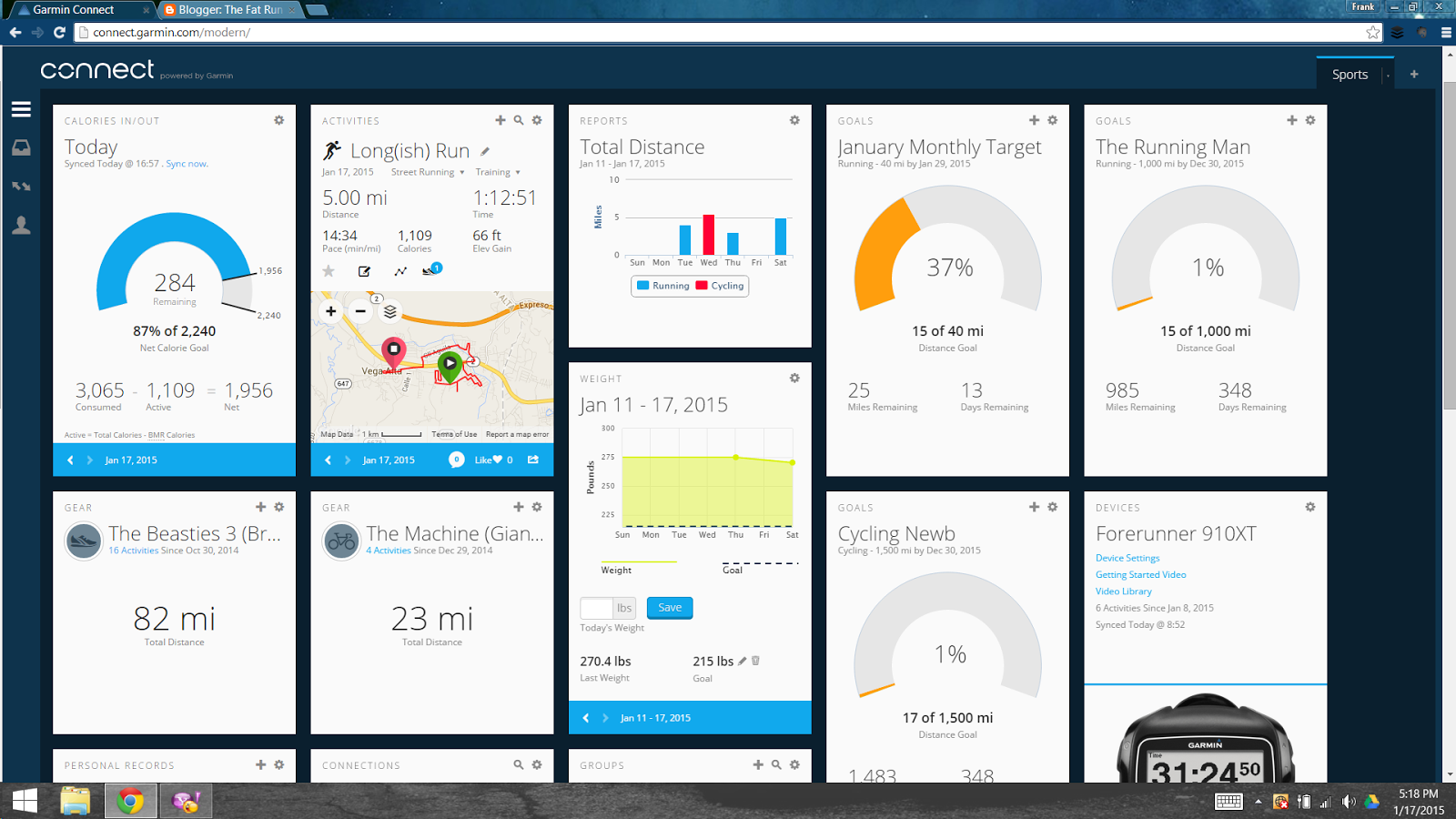 If you own a Garmin device, I invite you to take the time to set up this page to your liking. Move things around, add and take off things according to your needs. Once you do, it will make your life so much easier. I have also linked my Garmin account with MyFitnessPal. Doing so sends my calorie consumption from MyFitnessPal to Garmin Connect and in return Garmin sends my workouts and calories burned to MyFitnessPal. Isn't that awesome? Plus, Garmin sends my workouts directly to both Strava and Beginner Triathlete. In the past I have talked about how much I like Garmin Connect but find their social component a bit lacking. Since I was having trouble with Dailymile, and since Strava seems to be the weapon of choice for cyclists and triathletes I'm sending data there. Having my info on these two sites lets me connect with other people and motivate each other.

So look me up in those sites if you want to connect. At Garmin Connect I'm TheFatRunner, at Strava I'm Frank Pizarro and uziel5000 at Beginner Triathlete. You can find me at Dailymile under TheFatRunner21. I still have not given up trying to make it work so we'll see. You might still be able to catch me there.

So multi-sport training is under way! What I still haven't started is an actual, structured training plan. So far I'm just logging time in all three sports. As the year moves further along and I set an actual race (and race date) then I can dive into one of those.