Got home from work yesterday and my wife handed me a box with the new running stuff I had ordered. Yay! Isn't it great when you get new stuff from the mail?

Aside from my shoes, I had avoided buying anything running related until now. Running is a hobby (for lack of a better word) and like all hobbies, companies make all sorts of stuff just for it. It is very easy to go overboard! We have all seen them at races: The people who seem to have bought the entire running store. I certainly didn't want to be that guy, and especially didn't want to be the fat guy who bought the entire store.

But after six moths of running, I caved. For two reasons:

1. My wife. I was running in old cotton T-shirts and she complained about them smelling funny even after washing them. (maybe too much information here, but hey, it's a blog)

2. I found Jets stuff!!!!! I'm a big New York Jets fan and found some stuff made for working out with their logo and cold not resist. Here it is: 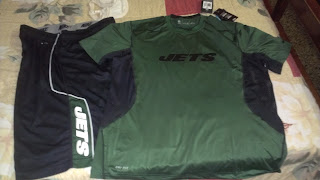 I also bought some running socks, which feel weird because they are so thick but they certainly help cushion your feet. Also, I bought another pair of shorts which don't have the Jets logo. They are black with a 10" inseam (as short as I can dare to go right now) and very light. Didn't take a pic of them because... well I was already wearing them when I took this one. Hopefully this will be the stuff I use for my first 5k at the end of the month.

Well, what better thing to do after getting new running stuff than go running? I put on the socks and the shirt and went for a 3 mile run. I'll let you know how I did when I post my weekly recap.