Let's begin with something totally unrelated to training. runDisney released pictures of the medals for the Avengers half Marathon weekend. Here they are: 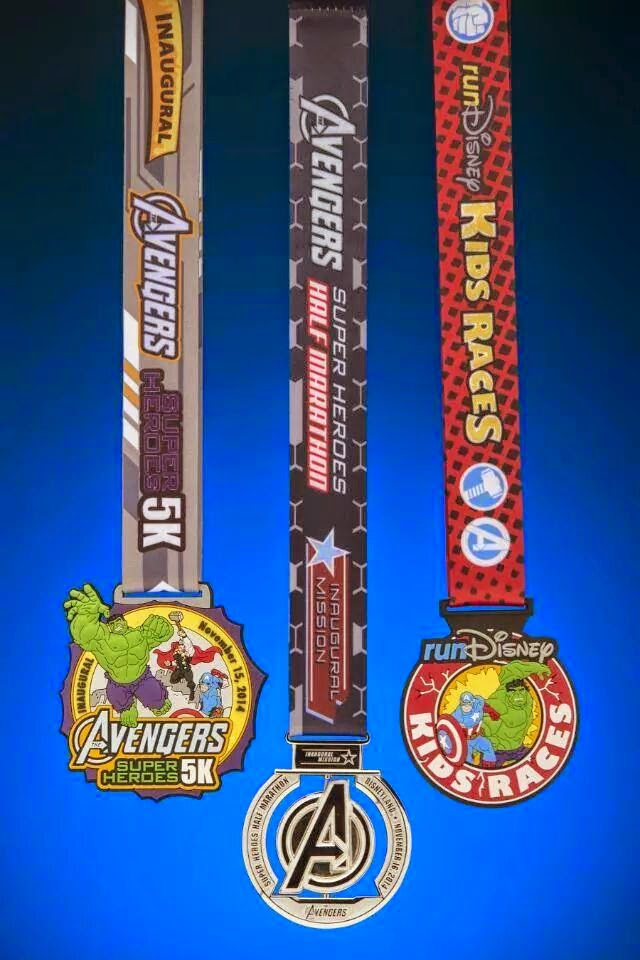 I've been following what people have said regarding the medals when Matt Marcela posted the picture to the Team Run Disney group on Facebook and apparently there are some mixed feelings. Personally, I love the Half medal. It is simple, elegant and to the point. Makes me even sadder that I'm gonna miss this one.

Anyway... training! Now that I'm deep into training for the Philly Half, it's time for an update. So far, it has been positive despite few snags. My mileage is up and I feel like I'm making good gains overall. Here are some of the good things and bad things that have happened so far. First the bad:

1. I have not been feeling well. I was sick a while back and for some reason I still have a cough and a head congestion that is giving me some pretty bad headaches. A few days ago, I was forced to cut a 5 mile run at 3 miles simply because the headache wouldn't let me go on. Sadly this is not new. Whenever I get the flu or whatever, the cough always lingers for the longest time. Totally sucks.

2. Apparently, I took it a bit too easy these past few months so it has been hard to get myself in "proper" running form. Long runs in particular have been challenging.

3. For the most part, I've been tracking my calories and behaving myself but there have definitely been some bad days...

4. It's been hard to keep a consistent schedule. Been forced to run on rest days and cut running days to make up for it however...

1. My mileage is definitely up. I don't like the unpredictable schedule but I'm running so that's good.

2. I'm back to doing speedwork and tempo runs. Hurts so good...

4. Soda consumption has been reigned in to an absolute minimum. Almost to zero. Almost.

I am having a bit of an issue in the nutrition department that I can't seem to figure out though. I usually run after I get home from work (5:30pm - 6:00pm-ish). On the days I run, I eat dinner afterwards. Since I'm watching my calories, my lunch is on the lighter side and apparently not enough to fuel my run properly. I have felt awful and tired during the run. Solution? Skip dinner and have a more robust lunch, then have a snack at night.

Skipping meals is a bit of a no-no when you are trying to lose weight but what other way is there around this? Has anyone had (or has) this problem?
Posted by Unknown at 10:45 AM