How (Not) to Train for a Triathlon - Cycling Edition

So, part 2 about my training for a triathlon. We take on cycling. Just reminder, here is part 1.

I suck at cycling
OK, I don't actually suck at cycling but I have to keep some continuity going here.Plus, if I were to name this part appropriately it have to be "My Butt Hurts" so I'm pretty sure many would prefer I stick with the current sub-header. Cycling has not been that bad, actually. There has been one small problem though:

I don't, in fact, technically, actually own a bike.

This has been quite the issue. I want to try my hand at cycling, not just for tri's but in general. A bit of research on the subject though has led to the self-evident truth that this sport is pretty darn expensive. A proper 10-speed road bike will set you back anywhere in the range of $850 to $1,800. Two grand if you want a carbon model (which a lot of bike shops tried to push on me). Then there's the pedals, shoes, helmet, gear, clothing... If you are looking to make a sensible investment to begin cycling, $2,000 seems to be the entry point. I don't have $2,000 burning in my pocket right now but I want to train. What is a guy to do?? 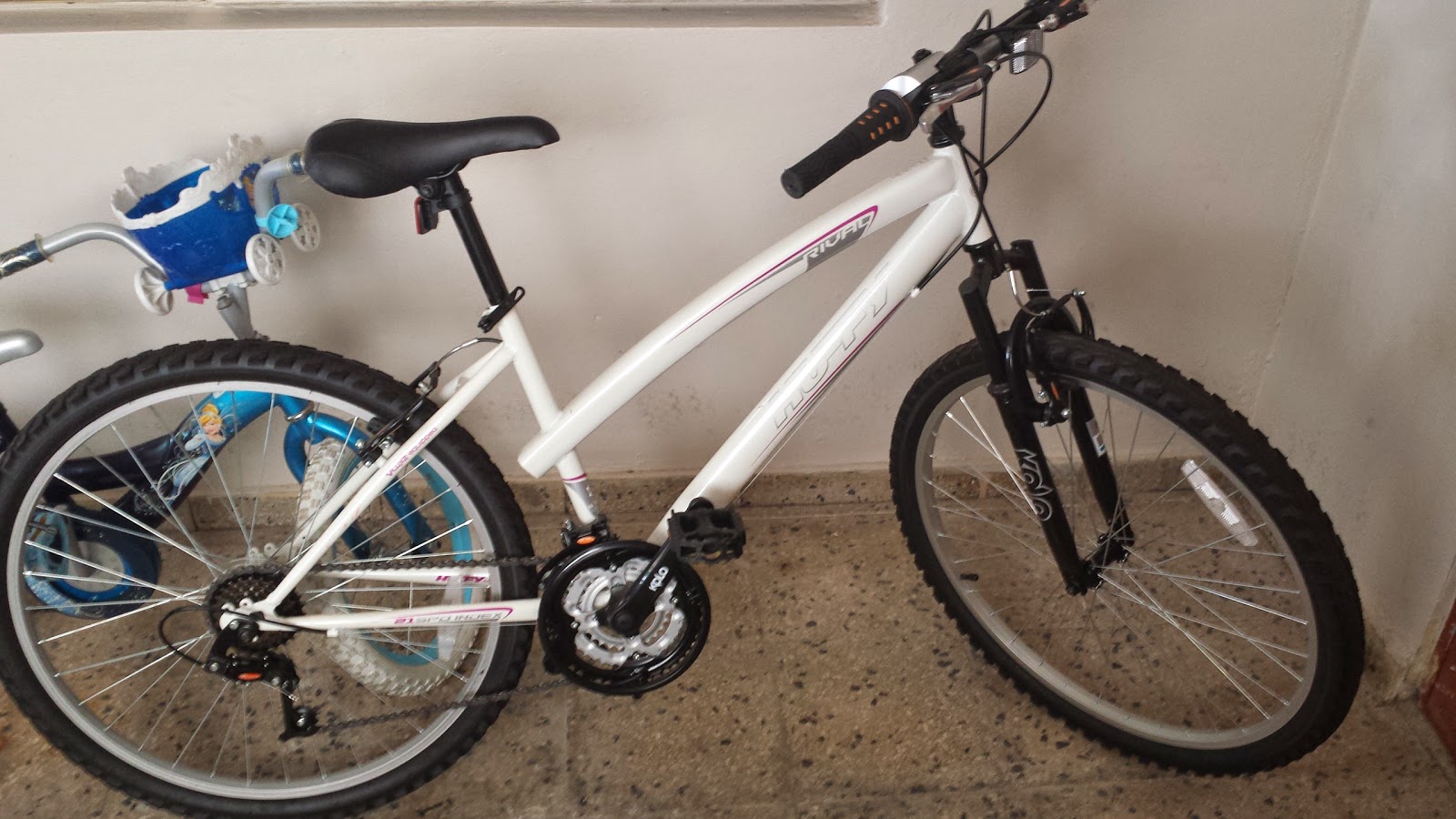 Yup, you use your wife's "Sears' Special" mountain bike which you recently got her for her birthday. She wanted it so she could ride around with the girls. Well, now it has become the World's silliest tri bike. Let's forget the fact that it's a mountain bike and that it's a girl's bike and white, pink and purple. Let's even forget that the entire neighborhood sees me riding this thing and finds it extremely amusing. We still have the problem that this bike simply was not designed for anything other than casual family rides (I don't think it would hold up in actual "mountain bike" conditions) which I painfully came to suspect and realize much sooner than later.

All silliness aside, I was kind of happy I was using it. It made me feel like I was paying my dues and earning my real bike. And you have to admit, I would have looked absolutely ridiculous racing in this thing which would have been funny indeed. But...

The first rides were a pain in the butt (huge pun intended here). I don't remember bike saddles hurting this much when I was a kid and I was one of "those" kids. You know, the ones who were on their bikes all the time. I went everywhere with it, ran errands with it... It was a BMX bike with a solid plastic saddle and yet my wife's bike has a padded saddle and I can't stand it. I think it has something to do with the fact that it's not my size and not properly fitted (big deal, bike fitment).  I bought some tri shorts (I'll discuss that fiasco later) and that has helped. Last week, I went out for a ride and just as I was thinking: "Hey, this saddle thing is getting better. I"m not feeling it as much." Bang! A pedal broke.

That's right. I broke my wife's bike. It didn't take that long either. Crap. Back to square one.

Now I gotta get it fixed which I haven't been able to so now I'm behind schedule in my training plan so I'm gonna need to rethink my June 29 window very carefully because I don't think it's gonna happen. Make no mistake. I'm gonna do a triathlon. But it seems I need to regroup and prepare myself better. At the very least, it seems I'm gonna need to get a bike before I can train regularly.

Having said all that, my foray into cycling has been pretty positive. This is one area where my running has paid huge dividends and even with a small sampling I can say I enjoy it (butt issues aside) and would like to try other things like Gran Fondos and century rides (100 mile rides) which are a big part of the sport and let's not forget the cardiovascular aspect. When I said triathlons can potentially make me a better runner, this is what I was talking about. Being able to cycle on non-running days will help me a huge deal I think. Your joints can only endure so much right?