Alliance 5K Race Recap (and a few other things)

Well, this was some week(s).

I was just telling you all about my running funk not too long ago which in and of itself was pretty bad, then my lack of running which was no picnic. It was tough but things like that being cyclical, I slowly started to see the end of the tunnel and get back on the groove.

Then, I got sick. Real sick.

A very bad cold, begat a very bad sinus flare up which begat an infection. The left side of my face swelled up like someone had kicked me. Still, somehow I managed to get in some runs but they weren't exactly inspirational. A day after some antibiotics (last Saturday), I was due a long run. 12 miles. I wasn't feeling up to it but this was the last long run before the Divas Half-Marathon so I had to make this work somehow. Settled for 10 miles, barely made it to that. It was horrible.

By this point I was feeling pretty low. The combination of my funk plus the illness have added up to a very bad moment at a very crucial time. If I can't run 10 miles, how can I possibly run 13.1? You all know where this train of thought goes and its not pretty. "Maybe I shouldn't race. Maybe a DNF is better than a DNS. And what about the full Marathon? If I can't run a Half..." After that long run in the early morning, I spent the entire day nursing sore legs and those wonderful positive thoughts. Then I remembered: I had a race on Sunday.

The Alliance 5K is a church charity event. In its 6th year it has been growing slowly, developing a reputation among serious runners. A good friend of  mine had been asking me to do this race for a while and I said yes. Little did I knew at the time that it would come at such a bad time. On Sunday, I was still a bit sore but my wife was very sick ( we are still debating who got who sick) and in bed. Great excuse to not go. Gotta watch the girls and stuff, you know. But the truth is I was torn. Maybe a nice race could help me get the bad stuff out of my head but I was still sick and very sore from the long run so a horrible failure in a 5K was not the best of ideas either so I didn't know what to do. Right around the time I had to leave, my wife got up and declared she was feeling better. Well, that for me was like some sort of authorization so I quickly got dressed and left. I still don't know why or what got me to finally decide to go but I did.

When I got there I almost regretted it. The start/finish line was right in front of the church and that church was in the very top a hill. A big hill. That meant going down hill to start and going uphill to finish. Crap. I look for my friend and let him know what an idiot he is for not telling me about this huge hill. His answer: "Frank, that's just the last hill. The whole course (see how course is curse with an extra o?) is pretty hilly. And there are two hills just like that." Wonderful. Then I noticed there basically two types of participants among the 200 or so: Very serious runners and a very small group of walkers. I was very suspicious that without those few walkers I could finish dead last in this race. It turns out the reason this race is popular with the racing crowd because of the challenging course.

I warm up and line up. I'm trying to clear my mind and put on some music. The gun goes off and we start running. First part is easy. We go downhill and I just let my legs go. Soon enough the hill ends and I get into a groove. Sure enough, the course is hilly and I feel like my pace is on the fast side. A mile in I overhear my watch beep: First mile 11:05. Whoa! Way fast but there was that downhill part at the beginning. It was still too fast though so I figured I would pay for it dearly later on. It was the first and last time I checked my watch. Slowed down a bit but then the first big hill came. 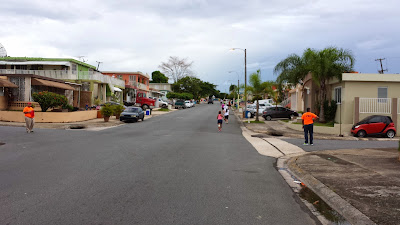 Pretty amazing how hills never look as threatening when you take pictures of them but trust me. It was big and it was long. I didn't expect to run all the way up but I did and at a pretty good pace too. After reaching the top I did an overall assessment and was surprised to find I was feeling pretty good. I kept going.

Want to know about my new pet peeve during a race? People doing the Galloway method and using me as their personal interval timer. Three different people I pass. They were running  but started walking. I pass them. They suddenly feel the urge to run, pass me then stop right in front of me. This of course means I have to make a sudden course correction to not run them over. I pass them again. Repeat. This gets old very quickly. Thankfully, I was feeling good and could run a bit faster. Eat my dust Gallowalkers!* Back to our regularly scheduled programming.

Somehow, I manage to run this entire race way above my normal pace but there was still that huge hill at the end. It turned out to be everything I thought it would be. Right in the middle of it I felt like stopping and I almost did but again, I kept going. Not only that, I accelerated a bit. Surely not the burst from the Popular Bank's 5K but a nice, strong kick at the end. I then got my medal and banana. Then, I checked my watch...


So after that slingshot at the start, I somehow manage to maintain hyper-speed (for me) through a full 5 kilometers. My slowest mile was the middle one and barely above 13 minutes. How I managed this on sore legs, sick and medicated, I have no idea. Oh yeah, on a hilly, challenging course too. How on Earth I didn't do this under "perfect" conditions on a flat course back in August during the Popular Bank's 5K... Well, I have no idea either. 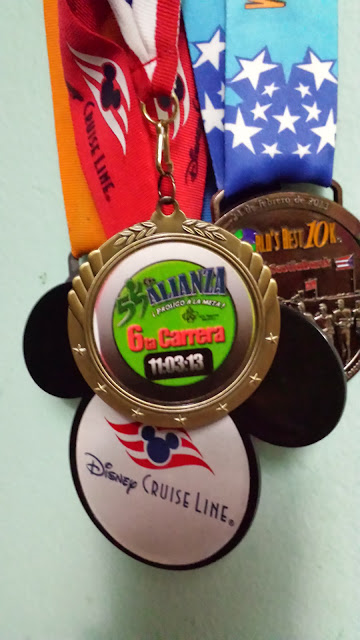 So, that was my week. How was yours?

*For the record, I have no problem with people doing the Galloway method. In fact I think it's the safest, sanest way of running long distances. I'm just annoyed by people doing the Galloway method feeling insecure about being  passed by a fat, slow runner. Pass me all you want just don't stop right in front of me. Sorry, I'm venting and watching House re-runs as I write this.