"I love the smell of Estrogen in the morning, while wearing a pink tutu."

Yes, I did wear a pink tutu. For those who don't know what I'm talking about, back when I announced I would run this particular race, it generated an overwhelming amount of humorous comments on this blog and other social media which I took in stride because quite frankly, I too thought it was funny that this race would end up being my first Half-Marathon. Among the many comments were also suggestions which added up to saying "Hey, you are running this race, you might as well embrace it's spirit." Something I could totally support so... 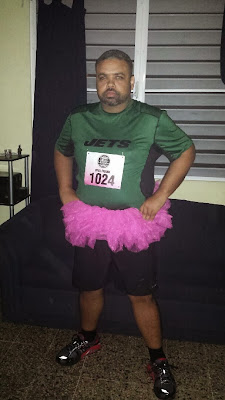 That is the face of a man tired from waking up at 3:30 am while being scared to death and nervous at the same time... with a pink tutu no less. And as far as the tutu goes, I actually seemed to have picked the perfect one. It did not bother me one bit during the race and fit me perfectly despite the fact that it's "one size fits all", which is a small personal victory right there. The only issue and it was a small one, was that when I walked and my arms were down, they would rub the tutu which was a bit annoying but not painful.

My goals for this race were pretty clear. Finishing the race goes without saying and with a 4 hour time limit, it was definitely achievable but, I had bigger goals in mind. This race was a means to an end which is the Walt Disney World Marathon in January, and that race has a tighter limit. For me to at least feel I was on the right track, I had to finish this race in 3 and a half hours or less. A tall order considering my recent woes but something to strive for.  My race strategy however, was not as clear. I was feeling under-trained, and with my recent long runs I was not feeling so sure of myself so I kept going over how to tackle this race.

Anyway, after getting dressed and eating some toast with peanut butter, a coffee and half a Powerade I headed to San Juan to run my race. There was free parking for runners and also bag check which is awesome; especially when you are by yourself with no one to hold your stuff. On my way to the starting area, I was offered a running cap from some nice ladies working for the Ford Motor Company, which I declined. Then I was offered another one by another nice lady and decided to take it. This, turned out to be an awesome decision later on. I immediately noticed it was pretty warm for 5:30 am. A bad omen of things to come.  Once on the starting area, the tutu caused quite a bit of reactions. Some runners would point to me and tell their boyfriends/husbands "see, he wore one." I got a lot smiles and thumbs ups and "nice tutu" comments to which I would answer "Hey if you can't beat them, join them." And, there were those who thought I was gay which was fine by me as long as my wife didn't think so.

The 6:00 am start time came all too quickly and after the National Anthems we were off. It was heading towards the starting line that I noticed I had not put on my heart rate monitor. The strap I had put on at home but I waited to put on the actual monitor at the race. So that was my wonderful start: fumbling around with my headphones and the heart rate monitor while pressing the button in my watch so it can begin timing me. I tried not to let it get to me, worked it out and focused on the task at hand.

The course for this race was, to put it mildly, intimidating. There were several hills that I knew were going to be a problem over the long term. Bonking was a serious concern so I did two things: I had an aggressive fueling strategy: Every other water stop which amounted to 4 gels. And, I decided beforehand I would walk up the hills which started pretty early as the first big hill was early on. On the plus side, the first half of this course was very beautiful and scenic. 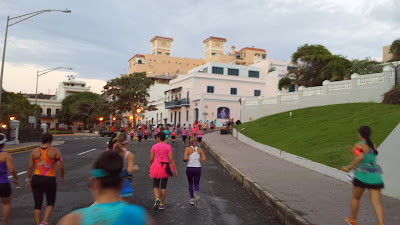 The corner right before the first big hill. 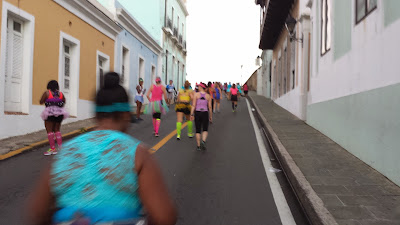 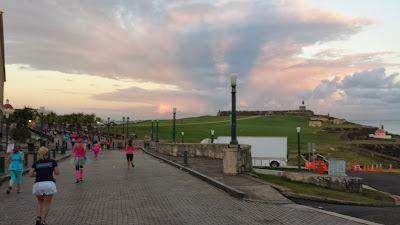 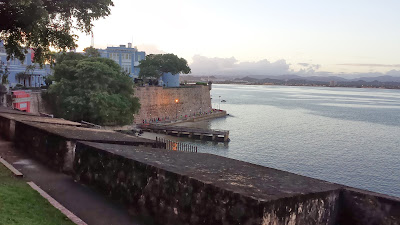 Can you see the runners at the base of the wall? 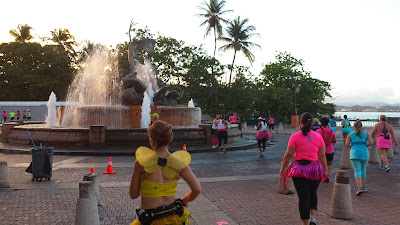 Check out all the tutus!

I made it a goal to not look at Mr. Garmin so I tried go by feel and work up a manageable pace. Either all the scenery was inspiring me or my strategy was working because I was feeling pretty good. Soon after I took that last picture, it started to rain. As in, it started to rain with the Sun up and shining at the same time. It's an old saying that when that happens, witches are getting married. I don't know if that's true but apparently it also means divas are running too. A bit after that, we ran by a church where a priest was blessing all runners who stopped by. Spectators got a real kick out of that as well as the runners. And after that, nothing. We left the part known as Old San Juan and ran towards the financial district,  and on the way there the is a bunch of nothing so... boring.

It was around that time I got to the halfway point, and I took a bathroom break and for the first time, checked in with trusty Mr. Garmin. In my paranoia, I had set up my watch's handy virtual partner feature to 16 minutes per mile.(My personal time limit) What I saw, honestly blew my mind.

I was ahead of my target pace by half a mile.

I was too happy to even think of why I was so far ahead so I just kept going. A couple of miles later I made to the financial district and here is where the Sun switched from early morning warmth to full-on, scorching, Caribbean beach hell-type of Sun. Man, it was hot! Yet, I managed thanks to the handy cap I was given at the starting line. I never take stuff at these things because I hate to carry things around yet I took the cap. First time ever I have run with one. Call it divine intervention.

Maybe it was that heat but shortly after reaching the financial district and heading back to Old San Juan I started to fade. Fast. Also, the longest hill of the course was up, which I walked, of course. Right after reaching the top, I started to run but couldn't for too long. Oh no. This is not good. I tried to get into a rhythm but was struggling. Then came this long downhill section which I tried to use as a sort of jump-start and while I sped down pretty quickly I was walking as soon as the hill was over.

This was the final stretch. Less than a 5K to go. I was heading to another water station where I was supposed to take my final gel. I felt like I was going to throw up if I took it, but I did, along with a lot of water and some Gatorade. Then I turned the corner to Ashford Avenue. This avenue is in a part of San Juan called El Condado which is where all the hotels, fancy restaurants and night clubs are. You know what there is not a lot of there? Freaking tall trees! With shade! The Sun was scorching and I was tired and fading by the second. I felt I couldn't run anymore. So, I went to my last resort. I looked in my phone for an app I downloaded to count run/walk intervals. It was set to 1 minute run/1 minute walk. It was all I could do but barely. A couple of intervals later I couldn't do the 1 minute run the whole way. But I kept going. The last mile I thought I was going to die but I kept it together and when I saw the finish line I did one final push and ran all the way to the end.

Oh, and with a pink tutu.

What happened next was a bit hazy. I was obviously exhausted and a little disoriented. I was given my medal by some very chiseled model-guy with no shirt on. Then I was given a water bottle, a rose and then a shot of champagne. There was an area to have your picture taken but there was a line and it had no shade! Who the heck thought this through?! There were many people celebrating and a lot going on but all I could think of was getting out of the Sun. Alas, it was not to be. The bag check tent was what seemed to me like a thousand miles away. After getting my bag, I looked around for some shade and when I couldn't find any I gave up and left. The walk to my car was painful. Very painful. But after taking off the tutu and turning on the AC, I sat down to savor what I had done. 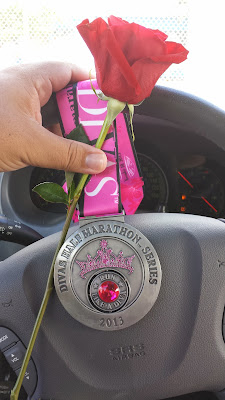 The Rose, I gave to my beautiful wife once I got home. The medal, in all its pink glory, is already hanging on the wall. 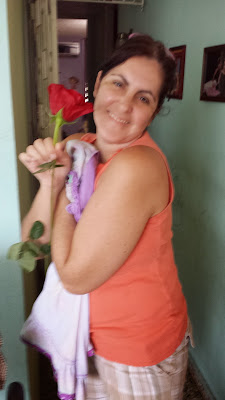 A little blurry but hey, I could hardly see straight. 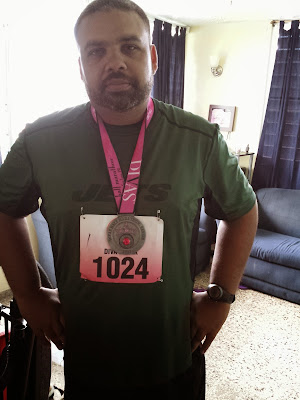 Someone get me a bed. Stat!

I have spent the last two days trying to figure out how to describe what I was feeling after I finished. Then, I realized I have felt exactly the same way once before, during my first race ever:  Popular Bank's 5K . I was frustrated because I didn't run the race I wanted to run but instead of complaining about it, I was trying to figure out how to do better the next time. And that is what's occupying my mind now. I know I can run better than that. I have a very distinct feeling that I can run this distance a lot better and faster than I just did. I just have to work hard at it.

I could also be moping about how much I struggled in the end and how that bodes for me when I run the marathon but after getting home from the race and downloading the data from Mr. Garmin I could see exactly what went wrong.

As if I haven't learned my lesson by now, I started too fast. Then, after starting too fast, I kept going too fast. To run this race evenly, I had to run the whole thing in the high 15's (which I thought I was doing) yet at the beginning, I'm doing 14's and 13's. A 13:09 3rd mile?! Who do I think I am? Usain Bolt? Even after that (relative) bullet train start, I managed to stay in the 15's until mile 9 after which everything unraveled. I should have checked Mr. Garmin earlier. Even if I would've figured it out during the bathroom break that I was going too fast, it wouldn't have mattered. It was already too late.

The good news? Even after bonking, stopping to pee and taking all those pics, I still managed to finish in under 3:30, and after the initial shock (and scorching Sun), with a total desire to do it again, only better. Not bad.

Now I understand why so many people say this is their favorite distance to run. I hear it all the time: "It's long enough to be challenging but still doable." I don't think I really understood that until now. It's not that it is easy to do. Far from it. But doing it, you realize that with proper training and hard work it can be done.