Make sure you catch part 1 of this story and our daring escape from Puerto Rico here.

Where were we? Right, after an uneventful flight we made it to Orlando International Airport, got on Disney's Magical Express and headed for our Hotel, Pop Century Resort. Before I delve into our Disney adventures, I thought fellow runners might benefit from a description of this resort so here we go. 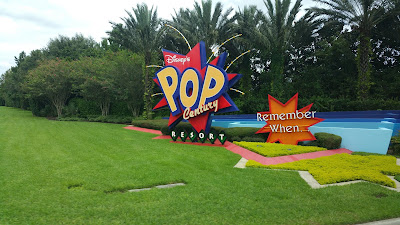 Pop, (as I will refer to it from now on) is a value resort along with the All-Star Resorts (Music, Movies and Sports) and Art of Animation. Being a value resort, there is not much in terms of amenities here and the accommodations are equivalent to say, a Holiday Inn but that is not necessarily a bad thing. When your itinerary has you all day at the parks or other places, what do you really need out of your hotel other than a place to collapse after a long day? If your time in Orlando includes some leisure moments and time away from the parks to do some other stuff, then the moderate or even the deluxe resorts make more sense but this was not our case. That extra money could be better spent elsewhere. 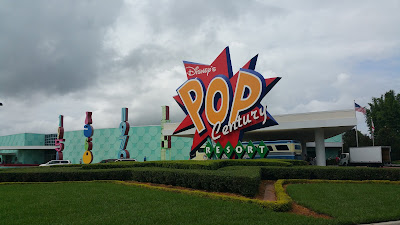 However, just because the accommodations are spartan, it doesn't mean that Disney has cut corners here. The hotel is beautifully themed. A homage to the latter half of the 20th century, the resort makes reference to the 50's, 60's, 70's, 80's and 90's. With much of the current adult population having grown up somewhere along those decades, this is a trip down memory lane for most of us. One of the main focal points of the resort are the gigantic icons that anchor the buildings. For example we were staying in the 80's buildings so we were greeted every morning by a giant Roger Rabbit and a huge Sony Walkman. The ends of the buildings were flanked by huge Rubik's Cubes. (In the 70's buildings it was 8-track tapes, in the 50's it was bowling pins and so forth) 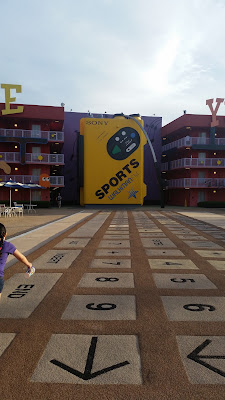 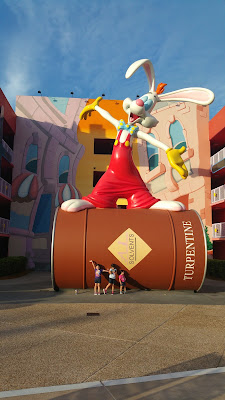 Unlike the All-Star Resorts, Pop is very walkable. The 80's section was the very last set of buildings of the resort and I found the walk to the main area to be fairly decent. I'm not saying it's close but compared to the same walk at say, All Star Sports, it is definitely shorter, therefore making the need for a preferred room (one closer to the main building) less of an issue. Of course, after an entire fun-filled day at the parks or after running a marathon, any walk to your room will seem endless. Especially if it's raining. (And it was on the last day.)
The main building is an exercise in efficiency. Your required check-in counter -which is quickly becoming obsolete with online check-in-  is joined by Everything Pop, which is a gift shop/food court hybrid designed to handle large crowds quickly. The gift shop exit leads to the park buses so every time you arrive from a park you are treated to all the stuff you forgot to pick up while you were there. The food court is a large area with different stations and great variety. I particularly enjoyed to the Omelet station, where you get to pick your fixings and are made-to-order. My girls all enjoyed the Pop Waffles. Just like the Mickey Waffles but with the Pop Century logo. As far as lunch and dinner we only tried the pizza which I felt was pretty good considering the source. All other meals were done at the parks. At the end of the food court are the beverage stations where you can fill your resort mug with anything from tea and coffee to all kinds of Coke products. 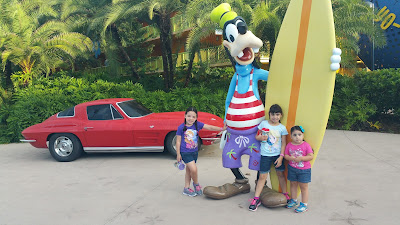 While we made this trip on the tail end of the summer season and the parks were relatively peaceful, Pop Century was playing host resort to a Masters Basketball Tournament being held in ESPN Wide World of Sports so it was full of old basketball players from all over the World. Despite this, we never failed to find a seat for breakfast or found the lines at the food court to be long. Again, everything was very efficient and all the Cast Members we came in contact with were very friendly and never seemed to be in a hurry to get rid of us, which you would expect at this level and with this amount of people.
As an added bonus, if you are using Disney transportation Pop Century does not share buses with any other resort, unlike the All Star Resorts in which you have to endure multiple stops if you are staying in either Music or Movies. 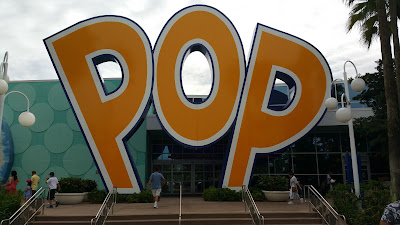 All in all, Pop Century is a solid choice for anyone looking for a "no frills" option on site. It covers the basics and then some. If you simply need a place to crash after a long day in the parks and still have access to both the Dining Plan and Disney Transportation you can't go wrong with Pop Century. In fact, if you are looking for a Value Resort for Marathon Weekend, this along with All Star Sports would be my top picks.

Tomorrow, our very busy day at the Magic Kingdom.
Posted by Unknown at 9:01 PM