Here's parts I and II of this trip just in case you want to catch up.

Here's another interesting tidbit from our trip (read the previous post for the first): I've been to Orlando to visit the parks countless times. Of all those times I have been here as "the head of the family" with my daughters three times. Three times and we have visited the same two parks every time. Magic Kingdom and Hollywood Studios. There's a demographics lesson for you. Know your audience folks. Princesses and Disney Junior is where it's at. Hopefully, I'll be able to remedy the fact that my daughters have yet to visit Epcot and Animal Kingdom at some point in the future but for now, we came here for the Frozen Summer of Fun so here we are! 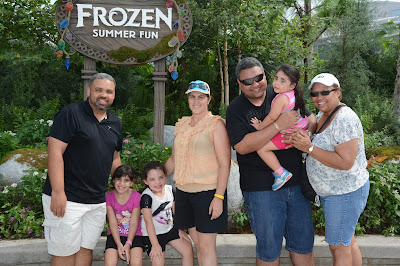 The day started... late. Everyone was pretty tired the night before and I told Mayline to allow the girls to sleep as much as possible so they could rest. These girls... at 5:30am they are usually up and about whether tired or not so I figured that with their level of exhaustion they would sleep all the way to maybe 7:30am but they went past that. Probably for the first time in their lives. After a record-breaking dressing and combing session we swallowed some breakfast and headed for DHS.

We literally walked through the gate to catch the start of the Frozen Royal Welcome parade. The main objective of this day was simple: Catch all the Frozen-related activities happening in the park. So, while late, we were off to a good start. Disney, being well... Disney, made sure to create the proper ambiance for the parade by making it snow along the parade route. You don't see that everyday. Especially during a hot, Florida, summer day. 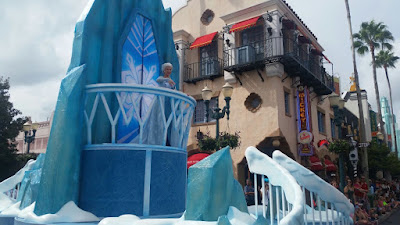 So that got the girls amped up and after hearing Let It Go for the first time of many this day we headed over to the Animation Courtyard for some character time with some of the girl's big favorites. 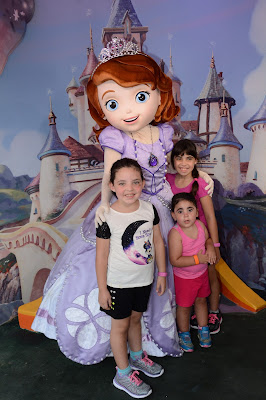 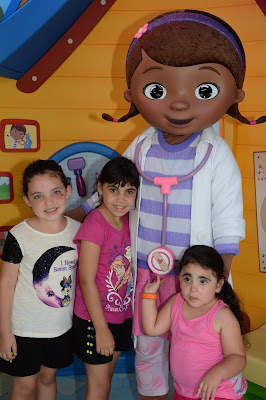 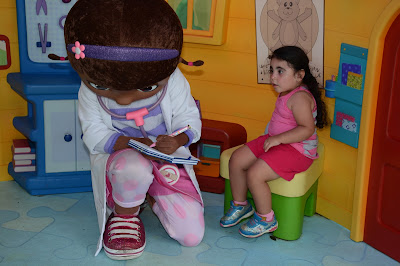 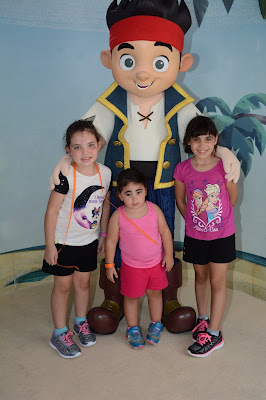 This part of the day was Angelica's show by the way. "The Kraken" ran all over the Animation Courtyard leading the way to the characters she wanted pics with, which were all of them. At one point, we saw the line for Doc McStuffins to be shorter than the one for Sophia the First  so we switched. She went ballistic. I would've never guessed that this would be her reaction to the characters. Worst case scenario: she would be afraid. Best case? She would "tolerate" getting her pic taken with them. She ended up the bravest of the three. That's kids for you.

Next off was Olaf's Summer Cooldown over at the Main Stage. Here I made my best Queen Elsa impression.

So Elsa can conjure snow flakes. So what? I can conjure cast members... apparently. Olaf's Summer Cooldown is essentially a dance-along and it was pretty fun. We did the Twist, threw around some beach balls and of course endured a rendition of Olaf's Ode to Summer. The streaming jets of cold mist at the end were extremely welcome. It was a pretty hot and humid day. 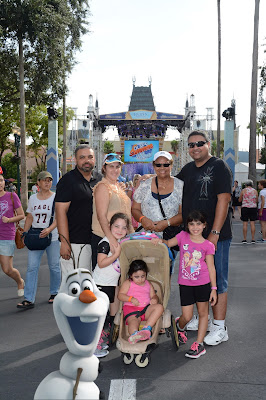 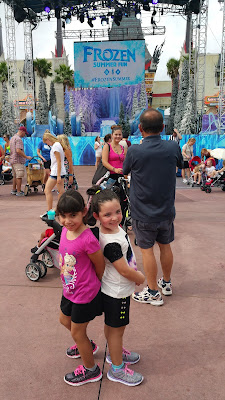 I was a bit disappointed by Disney Jr. Live on Stage. Whether because of changes or technical issues, some of the effects on the show were missing and I think it took away from the experience. That didn't stop the girls from enjoying it of course but my gut feeling is that next time we come here, we'll be skipping this one unless they update it with something like Miles from Tomorrowland which is big at my house. Kids grow up. It happens. 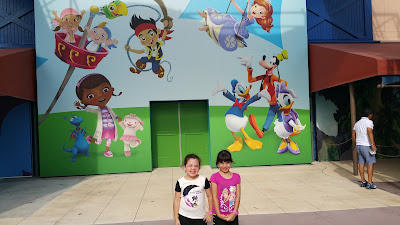 Lunch was at Pizza Planet. I was warned that this place looks nothing like it does in the Toy Story films but the girls insisted and I obliged. I tried the Meat Lover's pizza. Nothing to write home about but you know, it's pizza. Can it ever be bad?

This is the "main attraction" if you will, to the whole Frozen Summer of Fun. It is done in the stage where American Idol used to be. Here's the short version: Princess Anna summons Arandelle's official historians to tell the extremely truncated version of the events in the film. Think of the film, take out everything except the songs and you're there. Of course everyone is encouraged to sing along. Do I have to tell you that my girls enjoyed this attraction? Anna and Elsa can pop up a million times and it will never get old for them. Plus, they got to sing their tiny lungs out. My favorite part? When one of the historians mistook Kristoff for Justin Beiber.

Then came the highlight of the day for me. My friend and coach extraordinaire Katrina Pilkington and her husband Gary drove from Tampa (she'll soon be moving to Las Vegas) to meet us at the park. It was absolutely amazing to finally meet someone who has inspired and motivated me so much in person. As much as I loved meeting you Kat, hopefully you'll get to see less of me next time we meet. Wink wink. By the way, Mayline thought you were taller. That's what happens when you have a bigger than life personality.

Fast Passes for Toy Story Mania were waiting for us and we knew from previous experience this was a favorite for the girls. The best part here was when they all decided they had beaten my score by combining everyone else's so I guess I was the loser. 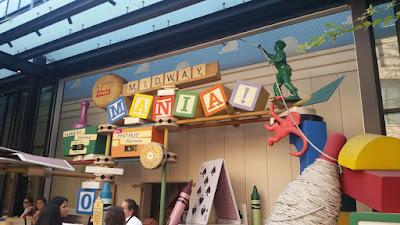 Which brings me to another attraction I was sad to see not working properly. Voyage of The Little Mermaid was missing all of the water effects. Again, maybe it was just broken but this and Disney Jr. Live on Stage were reminders that DHS is a park in a state of transition. There are big things coming here and the Frozen stuff is basically masking all that has been closed. Hollywood Studios has always been one of my favorite parks and I can't wait to see it 100% functional again.

We also ran into Minnie Mouse all dressed up for beach summer fun and dancing the afternoon away! Veronica and Maria did not want to dance with her for some reason but guess who was total game for this? Oh yeah. Time to "release The Kraken!"


This brings us to the low point of the day which I know sounds bad. It wasn't too bad I guess but sometimes, especially with kids, the only way to know you're gonna get burned is to put your finger in the fire.
The two older girls wanted to ride The Twilight Zone Tower of Terror. I was hesitant but they insisted. I explained what the ride was and how it worked. As we walked up to it I pointed at the fact that people were screaming inside the building. They bravely kept walking. A part of me thought: "well, they loved the Mine Train and they went crazy for Star Tours so maybe this was not gonna be so bad." Well, that part of me was wrong. As soon as the ride was over, Maria was trembling in terror (how fitting) and Veronica was outright crying. It took a lot of soothing to calm them down. Yeah, they're not gonna be riding this one anytime soon. To this day, The Tower of Terror is a touchy subject around our house, so don't bring it up. Me? Some of you may know that Tower of Terror is programmed to act differently every time and this particular turn was my favorite ever. It was the first time I felt truly weightless while riding it. Which is probably what scared the girls more than anything. 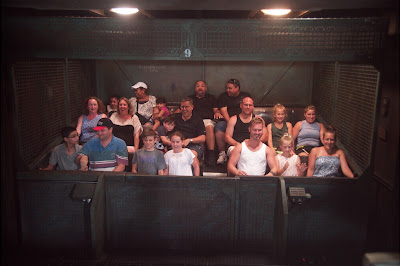 We are in the last row. The very last girl on the left, screaming and crying and laughing nervously is Veronica, then my Mom looking amused at her reaction followed by Maria, holding on for dear life. Quite the scene.

Fearing some permanent damage, we quickly went back to Star Tours for some badly needed happy memories. Did I mention how happy it makes me that they love this ride so much? 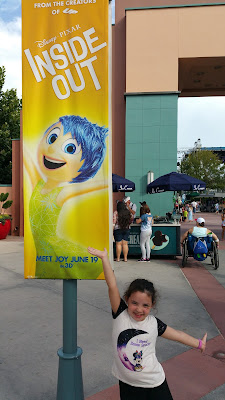 After that we had dinner at ABC Commissary where everyone had Cheeseburgers except me, who was feeling adventurous and tried the steak. It needed a bit of salt but otherwise it was pretty good. ABC Commissary actually has a pretty decent and varied menu. I have tried different dishes here over the years and have always been happy. Definitely recommend this one if you are looking for Quick Service option in DHS. Quick side note: For the sake of order and peace, I sat everyone down and went to order by myself. The order was too big for me to handle and just when I resigned myself to doing two trips, the Cast
Member who gave me the food happily offered to help me carry the trays to our table even though it was not his job. This is a Quick Service restaurant after all but that's Cast Members for you. 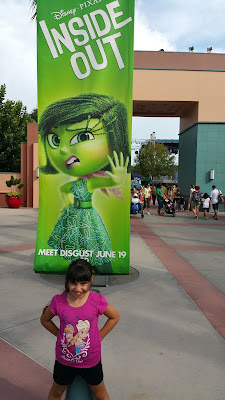 It was during dinner that it started to rain. Really hard. Thunder, lightning... it was pretty bad. it was at this time that I started fearing that we were gonna miss Fantasmic! and the Frozen Fireworks Show. Or rather, that it was not gonna happen at all. And basically, that's how our day ended. After a couple of hours of waiting it became evident that the rain and lightning was not gonna let up and my brother reluctantly went out in the rain and bought some ponchos, which did almost nothing because it was raining so hard and we ran to the buses and eventually our room. 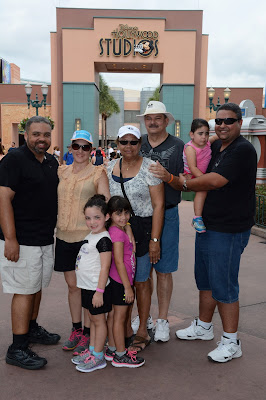 And so it was over. We almost got to do everything we set out to do. We missed Fantasmic! and the Frozen Fireworks although it was not our fault and we didn't get to see Frozen Fever which was no biggie as we had seen it when we saw Cinderella at the Theater. Everything else we had set out to do in this Kamikaze trip to Disney World, we accomplished. Oh yeah, I would have loved to catch Indiana Jones Epic Stunt Spectacular one more time since it's scheduled to close but that was a personal thing so it was never part of the official schedule. No joke, it took me about a week and a half to get rid of the felling of exhaustion after we returned home. It was just so crazy but looking back I wouldn't have done it differently. We made some wonderful memories on this trip and the girls... The girls are still talking about it weeks later. Sometimes, I'll be driving them to school and they'll ask me if we can talk about the trip. Tower of Terror and all.

Yup, I'd say it was worth it for sure.