The Disney Marathon - Some Final Thoughts

I know, I know... I have written incessantly about Disney and the Marathon ever since I got back but bear with me here. It was a life-changing event, and a very fun one at that so I hope I can be forgiven. 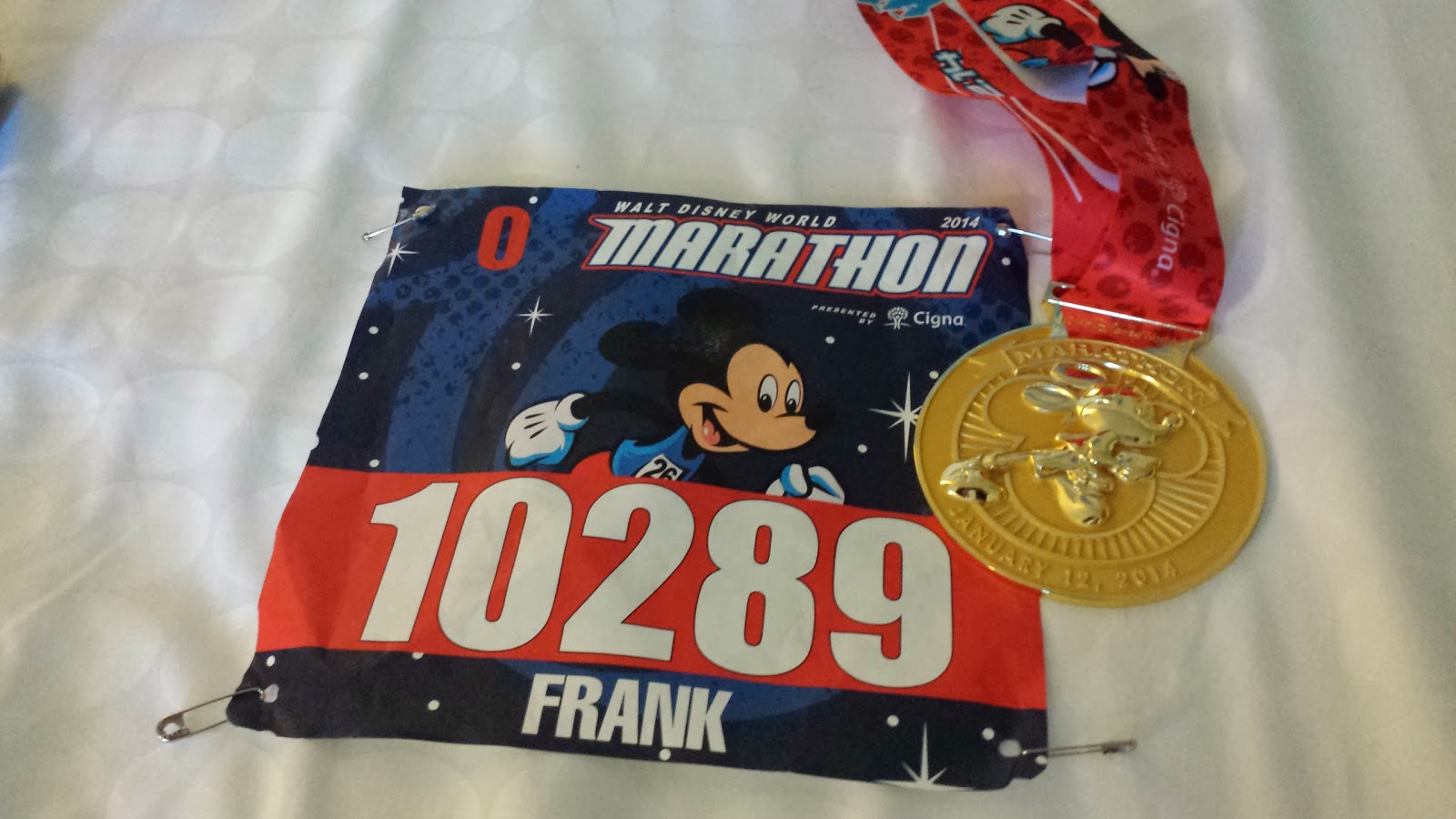 With the events of January 12, 2014 now in the rear-view mirror, I sit down to put together my conclusions about this awesome race.

Disney is awesome
Like you didn't know that about me already but more importantly, Run Disney is awesome. This is simply the best organized and best executed race I have ever taken part in. I know this is coming from what is essentially a rookie but compared to all my other races, Run Disney is simply on a whole other level. This marathon is 21 years old and it shows. Every single detail has been thought of. The volunteers were incredible and the logistics (transportation, hotels, expo...) perfect. The downside is that it is very expensive compared to others. I certainly can't do these races regularly but in hindsight I think it's a good thing. If I were able to run these on whim it would loose a lot of it's charm I believe. It's important that they remain out of reach in a way to keep me motivated.

I got my gear down perfectly
It took me almost 7 hours to cross the finish line. Thank goodness I had absolutely zero issues with the gear I had selected to run this event. I mentioned a while back I was having chaffing issues and you guys gave me some great tips and advice that came really, really handy. Including the purchase of some tights I now use under my regular running shorts. They are not compression. It's more like an extra layer and they work perfectly. Over 26.2 miles I ran without anything rubbing the wrong way. It sounds incredible but I didn't get a single piece of skin rubbed raw in any way. My trusty (and apparently infamous) NY Jets shirt also delivered. It is the only tech shirt I have that doesn't rub my nipular area. I have run almost every major race accomplishment in that shirt. It will be a sad day when it will have to be retired. 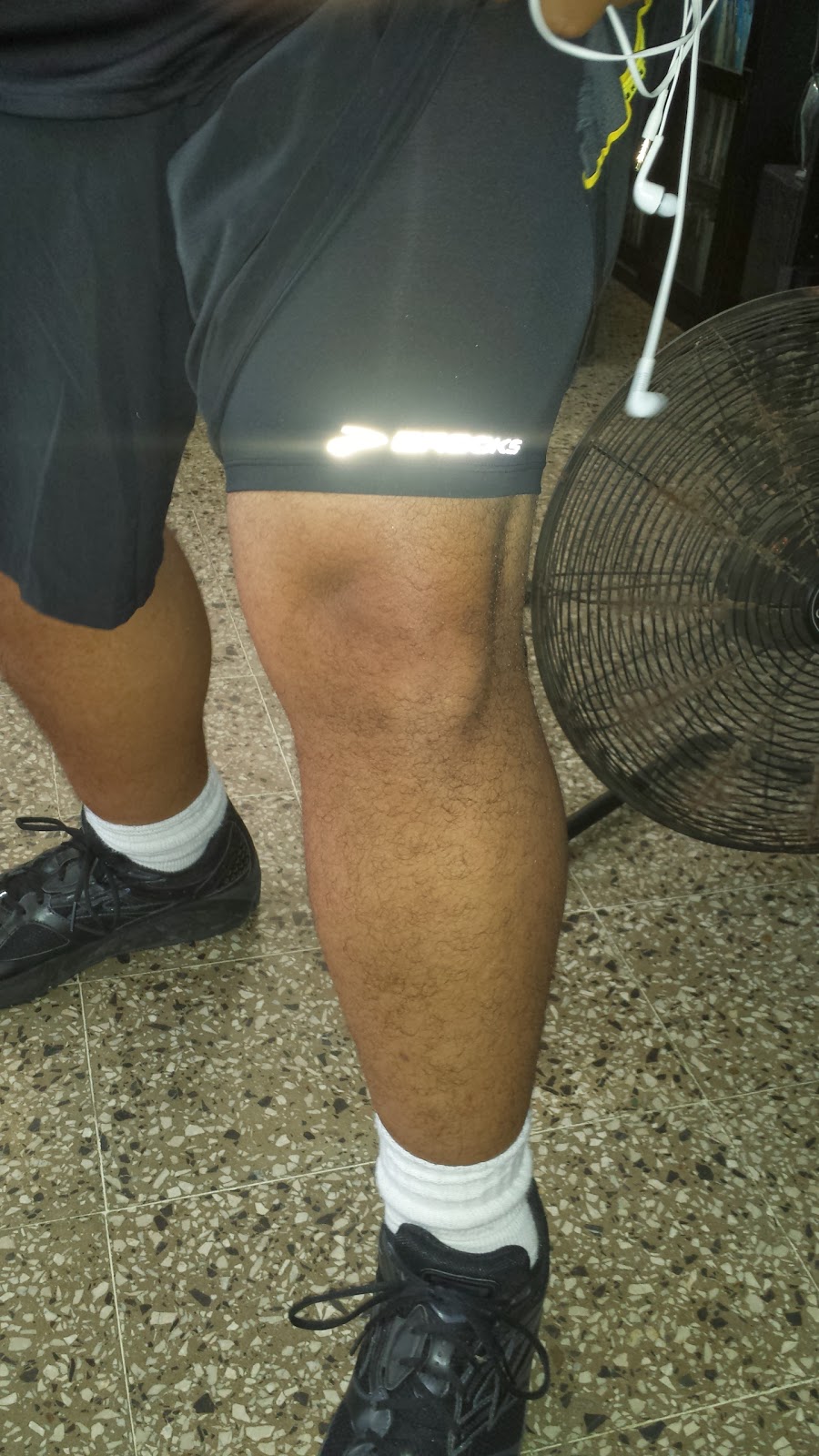 It says Brooks. At least I know the reflective stuff works

My arm band also delivered. Even though I didn't use it to carry my phone, I wore it to carry my gels. I used it on my forearm for easier access. As I used the gels, I was forced to keep tightening it(obviously) to compensate for the lighter load but that was about it. My Garmin, Butthead, (formerly Mr. Garmin) shined bright as well. I was wondering if it would last an entire marathon (more importantly, a marathon at my pace) and boy it did and then some. I didn't recharge it until 2 days after coming home and I think it would have lasted longer.

And then there's my phone. A Galaxy S4. This thing earned some stripes on this race! It played music the entire race, ran my interval's app, delivered all my splits and all the encouraging messages I got. I unplugged it from the charger at 2 am, it finally cried mercy at mile 26, when it didn't have enough juice to have the screen bright enough to see it. It didn't turn off (I thought it did at the time), the day was just too bright for me to see the screen. It finally gave out completely on the way to the hotel, much to the paranoia of a lot of people who were waiting for me to let them know I had finished. Sorry about that.

I also bought a cap at the Expo which saved my butt. Even though it was pretty cool the entire day, by the time I was heading to Wide World of Sports, the Sun was full-on on top of us. It was nice to not have it on my face. I know you are not supposed to put on anything new for a race but it was a calculated risk and it payed off. I will be wearing that cap frequently from now on.

The Unexplained
Even now, after much thought, I cannot tell you how I managed to run 26.2 miles after only being able to barely run 15 miles during training. For the sake of my own sanity I have decided to not think about it anymore. It wasn't just the incredible jump in mileage but being able to run the entire race so strongly. I mean, I ran every single interval until the end and, the last three or four miles aside, I maintained a pretty even pace the whole way. Sure, the weather helped and so did the adrenaline and excitement. Not to mention the motivation from the crowd and volunteers. But still, I think it's better to just leave it be. The fact is I trained my butt off and I made it to the start line and I finished. More importantly, I now know I can do it so no excuses during long runs. Ever.

The Unexpected
If you read my recap, I don't have to tell you what my favorite moment was. In fact, I don't want to talk about it. it's been two weeks and I still feel like crying when I think about it. But my second favorite moment was also pretty awesome. Before leaving for Florida I wrote a post letting everyone know I would be active on social media, reporting my doings and taking pics. I also invited everyone to both follow me on Twitter/Instagram/Facebook and to sign up for runner tracking so they could check how I was doing during the race. I'll be honest, I wasn't expecting a lot of people to do so. I was trying to be a good blogger. I figured a handful of friends and family would maybe sign up and that was it.

Then my timing chip stopped working after mile 20...

The response was... wow. I started getting messages from all over asking if I had finished, people concerned that something might had happened, people who were worried that my worst nightmare - a sweep - had come true. It sure didn't help that I wasn't able to post I had finished until well after getting back to the hotel. I was touched and extremely grateful. Especially with the people from The Loop, who took a minute of their time to go follow me on social media.

I Have Super Feet
This is an interesting side note: After running for almost two years now. Well over a thousand miles, many 5K's, two 10K's, a Half-Marathon and a full Marathon, I am yet to get a single blister, black toe nail or lost toe nail. Not a one. I often hear the horror stories and to some it's even a (bizarre) badge of honor. They write memes about this and yet my feet remain pristine. I'm beginning to feel left out.

And with that, we close the book on this awesome chapter of my life. Next up, we discuss what's coming up next in this crazy running journey.
Posted by Unknown at 9:49 AM