I've been to Disney World many times. However, there are two things I had not done until recently: The first is staying in a Disney resort which I have now crossed off my list twice. Once in the Yatch Club and for this trip, All-Star Sports. The second is eating at the table service restaurants in the parks or resorts. On this trip, I got to cross that one.

Like many families, when we traveled to Orlando, we used to attack the parks "commando" style; trying to take as  much as possible in one trip. Exhausting.  Even though we visited the parks many times, we would treat each trip like a military incursion just in case we would never get the chance to visit again. That's just how we rolled. Of course, being in such a hurry to see and experience everything doesn't afford you much time to sit down and eat so we stuck to quick service meals. I would see the people in the restaurants thinking "well, they sure aren't in a hurry. They'll miss half the park!" but at the same time I was sure curious about experiencing them. Also, in case you didn't know, Disney can be a bit expensive so I guess we were also afraid of sticker shock.

For the marathon, I wanted the trip to be as hassle free as possible so I included the Disney Dining Plan to the deal. That way I would not have to worry about meals during the trip but it also got me the chance to explore the undiscovered world that is the Disney World restaurants.

Liberty Tree Tavern
This was the first table restaurant we hit the very first day we were there. It ended up being one of two meals that are tied for first place in my mind as the best I had on the trip. 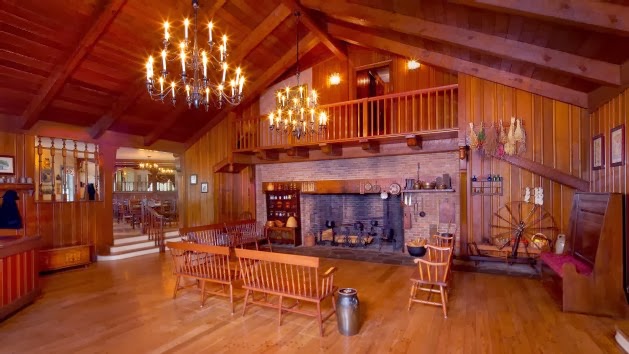 Located in Liberty Square (where you can see the tree that named the restaurant) this is one classic slice of colonial Americana. The decor and architecture, like the rest of Liberty Square, screams "1776!" When they call families to get them to their tables, they also call out the state or country they are from. I thought it was kind of corny until they called us and I felt a little tingle of pride. That's Disney for you.

The best way to describe this restaurant is to call it a hybrid. It's a fixed menu, like a buffet, but you don't stand up to go get your food. Cast members bring everything to you. And boy do they bring it to you. You can eat as much as you want and if the cast member sees you even hesitate when asked if you want more he/she will bring some more. Which is a good thing, because the parade of comfort food they serve here is mighty tasty. Roasted beef, pork and turkey; mashed potatoes and gravy, mac n' cheese, green beans, roasted root vegetables, stuffing... it's all good. And I forgot about the salad at the beginning. It was dressed with a pretty good strawberry vinaigrette. We almost filled up on just salad! Right before we were about to explode, we got served dessert: Johnny Appleseed Cake. Served warm with ice cream on top, it has apples and Craisins. I had never tried Craisins but based on this dessert I want a couple of cases. If they come with ice cream and cake all the time that is.

Via Napoli
I have often dreamed about eating "Around the World", or at least around the Epcot pavilions. Which is probably why the Wine and Dine Half Marathon sounds so appealing for me. However, doing all that eating on this particular trip would have probably not helped my trying to finish the marathon so my brother and I settled on Italy and it's most recent addition, Via Napoli.

Pizza is the name of the game here. Rustic, wood-burning-oven-roasted pizzas. They even named the ovens: Stromboli, Vesuvius and Etna. They are all active volcanoes in Italy. 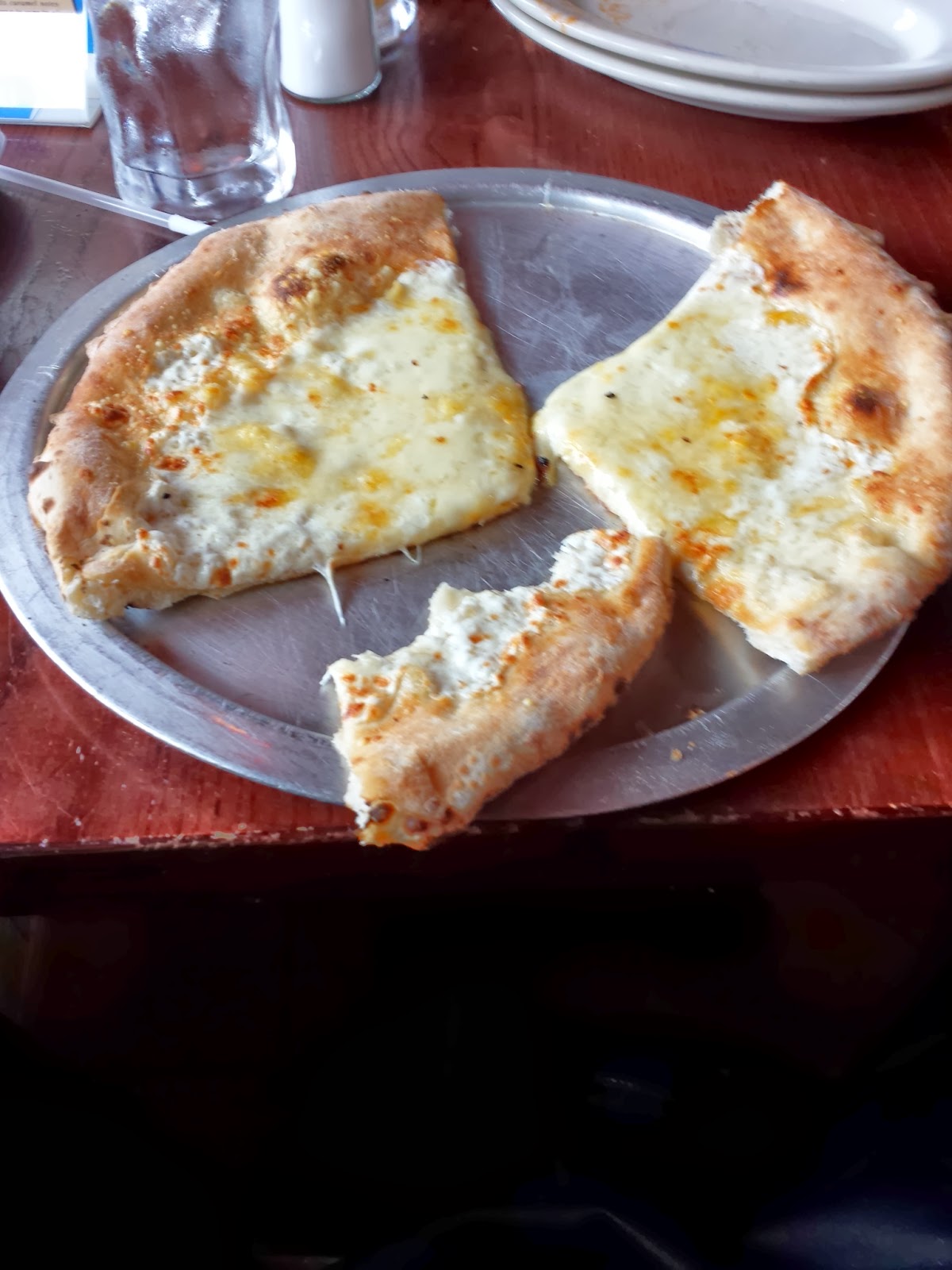 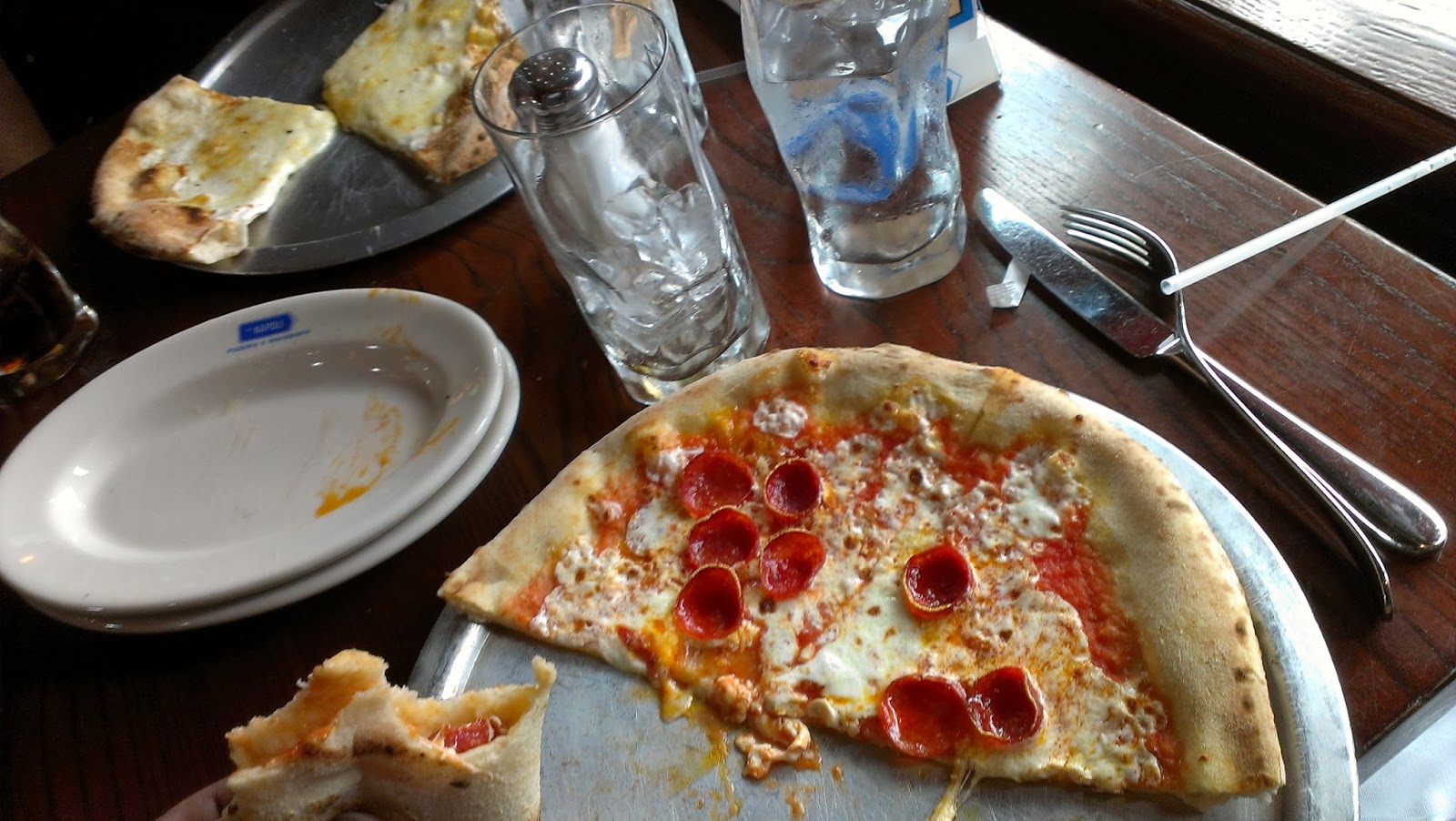 What can I say... this was pretty awesome. I ordered the Quattro Formaggi (four cheese) and my brother the pepperoni. We traded a slice so we could try both and wow. Crust was just right. Airy with a little crunch and just enough seasoning for you to want to eat it without any toppings.  And speaking of toppings, this type of pizza lives and dies on the quality on the ingredients and Via Napoli delivers here in spades. The balance of the four cheeses in my Quattro Formaggi(Provolone, Fontina, Mozzarella and Parmesan) was perfect. I literally could not stop eating which was a problem because these pizzas were huge! If this was the individual portion, I might as well use the large as a blanket to keep me warm at night. 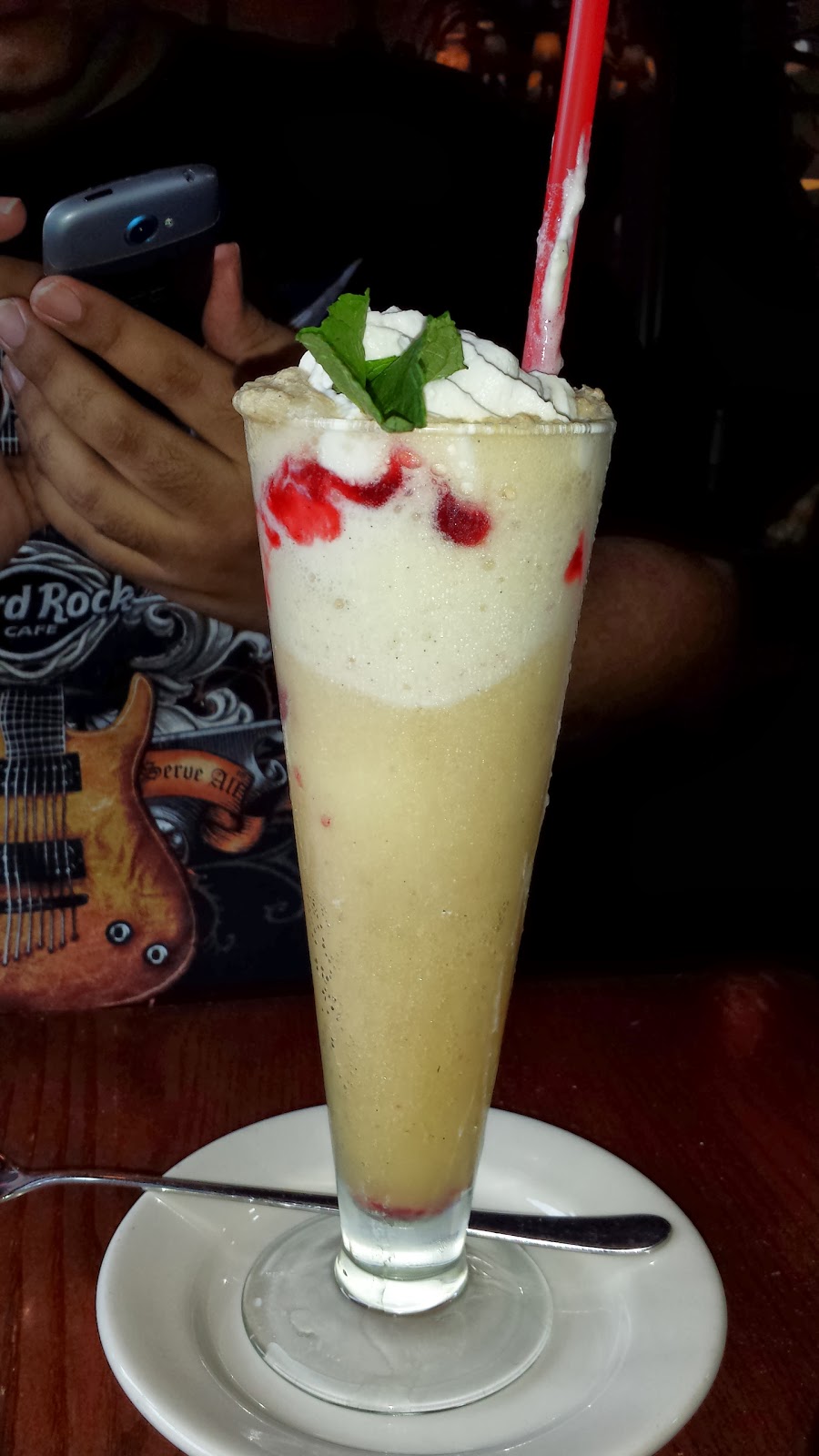 For dessert I had the Zeppole di Caterina which are Ricotta Cheese Fritters(Everything sounds prettier in Italian). They bring them to you next to two bowls : one with whipped cream and one with chocolate sauce. The word sinful comes to mind. The combination of the three components was delicious! But I couldn't eat it all. Way too much food.

By the way, this restaurant is at the very end of the Italy pavilion. We were given a table by a window and for a second there, it was like we were in a little fake Italy.

Raglan Road
On Saturday night, we headed to Downtown Disney to do a bit of shopping and to have my final meal before the marathon. Perhaps an Irish pub/restaurant was not the best of options. I mean, why go to a place where you are expected to drink and be merry when you should be resting? But, the original place we wanted to go was full so, Raglan Road! But don't worry. We didn't do any drinking or partying and we were on our way to the hotel by 7 pm.

I gotta say I loved the ambiance in this place. For some reason, I have a thing for Irish/British pubs and they pretty much had it all here plus, they had "Lord of the Dance" type dancers(sorry, I know there is an actual term for this but I don't know what it is). My brother had the Mixed Grill which he thought was just OK but I had the Gnocchi with Scallops and it was very good. The only downside was they put some bean-like grains (they looked like Edamame  but I don't think that's what it was) and it messed with the texture of the dish. Flavor though, was through the roof and the scallops were perfectly cooked. The gnocchi was just firm enough to stay together but melted in my mouth. I also had a potato soup that is one of the best I have ever tasted. That soup, is pretty much the only plate of food I paid for outside the Dining Plan.

The desserts we tried were nothing to write home about. In fact I can't even remember their names but my entree more then made up for it. It was a very, very decent final meal.

Sci-Fi Dine In Theater
If you thought that Liberty Tree Tavern was beautifully themed, then you have got to check this place out. Built inside what I assume was an empty studio from when they were still trying to make Disney's Hollywood Studio's work as a TV/Movie Studio/Park hybrid, this place has been turned into a 50's drive-in replete with cars and giant projector screen. 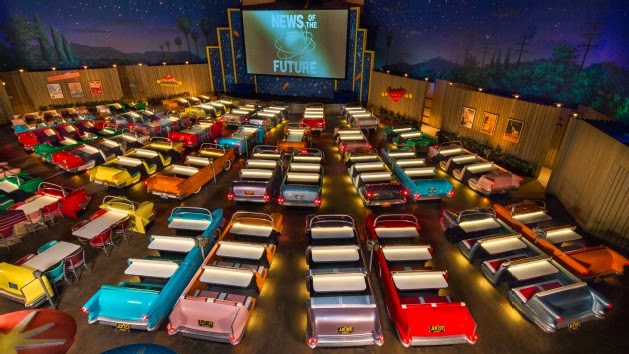 source
We laughed the entire time we were there. The feed on the giant screen is so bad, it's awesome. This is the reason alone to come here. The feed is filled with previews for movies so ridiculous, that you will be wondering just who was crazy enough to green light such a profusion of bad acting and horrendous special effects on the Earth. And the news clips are even more amusing (Walt Disney himself makes a cameo in one of them).

But that's about it. This is not the place if you are looking for more gourmet fare. In keeping with the theme of the place, the food is basic burger joint stuff so adjust your expectations accordingly. The Build-Your-Own Angus Burger I had was pretty decent, especially with the onions and mushrooms; and the fries were awesome but it needs to be said: I had just run a marathon so maybe that had something to do with it. 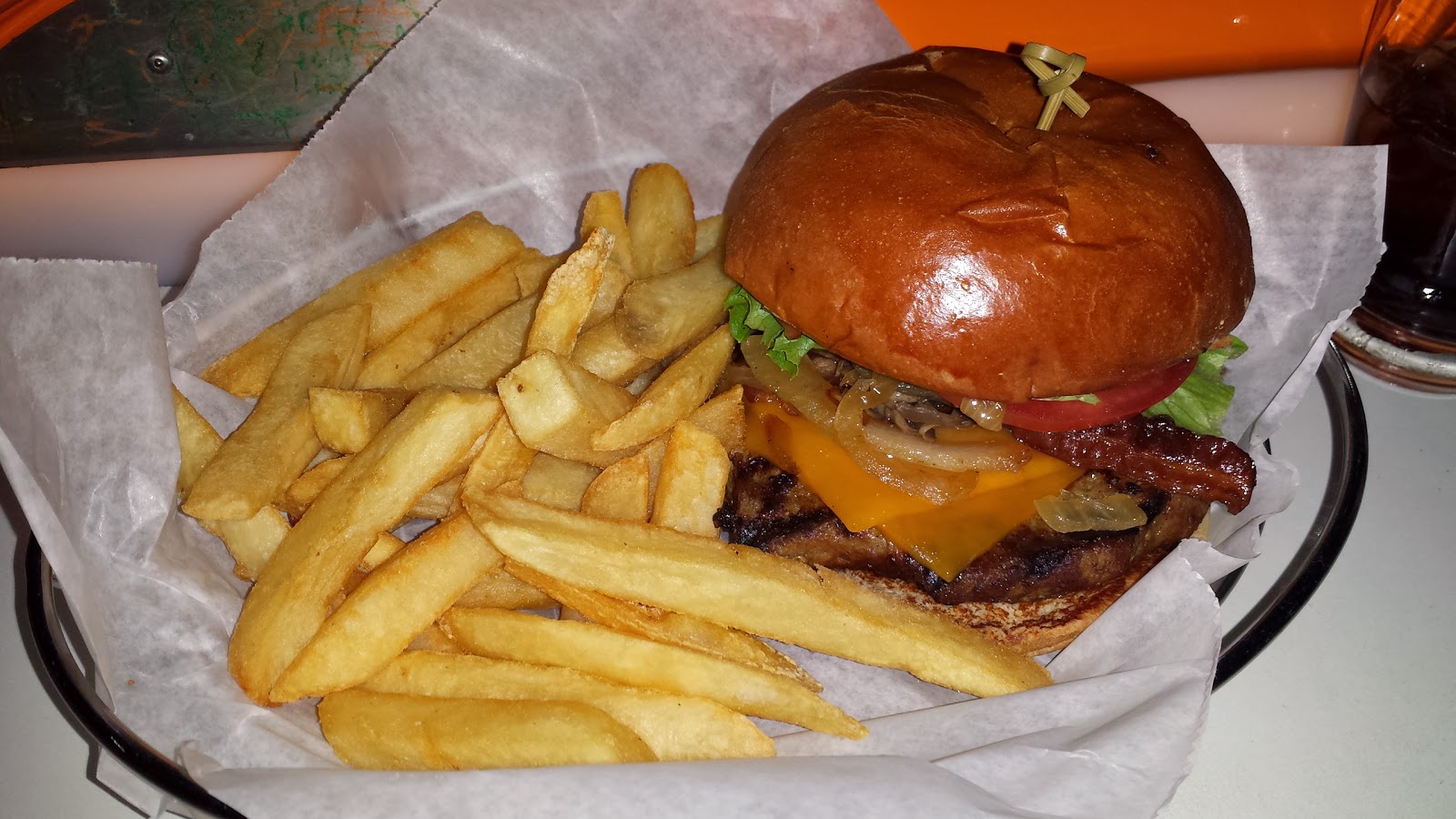 And those were our table restaurant adventures. A lot of debate has been stirred about the Disney Dining Plan and whether it is worth it. I can't speak for everyone but it definitely worked in our case. Even with all the debate, there seems to be a general consensus that if the members of your family are hearty eaters (guilty!!) you get more out of it. Also, if you like trying new things -and in Disney World there is plenty to try- this is actually a very good deal. It was nice not having to worry about food during the trip. Outside of the Dining Plan, my food bill was 6 bucks.

So, if you are staying in Disney property and the above applies to you, I highly recommend the Disney Dining Plan. If you are a runner doing a Disney race, then I doubly recommend it.