What a year this has been.

Although writing this post was a given, it has become even more meaningful as I head into the taper period of my marathon training. As I explained in a previous post, the mileage peak of my training did not go as planned and with officially 9 days to go for Disney Marathon weekend, I'm seriously worried. They say (I always wonder who "they" are, and why they are so opinionated) you should never look back but I disagree.

How to know how far you have come if you don't? It is very important in a journey like this one to allow oneself to savor the successes. They are not always obvious because you are always moving forward and thus, always struggling (and improving). So it is easy to not notice your gains. This post is to sit back and bask in the glory of what was, in running terms at least, the year 2013.

An interesting by-product of all the running I did this year I have to point out: My legs are the proverbial "tree trunks" you keep hearing about so much. I wasn't expecting that. As a runner you have an image of the very skinny pros doing marathons looking almost frail; especially the legs but no no. I think my calves are bigger than before and my quads... wow, they are rock hard! My wife can't stop touching them. Heck, I can't stop touching them! I feel muscles in there I didn't know I had. Being overweight, having your wife notice any physical attribute as "sexy" is uncommon so thank you running.

In January, my goal for the year as far as mileage, was very defined. I had run about 300 miles the year before (I started running in march/April) and knowing what I had ahead of me, I thought doubling that was more than reasonable without going to extremes. Sure enough, I reached 600 miles... in November. I'm probably gonna fall a few miles short of 700 miles but still, I totally crushed that one. Next year? 800 sounds like a nice number...

Again, back in January, the farthest I had run was 5 miles and I was just starting to train for my first 10K. In November of 2012 I wrote a post called The 13th Mile, in which I talk about running 13 miles for that week total and how difficult it seemed to run that much in a single run. How long ago that seems. As of this post, my longest run is 15 miles, averaging a little bit below 30 miles a week. More than twice that first 13 mile week, not to mention I now have a Half-Marathon under my hydration belt. Here's hoping that somehow translates to 26.2 miles on January 12.

Sometime last year, I don't quite remember (or maybe I don't want to), I tried to run a single mile for measuring purposes. I wasn't expecting much but I was shocked when I looked at my phone (No Mr. Garmin back then) and saw 14 something (again, fuzzy details, it was too painful), almost 15 minutes. Had I allowed myself to go that far? It was certainly a wake up call. For the sole purpose of this report I ran a mile today, this time with a lot more expectations and thank goodness, those expectations were met. 9 minutes, 38 seconds. A 5 minute improvement and a sub-10 minute mile. At the start of the year, I would have (and did) called a sub-13 an achievement.

In August of last year I ran the Popular Bank's 5K. It was my was my first race ever. It took me almost 49 minutes to complete. Even now, I'm a bit embarrassed to say that. In November of this year I ran the Alliance 5K: A pretty difficult and hilly course, in 37:43.  A 12 minute improvement. Not bad...

At the very end of February, I ran the World's Best 10K, my first. I ran it in 1:37:21. This by the way, is my pick for my top run of 2013. It was clearly a turning point in my running. Before this race, I couldn't understand how runners could do things like, run 4 miles then pick up the pace and run faster. I just couldn't do it. Until this race. After 5 miles, I actually found it in me to run the final mile a whole minute faster than what I was running. Everything changed after that. I immediately started a Half-Marathon training plan after that, then another. In many ways, that race is when I truly started to feel like a runner. A couple of weeks ago I ran the A Runner's Love 10K the day after a 12 mile long run. I ran it in 1:22:51. A 15 minute improvement. Again, not bad at all...

I ran my first Half in November and I haven't run another so nothing to report here but, assuming I survive the gauntlet that is the Marathon in January, I'm thinking a sub-3 hour Half-Marathon is the next logical goal to accomplish. Stay tuned.

OK, time for the Biggest Loser moment. The before and after picture. I spared you the disgust of posting a pic of me flexing my leg muscles and I hope you forgive me for indulging here but it is almost a requirement when on this journey, to post these so here they are. At my heaviest (that I actually measured mind you, because I could have been heavier at some point) I weighed 319 pounds. Not a pretty picture in the most literal of senses.

Not my finest hour

As of my last weigh-in I'm at 269 pounds so that is 50 pounds off from that "worst" moment. I know it's not "Biggest Loser" impressive but I tell you what: it has made a huge difference in my running. Though still slow and overweight, the gains have been plentiful as you can see by the numbers above. By the way, those scratches right at the top of my abs (or, where the abs should be. You know what I mean.) is from my heart rate monitor. I have no idea how it scratches me like that as it doesn't bother me while I run but there it is. 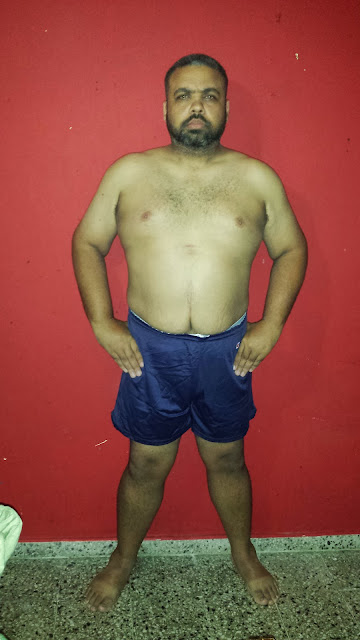 Not my finest hour either, but an improvement

While I know I could have done more in terms of weight loss, which probably would have put me in a better position to run the marathon but the thing is, I feel much more confident about keeping the weight off than when I was yo-yo dieting and losing a bunch of weight fast. Mainly because I made small changes that are easier to maintain than trying to fit an extreme change in lifestyle. Going forward, I will have to adjust my caloric intake as I lose more weight but again, small and slow is the ticket.

So there it is. The year in running from yours truly. Hope your year in running was a good and successful one as well and that you all have a great New Year's.
Posted by Unknown at 8:48 PM