Clapton is a Runner

Eric Clapton is not a runner. For the sake of clarity, Eric Clapton is a British guitar player. A very good and famous guitar player. He became famous way before my time, around the 1960's and had a kind of resurgence in the 90's after filming an MTV Unplugged. (Do they still do that?) I admire this man as a guitar player. He once released an album of blues covers called "From the Cradle" that I still listen to today. Great stuff.

Back in the 60's, when he first rose to fame graffiti started to pop up all over London that said "Clapton is God". It was the 60's and whoever wrote that was probably a big Clapton fan and doing a lot of drugs but it stuck and it became kind of a thing during the time. 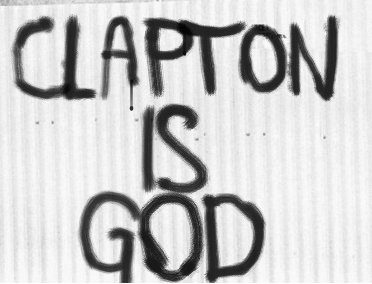 Anyway, fast forward to the 1990's and Guitar World Magazine is interviewing Eric Clapton about his new album (the aforementioned "From the Cradle") and they asked him what he thought about the whole "Clapton is God" debacle. He started laughing and said "Well, I felt it was quite justified to tell you the truth."

He was joking of course, but he went on to explain that to him -especially during that time- perfecting his craft was everything. He took guitar playing very seriously and often got mad when his peers did not. They would play to be famous, for the parties, for the drugs, for the girls... " I was playing to save the f@#!ing world." (his words) It's not that he felt it had to be important to anyone else. It was the most important thing to him.

That interview always stuck with me and reviewing my feelings after the Puerto Rico Half Marathon, I'm reminded of it once again. Also, I have been sick these past few days so it could just be the meds talking here, but I understand perfectly what he meant by that because I feel the same way about running.

I am constantly talking about my issues during races and how it all amounts to me leaving everything on the race course like my life depended on it.

My running is not gonna change the World. It's a speck of dust on a speck of dust in a universe of things happening on this planet. It's insignificant and if I stopped running today no one would care or notice. It's not like I'm gonna win and even if I did would it really mean anything? However, when I toe the line at a race; I don't care if it's the local 5K or the Disney Marathon, I run it like the fate of the entire World depended on it. I take it very seriously. From the moment the National Anthem starts to be played, I switch to "Freak Mode" and everything else doesn't matter. Sometimes to the detriment of my race strategy.

After pondering the events of my last race race, I have decided that this is not a bad thing.

Sure, it might get in the way of some well laid-out plans once in a while but that just means I have to work a little bit harder to achieve some goals. Also not a bad thing. Sometimes I think that if I lighten up a bit about it, not take as seriously, things would be a little easier come race time. Losing that passion, even if it is on something as trivial as running, that would be a bad thing. If it didn't mean so much to me, I probably would not be doing it.

So adjustments will be made and I will try to improve and train smarter but come race time, I will run like if I was one of the elites in the front corral. I will run like cute puppies will be tortured if don't. Yes, I will run to save the f@#!ing World because someone has to after all.