OK, to round out my Las Vegas trip(and clear my head regarding my knee) I want to tell you about three places I ate at that I think are worthy of mention. If you ever do travel to Vegas you might want to check these out. 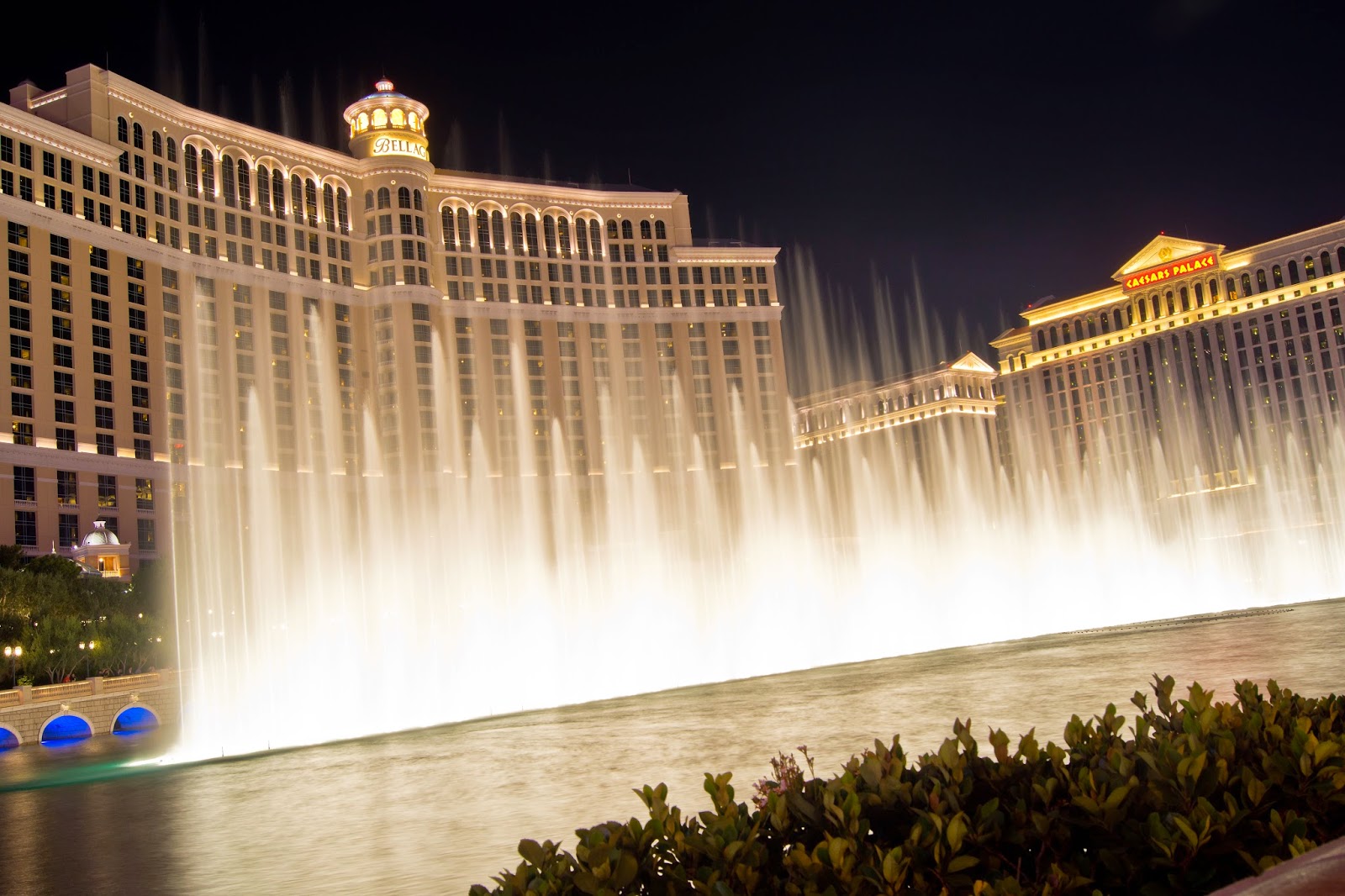 In a place that seems to have invented the All-You-Can-Eat Buffet. There really are two that stand out above all. One is at the Río Hotel and the other one is this one. Since I had tried out the one at the Río on a previous trip, I lobbied to try this one out and it did not disappoint.

There is not a lot I can tell you regarding the food. It's good, it's extremely varied and there is a lot of it. What sets the Bellagio apart is quality. Just because there is enough food at one time to feed all of America in one sitting doesn't mean they skimp on the details. The stuff I tried was well cooked and tasty and some dishes were downright awesome.

But the reason I decided to mention it in the blog is entirely non-food related. I mention this place because in all its opulence, all its quality, all its excess, someone just plain screwed this place up. You see, like many, many people who eat there daily, I had an urge to go to the bathroom at one point. No problem finding one. They are labeled well enough. But once I got in it, it hit me right in the face: There is only one toilet. One. Is this some kind of sick joke?! Really? This is akin to a pub giving away free beer 24-7 and not having urinals. Who the heck thought this up?! And here's the thing. You go to any other place in the hotel (or any other hotel for that matter) like the casino and there are bathrooms  everywhere with rows and rows of toilets. I guess that's how they get people to leave.

Located Downtown right on Fremont Street (though not beneath the "TV Roof" you gotta walk a bit past that) is this very small and unassuming place. And I mean small. If 7 people go in at the same time, that's a full house (no pun intended). There is an al fresco patio in the back but who would want to eat outside in 100 degree heat??!!

Well, as it turns out a lot of people do. The place is that good. It has generated a lot of good word of mouth and you can't read a "best of Vegas" article without this place popping up in there. And it lives up to the hype guys. For real. I ate with my brother and we sampled three dishes. An appetizer called Thai Pork Jerky which is fried pork served with rice and their signature waterfall sauce. The combination of the rice, pork and sauce was awesome. The waterfall sauce plays that combination of sweet and spicy flavors which is so part of Thai food. Loved it.

Then we shared two entrees: The Awesome Noodles and the Short Rib Fried Rice.


The Awesome Noodles live up to their name and then some. At first, when you look at the dish you might get confused. The noodles are flat and very wide. When you at them mixed with everything else, it's almost like there is no noodles. They look like vegetables or something. Don't let that fool you. Dig in and get ready to be blasted by classic Thai flavors!

The rice was even better. Stir-Fried with the aforementioned Waterfall Sauce, you will not want this dish to end. My brother and I kept switching plates to keep tasting both until we ate it all.

A part of me feels a little ashamed of having eaten at this place but we were in Vegas. When in Rome...

I don't think this place could legitimately exist anywhere else in the World. In a place that revels in excess, this joint takes it to a whole other level. 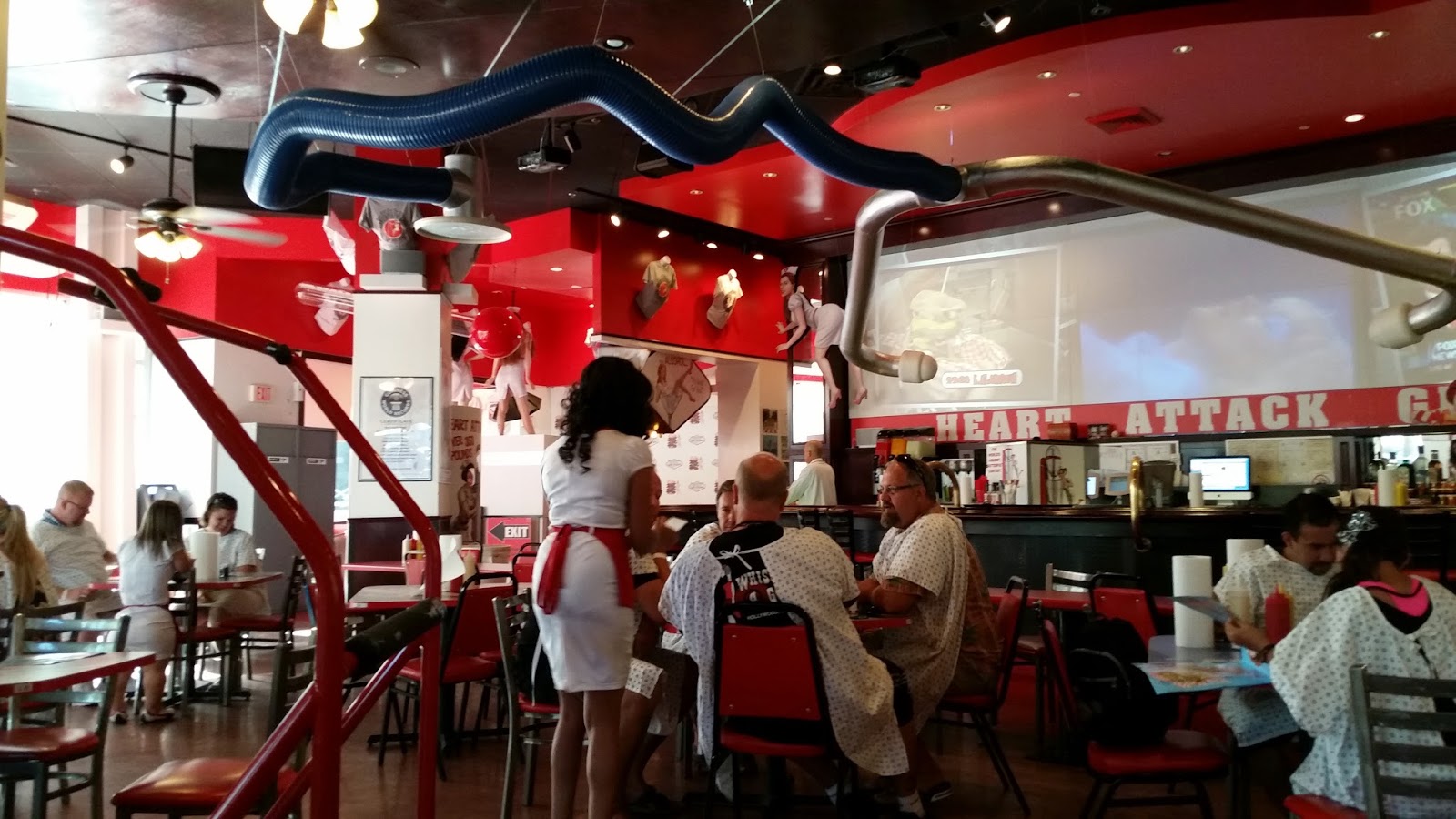 Let me begin by saying that anyone who weighs 350 lbs. or more can eat for free here. There is a huge scale in the front where you can check if you qualify for this particular perk. The menu -if you can call it that-  is basically an experiment in how far you can take the "unhealthy" theme of the place. And unhealthy is the key word. On one of the columns proudly hangs their Guinness Book of World Records plaque declaring it the "Unhealthiest Restaurant in the World". Here are some facts:

1. To eat here you have to wear a hospital robe. No exceptions 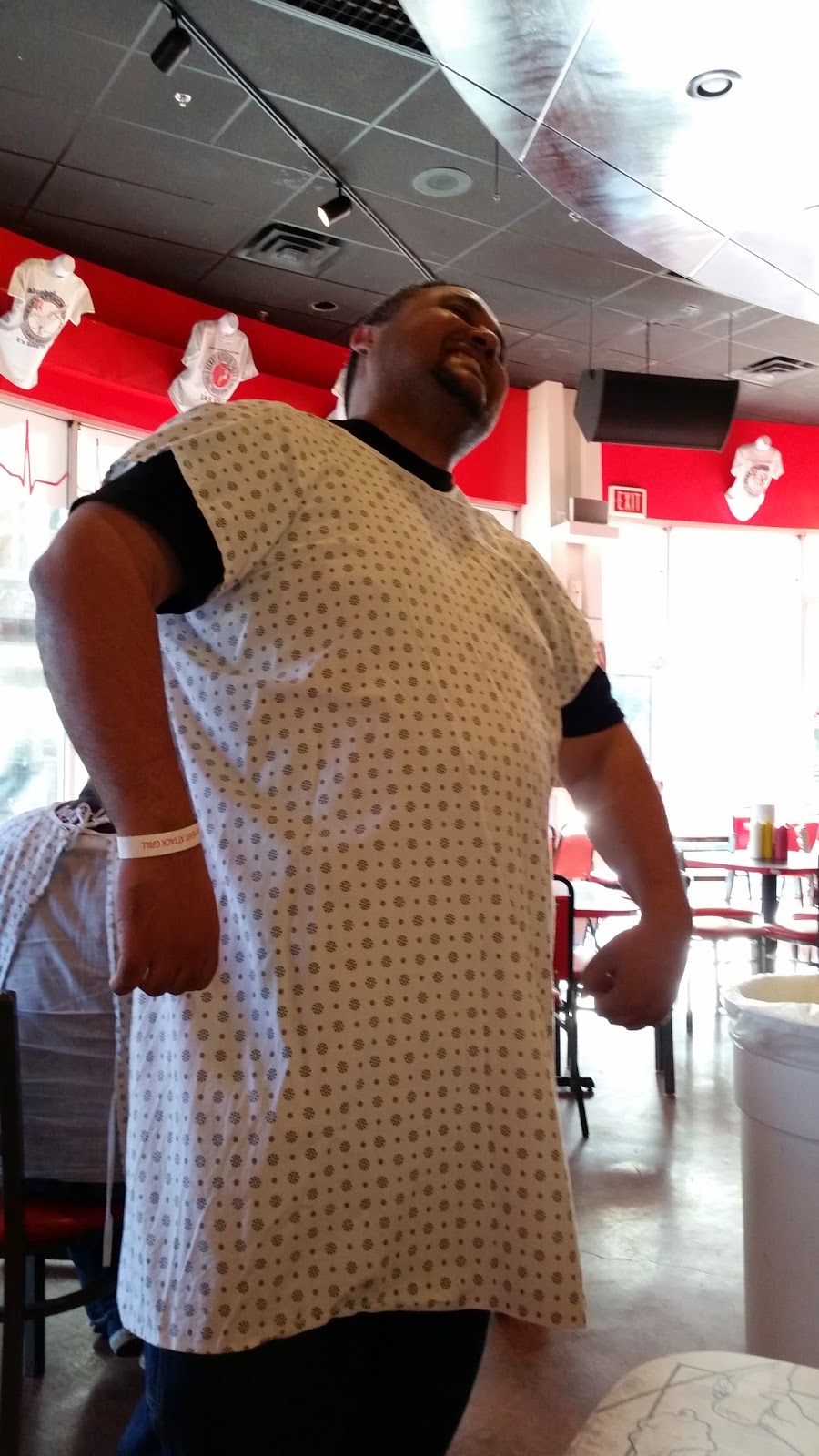 My brother, the model

2. Want a beer? They only sell the biggest serving of whatever beer they have. Shots are served on pill bottles or injections. Wine comes in an I.V. drip.

3. They only serve Coca Cola from Mexico. Why? They use real sugar instead of corn syrup. Because, you know... Mexican Coke, that's the really good stuff.

4. Fries are deep fried. In Lard

5. The burgers are cooked on the griddle also using lard.

6. They claim that their milkshake has the highest butterfat content in the World.

7. The menu has only two items: The Bypass Burger which you can add meat patties to from the Single Bypass all the way to the Quadruple Bypass and beyond. They also have a Chili Dog. A huge Chili Dog. That's it.

Our waiter (they are all dressed as sexy nurses) came in to take our order and warned that no substitutions can be made. For example if you want bacon and cheese with your Double Bypass, then its 15 slices of bacon. No exceptions. Me and my brother both ordered the Double Bypass Burger and decided to share an order of Chili Fries just to try them out. 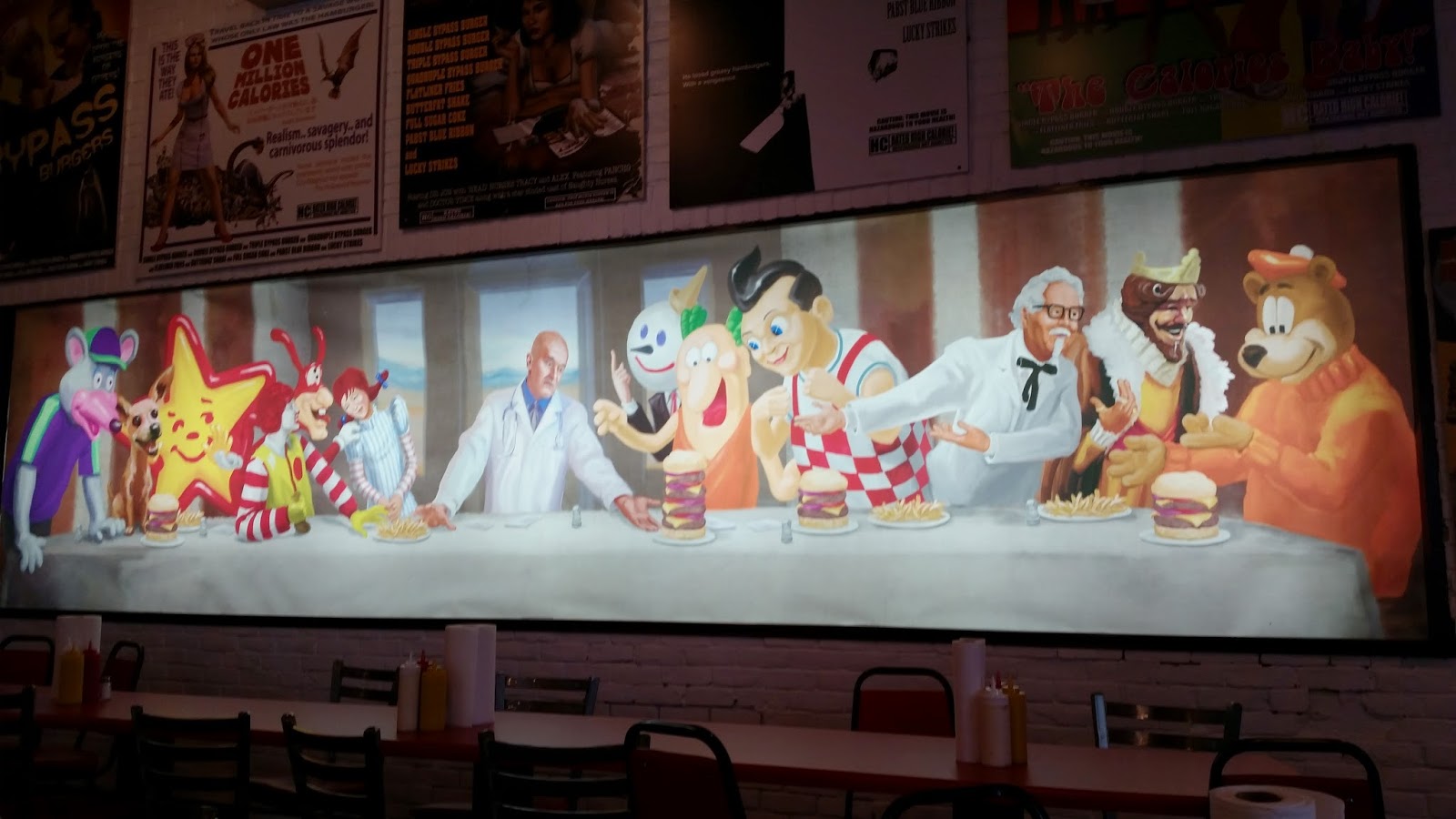 There is so much wrong with this picture.

The burgers as you would expect, were huge. I could barely get a whole bite in my mouth. The fries looked as if they had a ton of grease on them with some chili thrown in. But the million dollar question is: Is this place any good??!!

Well, yes and no. Making no compromises means they can add flavor any way they want but there is a point of diminishing returns. The flavor is there, surely but eventually the insane amount of fat catches up with you. It coats your stomach and your lips and no amount of goodness will make you keep eating.

But the spanking will.

Just as my brother and I were pondering just how much food we were gonna leave on the plate, a "nurse" took a couple in another table to what seemed like a torture rack with a video camera attached to it. After making one of them bend over this device, she took a wooden paddle and proceeded to spank her. Hard. Very hard. About three times. Then the guy, who got spanked even harder. Their crime? Not finishing all  their food.

Oh, we finished our food.

Look, I'm in no way recommending you eat here. And I wouldn't even dare imply that you go there regularly but the whole point of this place, is the experience. We had fun. Sure, I didn't eat anything else until I got back home the next day as I was so full but it was fun. And that's the whole point. Take it for what it is and make sure you finish what you ordered. Watching other people get whacked is fun but getting hit yourself... Don't think so.
Posted by Unknown at 12:25 PM