And Now Reporting Directly From the Disneyland Half Marathon

While I still owe you guys some posts about my Vegas trip, we must interrupt our regularly scheduled programing for a very special treat.

As I mentioned a while back, Among my many "must-do" races is the Disneyland half Marathon (Then again most of my "must-do" races are Disney races.) and it's new challenge, The Dumbo Double Dare in which you run the Disneyland 10K on Saturday and the Half on Sunday. Running it this year would have also earned me the Coast to Coast medal, where you run races in both Disneyland in California and Disney World in Florida within a calendar year. Alas, it was not to be.

In comes Donald to the rescue! 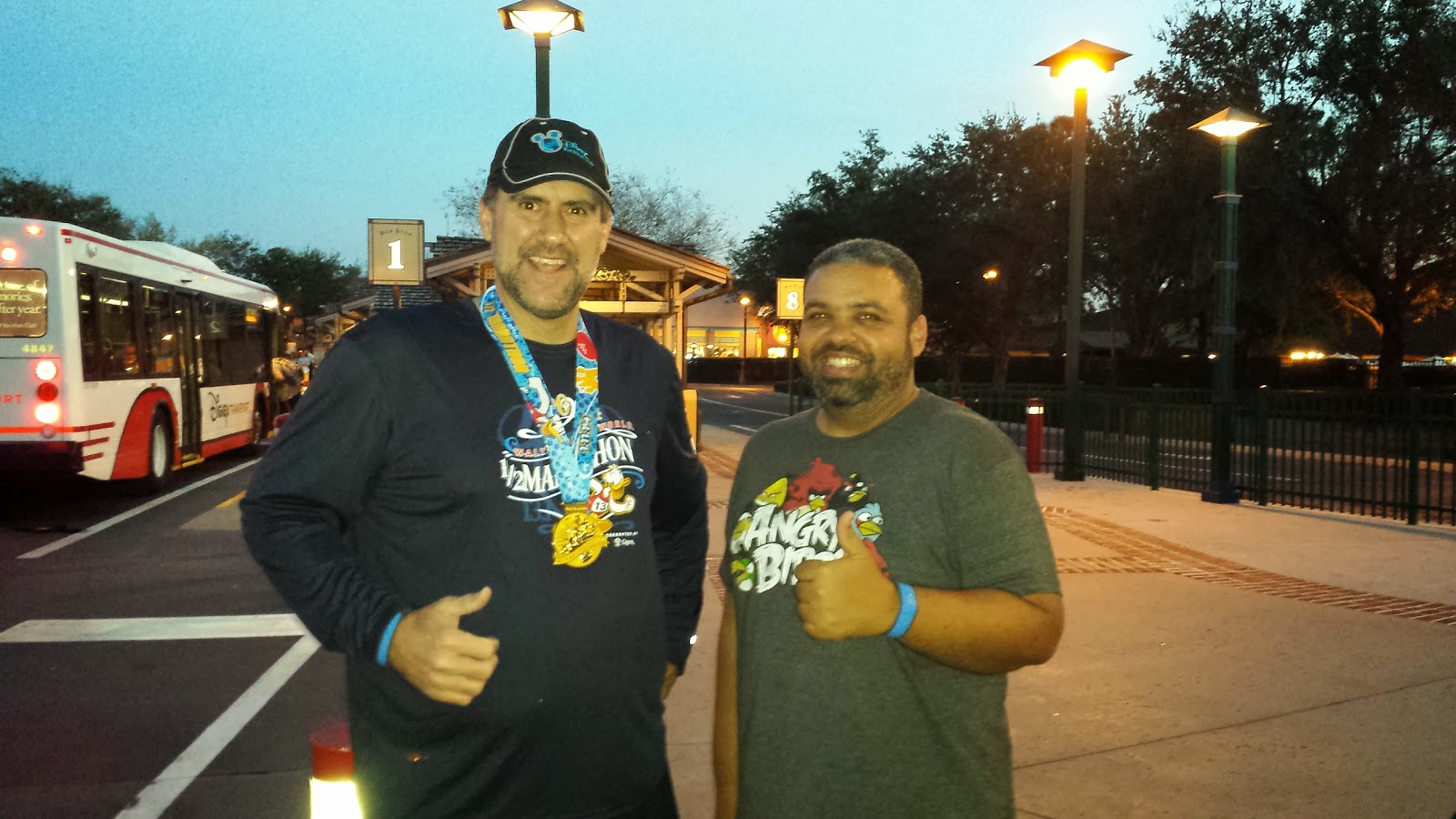 Donald and Frank circa January 2014, the day before the Marathon

No, not Donald Duck. Donald, who is in the Team runDisney Facebook group with me and I got to meet in person during Marathon weekend, who did get to travel to California and as if completing the DDD and earning the Coast to Coast medal was not enough, he also volunteered during the Expo! But I will let Donald give you the details. When I heard he was going to California I thought: "Hey, why not have Donald report on his experiences during the race weekend? It will be like the Fat Runner having a correspondent, just like in the news!" So I asked if he could guest post on the blog so, for the next several posts, Donald will be giving us the 411 on everything Disneyland. You are not going to want to miss this folks. I'll let Donald introduce himself and starting tomorrow, the posts will written by him.

Take it away Donald! 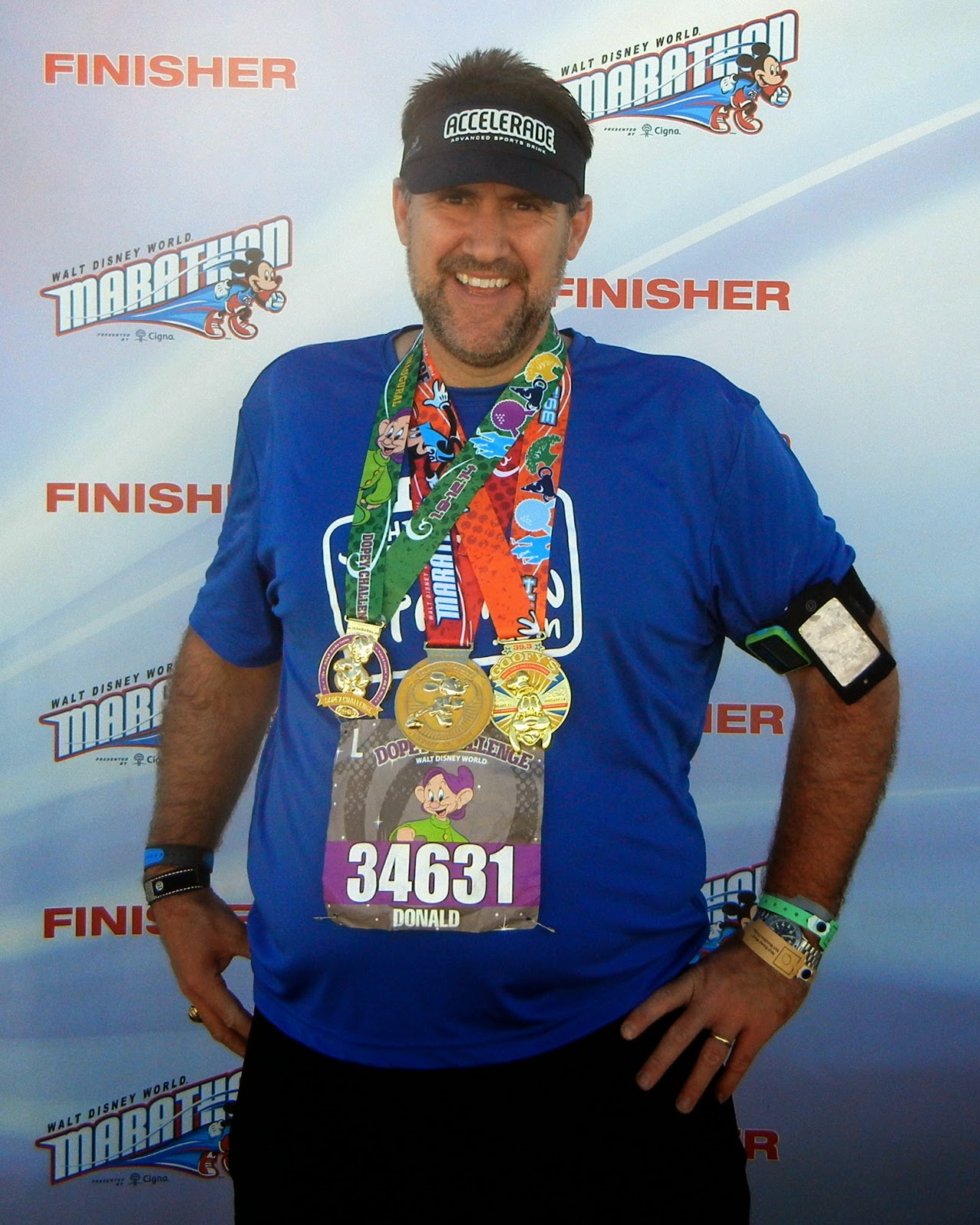 I first want to say, “Thank you Frank for the encouragement along the way and the motivation to keep going.”  Several months ago, when you asked if I could write about my first experience to Disneyland and the Dumbo Double Dare experience, I was excited and couldn’t wait till it arrived.  That day arrived quickly.

Let me begin with a little background about me.  I, too, am a fat runner, married, with three beautiful girls.   I have worked in law enforcement in North Georgia metro Atlanta area for the past twenty three years and gained a little weight over time.  Being 6’6”, I carried it well.  During a work insurance health fair in fall of 2011, I found out I was Diabetic Type II.  Weighing in over 365 lbs., I was told I had to lose weight or risk the health consequences.  I chose to do something about it and become more active.
A co-worker had several medals on his wall, and the runDisney medals caught my eye.  I made it my goal to run the Walt Disney World Half-marathon.  I knew I had to learn to run by walking first, and building up to running.  During 2012 I did just that and dropped 80 lbs.  My first official 5k was on Castaway Cay, January 12, 2013.  I changed my goals along the way and signed up for the Dopey Challenge.  Through Run Disney, Facebook groups, and running blogs, I was introduced to Frank and became a fellow ‘Fat Runner’.


The Dopey Challenge was my first Marathon.  In one year I had progressed from 5k to Marathon and completed not only the challenge of four back to back races, but proved to myself that I can overcome many obstacles and do what I never thought possible if I put my mind, heart, and soul, with support of friends and family, into it.

As you can see, we share very similar stories (though he ran Dopey as part of his first marathon so mad props for that!). You guys are gonna be in great hands for the next few days so stay tuned.
Posted by Unknown at 4:37 PM