Armpocket i35 Armband - A review

Right around the turn of the Century, small was reigning supreme. At least when it came to cell phones. Small was good, small was grand. In fact, for a while there, I thought we were gonna end with pellet-sized devices that we would implant in our ears. Then, the cell phone begat the smartphone and everything changed. With them, came the ability to do stuff you could only do glued to your computer anywhere and everywhere. In a prophetic turn of events, we now indeed, have the whole World in our hands.

Of course, we are not content with just having the whole World on our hands. We want it in HD and we want it in a big screen so the modern smartphone is has now become, well... huge. The first time I saw a Samsung Galaxy Note I thought it was some sort of joke. I guess the pellet-sized cell phone will have to wait for now.

Modern smartphones then, bring modern problems. For runners this means having to carry them while doing what we like to do most. Smartphones now carry our music, keep us informed of our intervals and even keep track of our location and how far we have run. For many, they have become as much a part of their gear as running shoes.

Enter Armpocket. A company that specializes on helping you, the runner, carry your newest technological marvel. They have an arm band for almost every size smartphone out there; from the original iPhone to the behemoth Galaxy Note series. I learned about them after acquiring my latest phone, a Samsung Galaxy S4, which is on the larger side. In the interest of keeping it away from harm, I also bought an Otterbox case for it but the end result, is that what was an already big device, is now enormous. I had two previous arm bands and neither are even close to accommodating the S4. A tour of several stores bore no fitting results so I finally  ordered an i35 direct from Armpocket.

As of this writing, the i35 is the biggest arm band in the company's lineup. According to them, it is designed to hold either a Samsung Galaxy Note 3 or a Galaxy S4 with an Otterbox case, which is what I own. 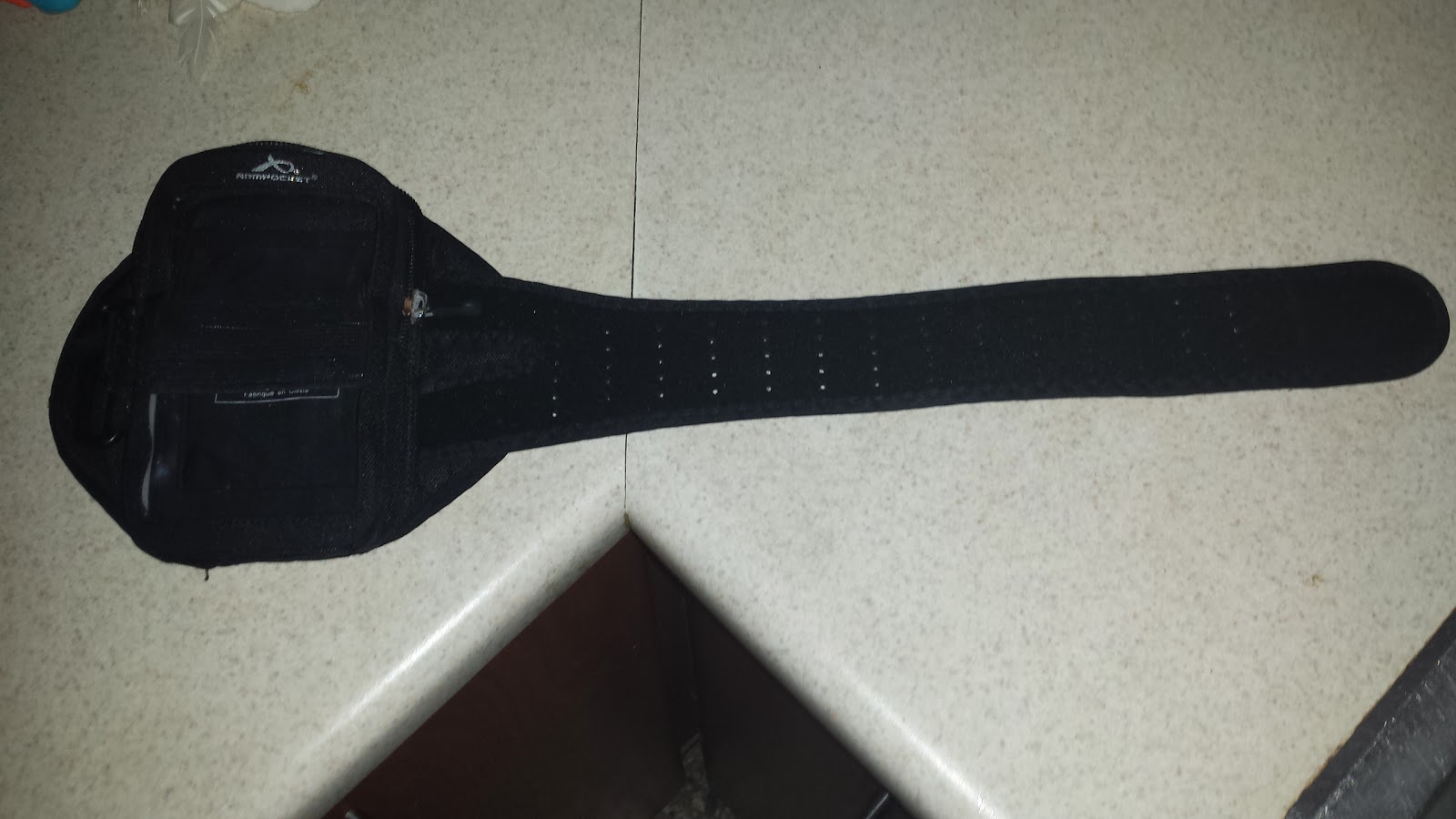 I ordered it with the large arm band.

The band itself is made of neoprene while the actual pouch where the phone is held, is made of a pretty sturdy fabric. It also has the obligatory clear "window" so you can see your phone through the band and, when placed correctly, you can use the touchscreen through it. The bottom of the pouch has holes so you can pass your headphone cables through while keeping the whole thing zipped up. It also has a small velcro loop to tie up your excess headphone cord. This feature has become pretty handy. 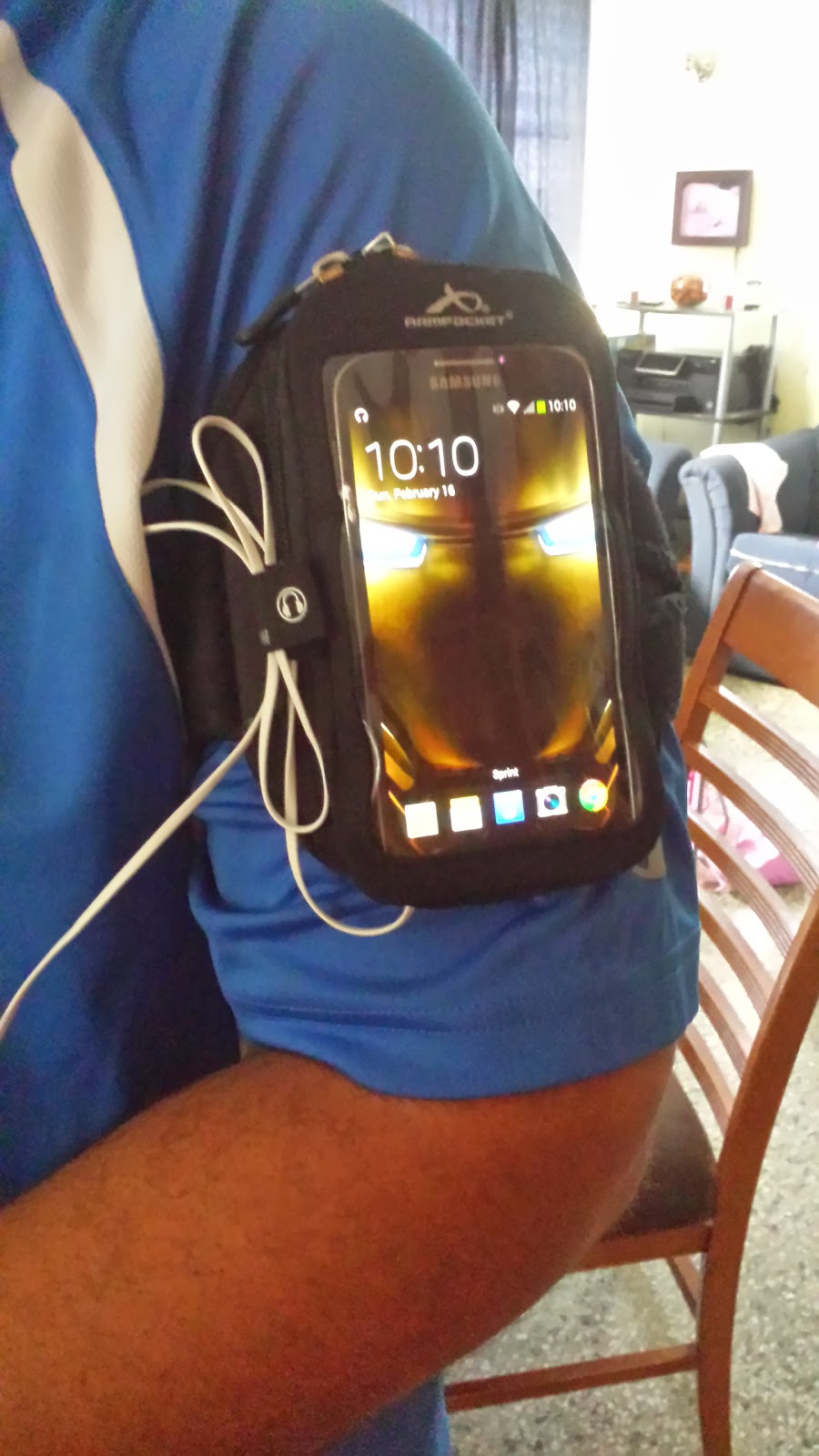 Life is definitely better when you have a loop for your headphone cable. No really.

There are several pockets or compartments inside to keep other stuff organized. According to Armpocket it could be credit cards, id's and keys among other things. We'll get to that in a minute but first and most important: Does the phone fit in there?

Well, the simple answer is yes it does. But (there's always a "but" isn't there?) there are several things you should take into consideration. As advertised, the i35 does indeed accommodate the Galaxy S4 with an Otterbox case but just barely. In fact, with the head phones plugged in, there is no way to zip the pocket shut. The top of the 1/4  jack pops out. Even with no headphones, it's tight fit with the Otterbox. Here it is with my wife's phone and case. 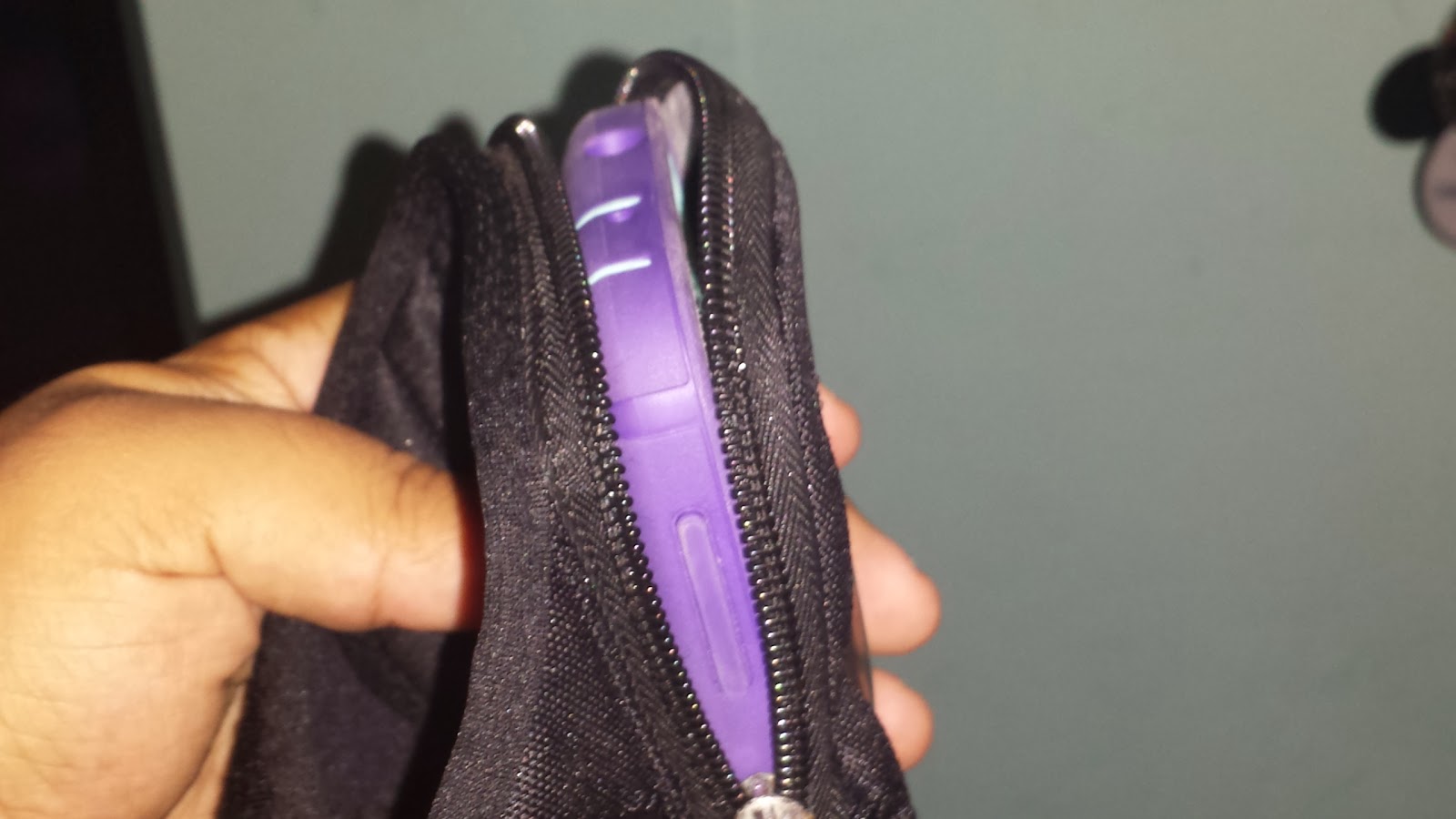 Bit of a tight fit. 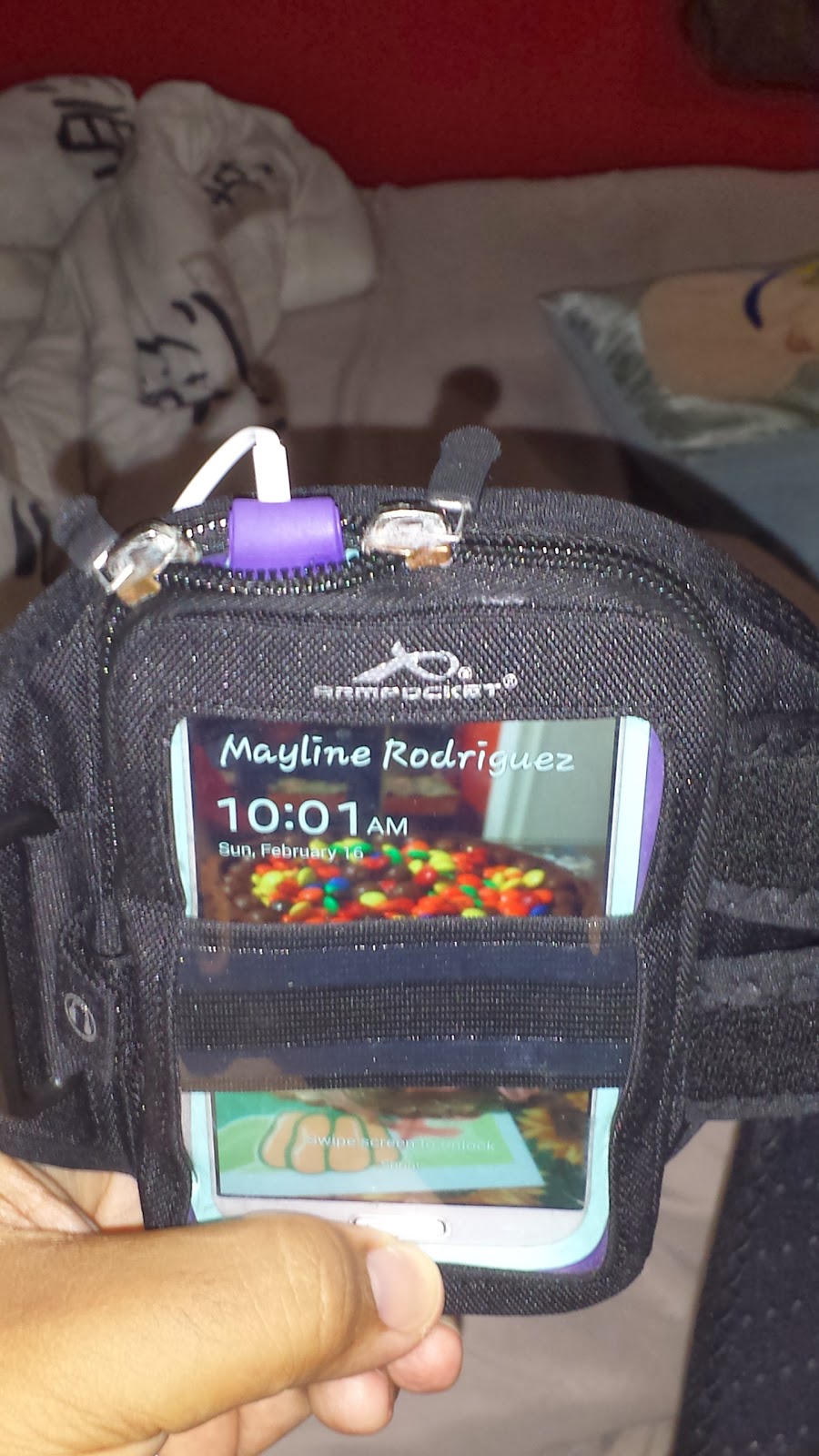 It closes, but there's a little oops.

The other issue is this elastic band inside the i35. 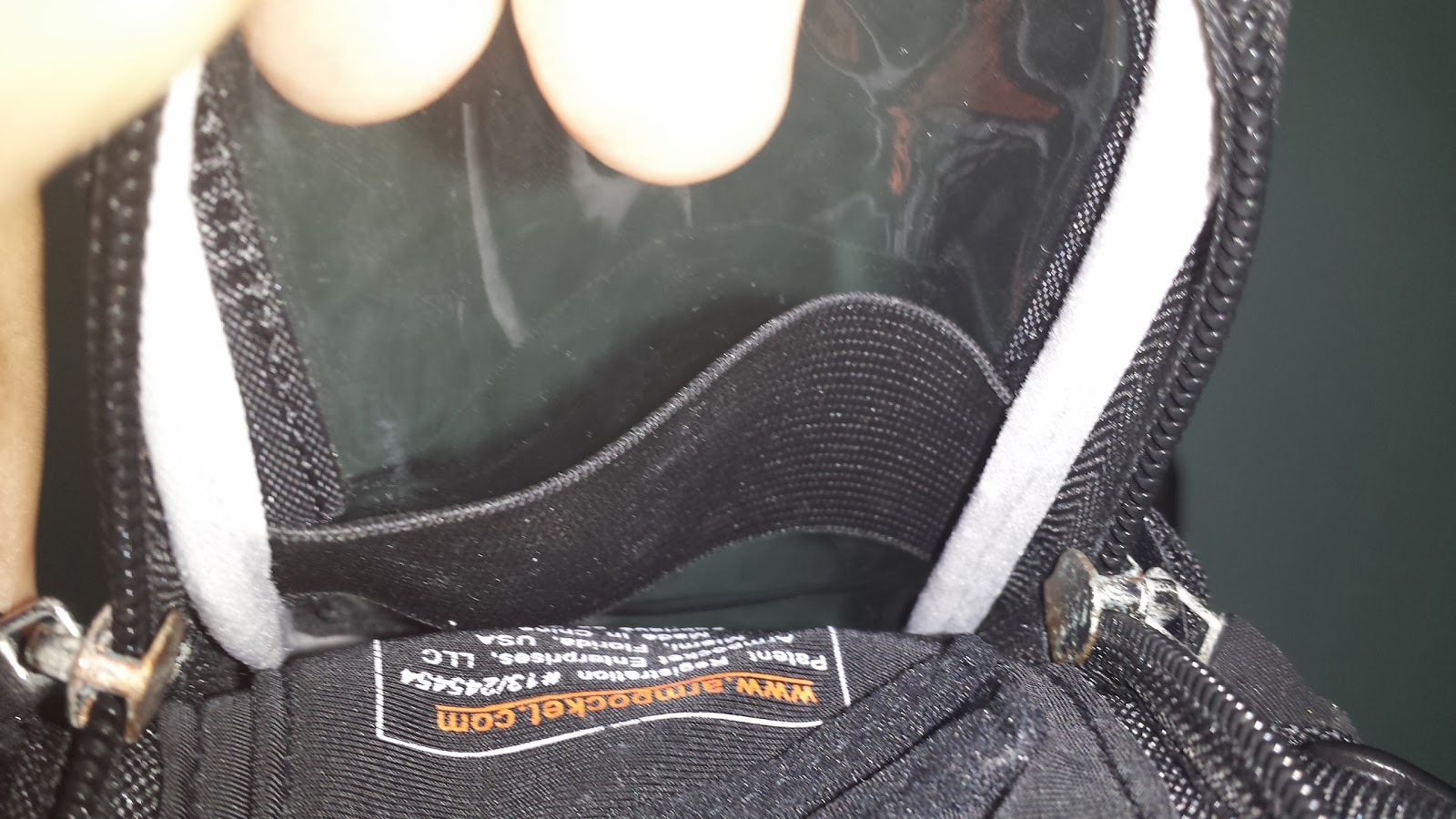 See that elastic band? With the Otterbox, that's a problem.

It is designed to keep your phone's screen flush with the front clear window so you can use the touchscreen. It is a great idea in theory but one little problem: with the Otterbox on, the band won't work. It's just too tight. You really have to force it in there and after managing to put it in there once, I haven't done it again because I don't want the elastic band to sag which it surely will after several uses. Which leaves you with putting the phone without using the band. Sure enough, the phone now fits but the band now obscures the touchscreen and you can't use it. In all fairness, the top third of the screen is still visible, which is where the music controls show up in the phone's lock screen so you can have some control over those features but anything beyond that will require you to take the phone out which again, with the Otterbox, can be a chore. Also, those pockets I mentioned to put other stuff in? Useless if you are using the Otterbox. It's just too bulky and there is not enough space left for anything else.

Which leaves me with the good news. Great news actually. Without the Otterbox to get in the way, things get exponentially better. When dealing with the phone by itself, everything changes. The phone slides easily into the i35 and the elastic band actually makes sense. Even with the headphones, you can zip it up all the way(and you can actually use those holes in the bottom) and have plenty of space for money, credit cards and even gels and the like. You could put keys in there but if your key chain is too bulky I wouldn't try it. The touchscreen can be used completely and without problems.  The i35 was ultimately designed to be used this way in my opinion. Not with the Otterbox. 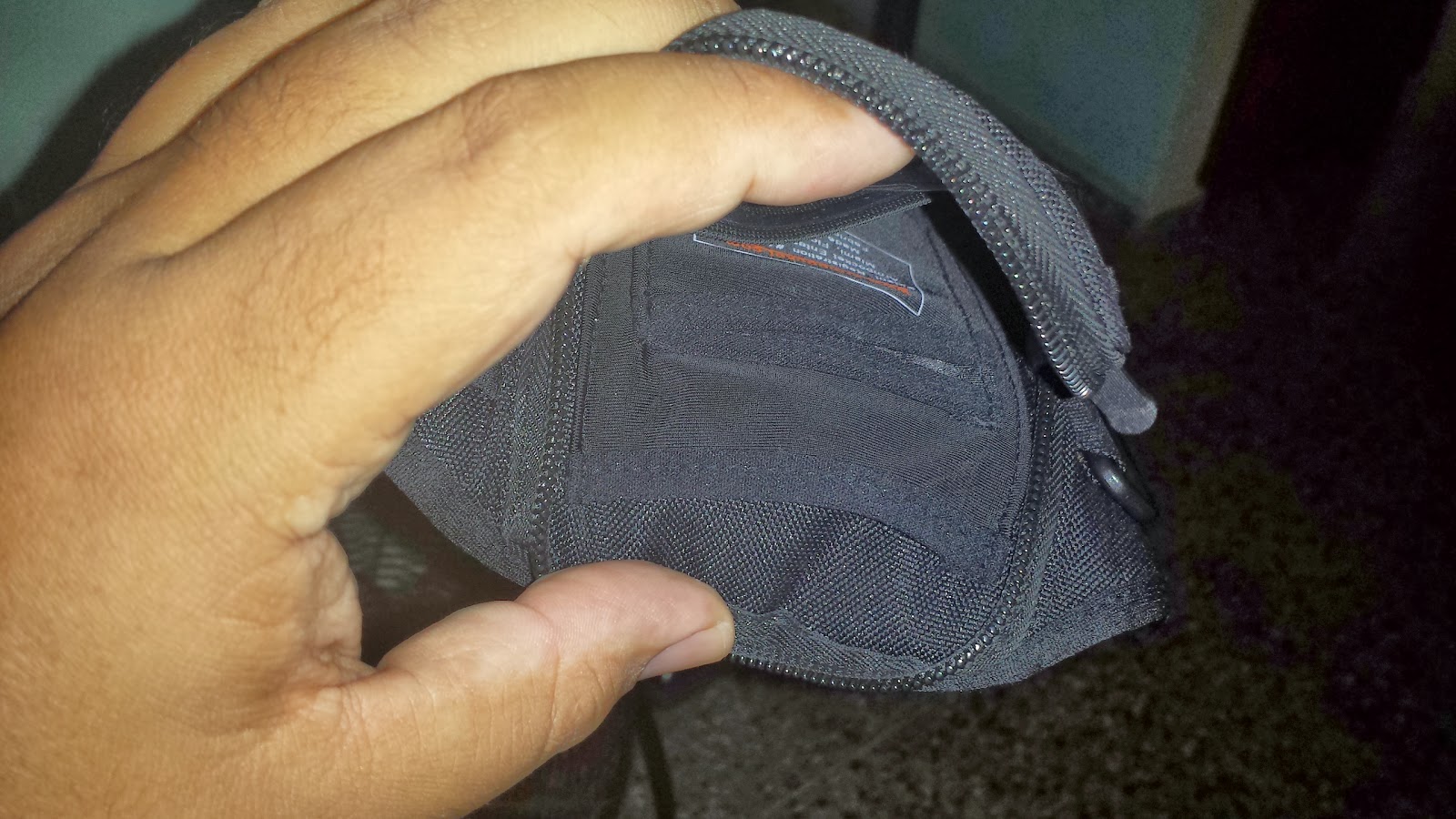 Lots of handy pockets for stuff.

And herein lies the issue with the i35. Many are probably thinking: "What's the problem? Just take out the phone from the Otterbox and problem solved." It's not that simple. The Otterbox is designed to be on all the time. Have you tried to take a phone out of an Otterbox recently? Over the long term, I don't see a lot of people regularly taking their phones off the case to go running then putting them back in. I would get annoyed very quickly. I suspect a lot of people would as well.

As it is, I'm currently using the i35 with the Otterbox on maybe 85% of the time. I take the Otterbox off for races and other occasions when I actually have time to prep things, including the phone. However, during my regular runs throughout the week I just suck it up and sacrifice some convenience and comfort in favor of quickness.

Having said all that, I have to also say that for bigger smartphones, the i35 is truly the best solution out there right now. Ultimately, it's not that the i35 is badly designed or built. I think it's just badly advertised. Armpocket clearly states that the i35 will hold a Galaxy S4 with an Otterbox, and while it does, it barely does so and it's at the expense of comfort and convenience. Where this arm band truly shines is when you don't have an Otterbox or other protective case. But I have to ask. These days, how many people don't have some sort of case on their phones?

The i35 is nicely built, very sturdy and high quality. When used properly, with out a case, it is the very best deal out there. Just be aware when you purchase, about the case issue.