I was avoiding this for some time, but I finally gave in and bought a hydration belt. A while ago I mentioned on this post, that I didn't want to be the fat guy running with every piece of gear he could carry (and buy). For the most part I have done my best to avoid it but you know, a tech shirt here, an iPod holder there... The hydration belt was the proverbial line I would not cross. "Those are for either posers or really serious runners." I thought. But alas, need has caught up with me. I have become THAT guy. All I need now is some knee-high compression socks and some ridiculously expensive sunglasses to complete the transformation.

All kidding aside, the whole issue that prompted this is very simple: The long run. It's starting to actually become, well... long. I can run seven, probably eight miles without water during the run if I really push it, but beyond that, I need to plan in advance. Also, consuming gels require plenty of water (according to the instructions) so you got to have something for that as well. During races, you got hydration stations and if you plan accordingly you probably don't need a belt but if you intend to train for those races...

In my effort to avoid the belt I tried several things. Carrying a bottle in my hand was a disaster. It threw my form off and it becomes really uncomfortable as the time passes. Then I tried hiding said bottle somewhere along the course I intended to run which turned me paranoid someone would find it. Then I tried to adjust my long run so it would pass through my house at least once and I would leave the bottle in the mail box. It didn't always work. Finally, I was watching Spirit of the Marathon on Netflix (awesome documentary by the way) with my wife. She saw all the runners there with belts on and said "Honey, you should get one of those." SOLD! Two days later I went to the LRS (Local Running Store for the uninitiated) and arrived home with my new toy. 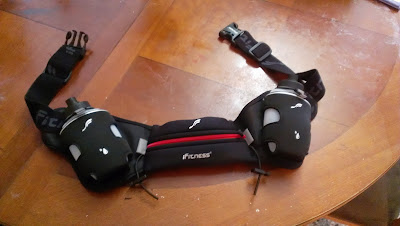 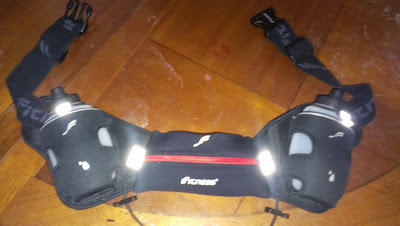 Check out the reflective strips. Pretty handy at night

I bought the 16oz. XL version, which means it has two 8oz. bottles and fits people with bigger waists but it comes in smaller sizes and there is a 12oz. version. Based on what I read online, I was worried I was too fat for the belt to fit but there were no problems at all. There was room to spare. It fits very comfortably and it is obviously designed for runners. Once properly adjusted it fits very snugly without being bothersome. The biggest complain runners have with these things is that they move around a lot which can get annoying (and painful) but this fits just right for me. Bonus: You can use it either way. With the bottles and pocket in front or back. 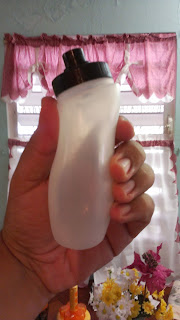 Looks small in my hand but it will hold 8 oz.

The bottles by the way are very interesting. They have this seal on the spout that easily gives way when you suck on the spout or press the bottle but immediately closes up when you stop, thus restricting water flow (and a very wet mess in you shorts). It's cool but I wonder how it will hold up with repeated use. They are secured to the belt by elastic straps. Once they are in place, those babies don't move at all. The center pocket will allow you to carry even the biggest smartphone. My Brother in Law's Galaxy Note II fit with a lot of room to spare. I think it's made of neoprene but I don't think its waterproof. The adjustment clips double as holders for gels and you will need them if you plan to carry several of them for longer races.Gel packs are large and I'm not sure you can fit all you would need for a marathon in the center pocket. Of course this depends on individual needs so it will vary person to person.

It is also worth mentioning that the system is expandable. There are several add-ons for extra water bottles, cell phones and the like.

After taking it out on my most recent long run I have to say it did not disappoint at all. There is absolutely no bouncing to speak of or any annoying sloshing of water in the bottles even when they are partially filled. It did take me a couple of miles to adjust it properly as I had set the belt to the max size. The belt would slowly slip down to my butt mainly because of the weight of the full bottles but after some tightening and finding the proper position it stayed in place no problem. I have to add that tightening the belt does NOT put any extra "squeeze" on your waist. The whole thing is elastic and will not put any unwanted stress on your waist.  I also have to add that I have no butt, therefore making it easier for the belt to slip down. If you have a butt you might not have the slipping problem but again, adjusting the belt properly will solve the problem easy.

So there you go. Hope this helps anyone thinking about a hydration system for their runs. I highly recommend the iFitness belt. It's comfy and practical and allows you to carry a lot of stuff like gels and phones or whatever you need it to plus, it's expandable. For around $40.00 retail, it is also reasonably priced in my opinion. For more info, here is their website.
Posted by Unknown at 11:43 AM