Well, I'm back from an amazing Disney cruise. We had tons of fun. Without going into the details, this isn't a travel blog (maybe I should do one of those...) I can tell you the best way to describe this vacation in one word is: Magical. 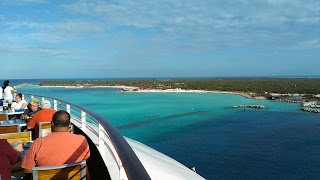 However, the important thing about this cruise, as far as this blog is concerned, happened on the last day when we stopped at Disney's private paradise island Castaway Cay. Way back, when I booked this cruise and learned about a race held there called the Castaway Cay 5K, it got me into running. Running this race was the initial goal that started this whole adventure and while my long term goals have sure changed (now I want to run the Walt Disney World Marathon in 2014) this little race is a fundamental part of why I'm running today. I was extremely excited to cross this 5K from my list.

The race itself is not a big deal in practical terms. It is basically another cruise activity you can do during your cruise. It has caught on with guests though, so over the years they have added bibs (with the Run Disney logo) and a timing board. They have also modified the course somewhat according to those who did it a while back. It is flat as a pancake and takes place inside the island so there is not much to look at. Looking back, I wonder what it was about this race that made me think it was doable. But human beings are weird that way. You never know what is going to trigger them into doing something crazy.

Last post, I gave you the recap of the 5K I ran the week before the cruise. Craziest race ever (sordid details here) by a long shot. The week after that I was pretty sore so I did not run again until I was on the cruise where I did a 2 mile practice run on the ship. Yes, ON the ship. The Disney Fantasy has its own jogging track on Deck 4 (The 4th floor for all you land lubbers). 2.5 laps equal 1 mile and I did two miles. Funny thing is, the cruise changes time zones a couple of times and I got a little confused so I ended up running at 3:30 in the morning. Now wonder I was all by myself!. Despite that, I felt pretty good during that run. The rest days really refreshed my legs. Plus, I felt like Denzel Washington in "Crimson Tide". You that scene where he is running inside the sub? It kind of felt like that. In the Fantasy you are running right below the life boats and there are all these pipes and machinery so I could almost hear the movie soundtrack in my head.

On race day, all the runners were told to meet at The Tube (a disco made to look like London's subway). There we signed up and were given our bibs and instructions about the race. This was not a motivating scene. I saw many people who looked like serious runners and many more wearing shirts that said stuff like "Historic 10K" and "Ultrarunners of St. Louis". Quite a diverse (and might I say fit) crowd. 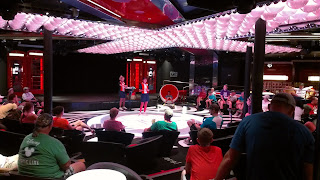 You don't see a lot of pre-race meetings at places like this.

From there, we were the first ones out the ship and we walked from the ship to the start line which made for a nice warm up. At the starting line, there a was a time clock and a map of the island. We were shown the route of the race and after a quick trip to the bathroom we were off! 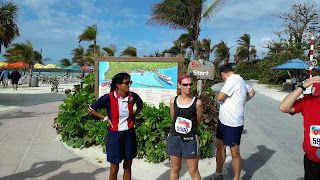 Now, sure, this was a goal I had set a long time ago but I had no delusions of grandeur or anything. I was on a cruise. I hadn't run that much in the past two weeks and... I was on a cruise. I mean, do I have to say it? I ATE EVERYTHING! So even though I knew the course was mild and flat there were no expectations of any kind. My last 5K I did 47:30. My best time running three miles has been a practice run: 44:38.

Sure enough, after the start, everyone fell into their respective paces and I ended up in the back, a bit ahead of the walkers. I was running a bit faster than usual but decided to keep it up since the course was flat but after a while I dialed it back. While the temperature was pleasant, the sun was really showing off that mid-morning power and besides, I started having a very interesting, albeit funny, problem. At first, I thought I was getting dizzy because of the sun. But it wasn't "normal" dizzy. At least that is not how I've felt dizzy before. After a couple of minutes I figured it out. I was Land-Sick! LOL. After a week on the ship with only brief exits I was feeling the movement of the ship while on dry land. It reminded of the film "Waterworld" with Kevin Costner where at the end he leaves because the ground "Doesn't move right."  Every time I felt the "sway" it was like my body trying to cross from one side of the road to the other. After identifying the cause, I laughed and kept going.

Halfway through, I had another little event. This time a mental one. Back when I started running, I read about Jeff Galloway and his run/walk/run method. While I felt his method was probably the most sound for a person that is overweight like myself, I decided to try and just run, even if I progressed slower. Now, I'm in no position to question Jeff Galloway in any way. If he says it is the most efficient way, I believe him. For me it was an ego thing. If I'm going to run, I want to run the whole race. That's it. I didn't think I would be faster or better, I just wanted to run the entire distance in front of me.

At the end, I picked up the pace and finished strong. My one goal for the race was for the Cast Members (that's what Disney calls their employees) in charge of the race to not leave before I got to the finish line. Basically, they told us they would be at the finish line for a while handing out medals and if they weren't there when you finished they would send the medal to your room. It sounds like a stupid thing but I wanted to receive the medal at the finish line. After the final turn I saw the finish line there they were with the medals. Yes!!!! But wait, what about my time? As I crossed the finish line, I look to my left and there is the clock...

Can you say Personal Record?!! Yes. I. Can. Doing the happy dance! I mean, I'm doing the happy dance now... Back at the finish line I could barely breathe. The Cast Member put the medal around my neck. Oh yeah! It felt so good. Of course, Disney does not waste any revenue-creating opportunity so right next to the finish line was a store selling what else? Castaway Cay 5K T-Shirts! Of course, me not wasting any Disney income-reducing opportunity, bought the shirt to commemorate the occasion.

And that was it. Another goal met. The race that got me into this whole thing has now been checked off my list but, it was at the beginning of my list. There are many things to cross off in the future. Next steps? I think its time to start considering a 10K. Perhaps the World's Best 10K? One of the biggest races in Puerto Rico being held at the end of February? Sounds like a plan to me. Also, with this race (and this cruise) behind me, I think its time to start tackling the other part of this lifestyle equation: Nutrition. Stay tuned folks. The best as they say, is yet to come
Posted by Unknown at 8:17 PM