Lady and the Frank?

I rarely post about non-running stuff. Not because I don't want to, but more because so far this running thing has kept me pretty busy. It's hard to truly make something a part of your regular life so for the better part of almost a year and a half, most of my happenings in life have in fact, been running related. Then stuff like the following story happen and they totally change you daily routine...

Let state, for the record, that I am not a dog person. Or a pet person for that matter. Not because I don't like dogs or pets but because of past experiences with pets when I was a kid. The concept of "pets" when I was growing up was reserved to some sort of puppy arriving in our household, the family getting pretty excited about it for about three seconds then the poor dog eventually being relegated to second-class status, ending up tied in the backyard, with the only interaction from us being his daily feeding. On the other hand, being a child of the movies, I constantly saw the "idealized" version of pet ownership. In the movies, pets are all extremely smart, obey every command and go to the bathroom on cue. Not to mention loyal to a fault and the ability to save your life if you ever fell on a well. So, not wanting what we had at home, and being certain I could not train a dog to do what dogs did in the movies, I decided early on that I was not going to allow pets in my house. Then I got married and had kids and the subject of getting a pet would spring up constantly. There almost seems to be a law that requires families to get a pet so when you don't have one everyone asks "when are you gonna get one?" I would patiently explain what happened to pets at my house and that I didn't want that. Plus, do I really need one more mouth to feed? Things are tight as it is you know?  My wife, who wanted a dog, supported my decision. Even though she wanted a pet, she though my logic was understandable so my house was a pet-free environment. Since I had made our position clear to our friends and family, I thought that's the way it wold stay.

Then, two weeks ago, we go shopping and on our return home, I notice this on our front porch: 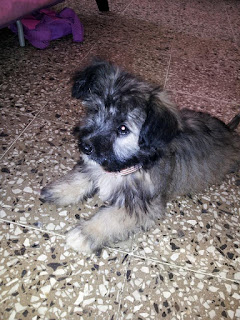 She was dirty, hungry and limping on one of her front legs. Despite that, she seemed to have taken ownership of the porch as she didn't seemed to be scared by our arrival at all. As my wife - who had stayed behind to let the girls off the mini-van while I opened up - walks up to me with the girls in tow, all hell breaks loose:

Girls (screaming): LOOK! Dad bought us a puppy! How cute!
Wife (laughing hysterically): Oh my God!
Me(hysterical): No no no no no!

Folks, at that point I had a vision. I knew exactly how this was going to end and it was not gonna be with a dog-less home but this was a dog from who knows where so I had to be careful to not let emotions run high. For the next couple of days I drove around the neighborhood asking if anyone lost a puppy or knew about someone who did. I even posted on Facebook for help. But, alas, it was not to be. After a week, my wife started asking questions. "What are we gonna do with the puppy?" Which was her polite way of saying: "I am in love with this dog and so are the girls. PLEASE lets keep it?!!?

Now, understand that I might not be a dog person but that doesn't mean I'm cruel or hate animals. I wasn't about the put that dog on the street (though I admit I let her sleep on the porch on the hopes she would continue on somewhere else) and giving it to a shelter meant she could be put down if they could not find an owner so its not  like I was totally against the idea, but on the other hand, I know nothing about dogs. Not a thing. My friends and family laughed amazed when I asked for help identifying what "brand" of dog she was. (She's what? A chihuahua? A Toyota?) I was really concerned this ignorance would lead to my biggest fear of pet ownership: A dog tied in the backyard that everyone ignored and was annoyed at "having" to feed her. You get pets for that.

So, I sat everyone down and after A LOT of thought, announced we were gonna keep the little hairball. But I was very clear that this was gonna take an effort on everybody's part to make this dog a part of the family and that meant housebreaking and proper training. My girls wanted to call her Rudy (Doc McStuffin's neighbor has a dog named Rudy) so after explaining that was a boys name I suggested Lady, from Lady and the Tramp which my wife loved. I took her to the vet where she was treated for the leg thing and got the required shots and treatment. Then I went to Petsmart where I was reminded of two things: I know nothing of dogs and this is gonna get expensive. But we now have a new family member: 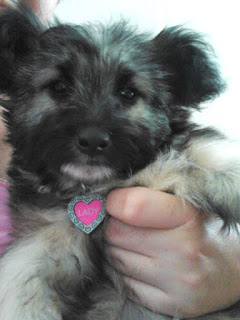 This new development has sent me into total research mode of course. Trying to learn as much as I can about dogs and how to train them. I have books, rented shows and DVD's and have done a lot of reading on line. That's what I do. Frank the Dog Whisperer. Man, have things changed around our house but hey we did a good thing (everywhere I take her or talk about her, they applaud the fact we "rescued" her) and who knows I might even have a future running buddy. I write rescue in quotations because I'm not sure we did rescue her. Maybe, she chose us.

PS: I still don't know what brand uh... I mean breed of dog she is but the vet said she was most likely a mix. Though I did see a picture of a Glen of Imaal Terrier puppy that looks almost identical to her.